On this night in Canadian history, in 1868, Thomas D’Arcy McGee was shot and killed just as he was about to enter his rooming house on Sparks Street in Ottawa.
0
Apr 7, 2016 2:43 PM By: Mike Commito 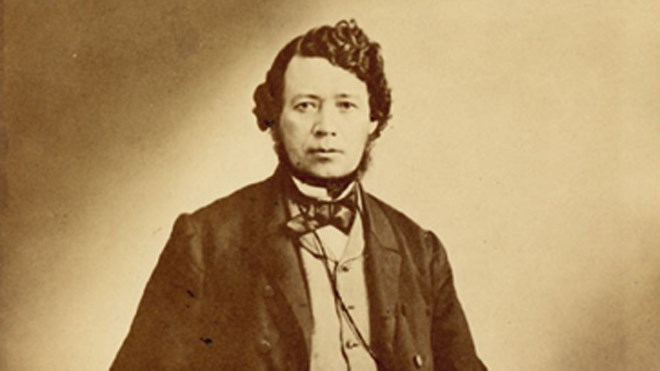 Federal MP Thomas D’arcy McGee, the MP for Montreal, was assassinated on this day in 1868. It was Canada’s first political assassination. Source: Library and Archives Canada

On this night in Canadian history, in 1868, Thomas D’Arcy McGee was shot and killed just as he was about to enter his rooming house on Sparks Street in Ottawa. McGee, Member of Parliament for Montreal, was likely assassinated for his political positions, particularly for his outspoken views on Britain’s rule over Ireland.

His stance on the “Irish Question,” as it was commonly known, was that Ireland should remain a part of the British Empire. This opinion, which would have been very unpopular with many Irish of the day, was made even more complicated because of the Fenian Brotherhood, a militant Irish-American organization dedicated to seeing a free Ireland.

After the conclusion of the American Civil War, the Fenians launched a series attacks against British North America in the hope that this would put pressure on Britain. However, the impact of these attacks was quite limited, but McGee’s continued opposition to the Fenians made him public enemy number one in their books.

If you were to compare the Leafs game sheet from Oct. 7 to tonight’s prospective lineup, you would notice some significant changes. It looks like Toronto will only have six skaters from the season’s first game in action for tonight’s tilt against Philadelphia. Among the notable absences are Nick Spaling, Shawn Matthias, Daniel Winnik, and Dion Phaneuf, all of whom were traded. While guys like Joffrey Lupul, James van Riemsdyk, Peter Holland, and Leo Komarov are currently in the infirmary. In addition, Nazem Kadri was recently suspended four games, after trying to decapitate Detroit’s Luke Glendenning last weekend, making him ineligible for the Leafs penultimate game.

Is Montreal’s season over yet? This is a pretty common question amongst the growing apathetic Canadiens fans who are already looking ahead to next season when they hope to see Carey Price, with a rehabilitated knee, back between the pipes and, possibly, a new face behind the bench. Heading into Carolina, Montreal is 3-1-1 in their last five meetings in Raleigh and 5-3-2 in their last ten. Meanwhile, Hurricanes forward Jeff Skinner is quietly having himself a great season after his numbers dipped last year. The 23-year-old has 28 goals and is having his third most productive season since breaking into the league in 2010-2011.

With the Panthers clinching the Atlantic on Tuesday night, they are now beginning to gear up for what they hope will be a deep run into the playoffs. With the Division locked up, they will play the Eastern Conference’s first wildcard holder, which is currently the Philadelphia Flyers. Ottawa’s captain, Erik Karlsson, now has 80 points, the most amongst defenceman since 2005-2006. He will be looking to add to that total tonight and stay in the running to be the first blueliner since Paul Coffey in 1985-1986 to finish Top 5 in league scoring.

At this time last year we were gearing up for a first-round playoff matchup between the Canucks and Flames. Sadly, as you may have heard, this is the first time since 1970 that there will be no Canadian NHL teams in the Stanley Cup playoffs. The last time this happened, the Bruins and Blues met in the Finals, with Boston sweeping St. Louis in spectacular fashion. Bobby Orr, in his only goal that series, scored the overtime winner in game four and, in the process, created one of the most iconic images in hockey history.

Joe Thornton, who will be turning 37 in July, is having his most productive season since 2009-2010. Not only is he leading his team in points, but he is sitting second in the league with assists (61) and fifth in total points (79). It’s certainly been a banner year for the NHL’s grizzled veterans. In Florida, Jaromir Jagr (44) is now the oldest player in league history to score 60 points in a single season. Meanwhile, his teammate Roberto Luongo, who recently turned 37, has the 9th best save percentage at .922. It should be lots of fun to see what all three of these ageless wonders can do in the playoffs.

Last Minute of Play
McGee was a Father of Confederation and known for his brilliant skills as an orator. As both a poet and politician, McGee believed that Canada needed a national culture to bring people together. For him, “every country, every people must create and foster a National Literature, if it is their wish to preserve a distinct identity.” At the time of his death, he had penned 10 books and written hundreds of poems.

Thanks for reading and following along this regular season. Not sure if this the type of inherently Canadian writing that McGee had in mind, but it doesn’t get much more unique than a Frankenstein of Canadian history and National Hockey League previews.