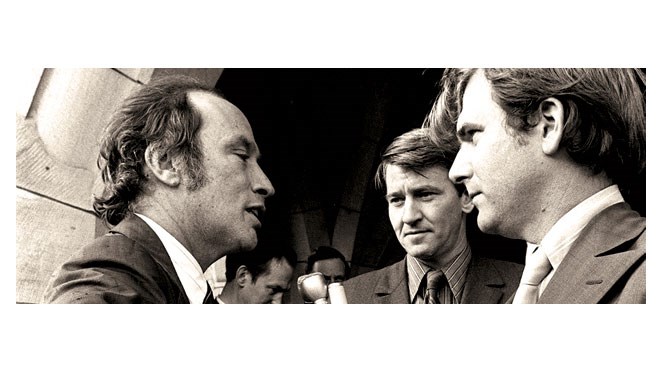 Prime Minister Pierre Trudeau answers questions on the steps of Parliament Hill in 1970 during the FLQ crisis and his decision to invoke the War Measures Act. Photo: Peter Bregg /CP

Canadians love hockey. It's part of our history. It's part of how we see ourselves and our place among the nations of the world. Canada is hockey country.

The return of the NHL season means the return of Sudbury.com’s History ‘n’ Hockey series. Originally launched in February 2015, it focuses on NHL matchups involving Canadian teams and places them in the context of notable anniversaries in Canadian history.

Each entry involves a game preview, featuring notable trends or storylines throughout league and is concluded with my predicted outcome for the game.

Over the last two seasons we have explored notable moments in Canadian history ranging from Harriet Tubman to the Avro Arrow and the Balfour Declaration to Japanese internment.

We’ve logged 22 columns so far and my prediction record is 42-42. Basically, I’m no better at prognosticating hockey games than the loose coin you have in the pocket of your jeans.

If you’re reading this for betting purposes, you’ll likely be disappointed, but if you’re looking for fun and unique ways to connect Canadian history to NHL hockey then you’ve come to the right place.

Join us every second Thursday this NHL season as we continue to bring you History ‘n’ Hockey.

So, here we go with the first column of the new hockey season.

This week in Canada history, in 1970, Prime Minister Pierre Trudeau uttered one of his most iconic phrases when he spoke with CBC reporter Tim Ralfe.

While on his way into Parliament, Trudeau had an impromptu interview with Ralfe. The encounter occurred during what would be known as the October Crisis in Quebec. The origins of the crisis dated back to the formation of the extremist organization, Front de libération du Québec (FLQ) in the early 1960s.

Five days later, the group abducted Quebec’s Labour Minister, Pierre Laporte, from the front lawn of his home. In response to these incidents, Trudeau called on the military to increase national security and also talked about taking more drastic action to mitigate the crisis.

Some people felt uncomfortable by the sudden presence of armed military personnel and tanks in Canadian streets.

When Trudeau spoke about that issue with Ralfe, he said, “Well, there are a lot of bleeding hearts around who just don't like to see people with helmets and guns. All I can say is, go on and bleed. But it's more important to keep law and order in this society than to be worried about weak-kneed people who don't like the looks of—"

At this point, Ralfe interrupted the prime minister and asked him how far he would be willing to curtail civil liberties in order to maintain law and order. Trudeau shrugged and simply said, “Just watch me.”

The term October Crisis is typically reserved for that moment when Leafs fans look at the team’s roster at the beginning of the season. At least that’s what it was known as prior to 2016.

With Toronto landing Auston Matthews at the NHL Entry Draft and the possibility that William Nylander and Mitch Marner are nearly approaching the start of their tenure with the Maple Leafs, the future is beginning to look brighter in the Big Smoke.

While the Buds are still a long way off from being a competitively viable team, the maturation of key players up front and on the blue line will go a long way towards elevating the intensity level in the Battle of Ontario.

Last season, the Senators won both of their home games against the Leafs by a goal differential of +9. Heading into tonight’s contest, Ottawa has the edge over Toronto at home as they are 36-28-1 at the Palladium the Corel Centre Scotiabank Place the Canadian Tire Centre.

When the Oilers hired Peter Chiarelli as general manager in April 2015, many speculated about how we would shake up Edmonton’s core. Some believed that he’d be an ideal triggerman, willing to make the tough moves that his predecessors failed to execute.

After all, during the 2013 offseason, when he was still the GM of Boston, Chiarelli traded rising star Tyler Seguin to Dallas. While the move was immediately panned, it has come under more scrutiny in recent years, as Seguin has racked up 234 points in 223 games in the Lone Star State.

Following a rather quiet first season at the helm in Edmonton, Chiarelli’s first big moves finally came this past summer. Just days before free agency, he traded Taylor Hall to the New Jersey Devils in what has universally been condemned as one of the most lopsided deals in recent memory.

While the move may help bolster the Oilers blue line, the transaction also had some philosophical motivations. Hall is one of the most dynamic leftwingers in the league and that’s just something you don’t give away, unless you think the fit is no longer tenable.

It’s worth remembering that Hall and Seguin were selected first and second overall in the 2010 NHL Entry Draft and now Chiarelli has the dubious distinction of trading both of them.

Then, last week, Chiarelli traded the 2012 first overall pick, Nail Yakupov, to the St. Louis Blues for a prospect and a conditional third-round pick. While the Russian winger has struggled mightily at times in Edmonton, he’s also shown flashes of brilliance and this might prove to be another move that may cost the team in the long-run.

When Chiarelli and the Oilers held a press conference to discuss the recent move, a reporter asked him how many more young, talented players do you plan on trading away?

The general manager starred back and responded with, “Just watch me.”

Three days after his memorable exchange with Ralfe, Trudeau made good on his word and invoked the War Measures Act. Originally tabled during the First World War, this statute gave the government sweeping powers during times of a national emergency to maintain security and order.

When Trudeau and his cabinet activated this emergency order in October 1970, it was the first time the act had been invoked during peacetime.

Not long after the War Measures Act had been implemented, the body of Pierre Laporte was found in the trunk of a car near the Saint-Hubert airport near Montreal. The discovery only heightened fear and tensions, as British Trade Commissioner James Cross was still being held by the FLQ.

Using the broad powers of the statute, people could be arrested on suspicion of belonging or sympathizing with the FLQ and detained without charges. According to the Canadian Encyclopedia, it is estimated that “over 450 persons were detained in Québec, most of whom were eventually released without the laying or hearing of charges.”

When the dust settled, James Cross was found alive and members of the cell responsible for Laporte’s death were tried and convicted of kidnapping and murder.

While most had supported Trudeau’s decision to invoke the act, the move had its detractors, chiefly Quebec nationalists and civil liberty advocates. Nevertheless, it was the last time the War Measures Act was used and in 1988 it was repealed and replaced with the Emergencies Act, a statute with a much more defined set of powers and limited scope.

Check back in on Oct. 27 as we explore Dominion Day and three more games.