Column: I found some interesting things at the library in Lively 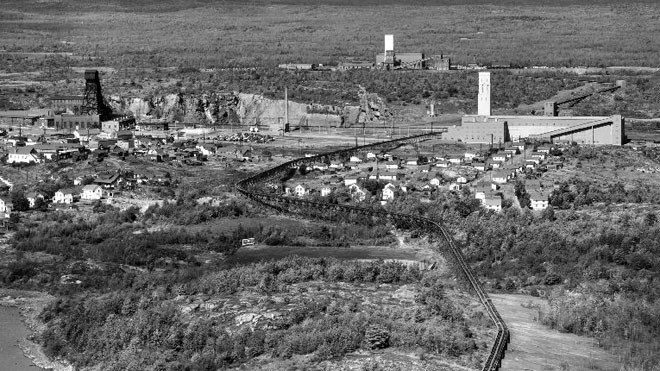 An undated aerial view of Creighton Mine, where “all our fathers, uncles and brothers worked,” says Erna de Burger Fex. File photo.

Recently, I spent an afternoon at the Lively branch of the public library.*

In a filing cabinet at the back, I discovered a vertical file containing most interesting material about the town of Creighton Mine. It also had material about the mine where all our fathers, uncles and brothers worked. In fact one family had four members working there at one time — the Mynerich Family. That group had Carlo and his three sons — Tony, Snug, and John. The date was unfortunately difficult to see, but I believe it was 1950.

A Creighton lovely who did our town proud was Stella Koraluk (later Vagnini). She was crowned Miss Creighton at the age of 18. Stella was described in the article I read, as ”an ardent athlete, excelling in badminton, skating and skiing. ” It was also noted that she had ”blonde curls and flashing blue eyes,” and danced at some function with Ontario Premier George Drew. That man definitely had a good eye for pretty girls.

Faye Jamieson was crowned Miss Credit Union – Sudbury Chapter, when she turned 18. She won out over 12 contestants. The beauty of Creighton girls was not to be denied.

Some may remember that the original Creighton Mine Credit Union building was once the town jail. I had heard that a long time ago, but had forgotten it.

When Dr. McGruther’s remarkable nurse, Lempi Stephenson, retired in 1962, a huge surprise party had been arranged for her at the Inco Club. She had been a nurse for more than 40 years. The first baby she delivered was John Dingwall, who now resides in Lively, age 90. Lempi was born in Copper Cliff, but at the age of six, her family moved to Creighton. One short year after her marriage to Dick Stephenson, he was tragically killed in a mine accident, leaving Lempi with a seven-week-old baby boy. He had been named after his father, Dick Stephenson. He  became a civil engineer.

Lempi’s brothers, Jack, Frank and John Anderson were all living at the old family farm with their mother and Lempi moved there after her retirement.

We know that farm today as the very busy Anderson Farm.

*An earlier version of this column incorrectly called the Lively branch of the Greater Sudbury Public Library as the Walden branch.