Reflections: The circle is complete and I’m a great grandmother (finally!) 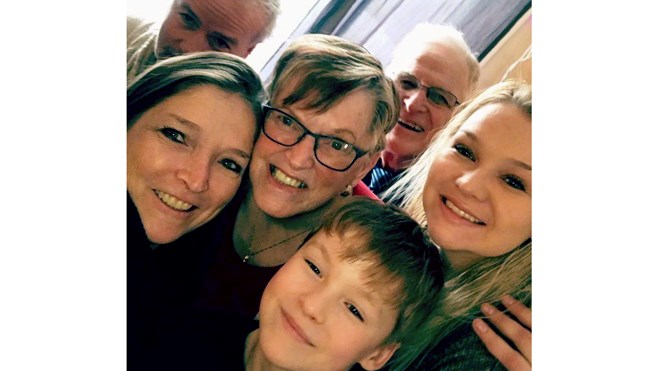 Columnist Erna de Burger-Fex (in the middle of the frame in eyeglasses) surrounded by family members young and old. The Dutch place particular importance on four generations, she says. (Supplied)

When a period of time is referred to as a generation, it is generally accepted as being about 20 years. When we think of the next generation we refer to those who come after us. So, that’s my children, nieces and nephews. Next, it’s our awesome grandchildren and if we’re fortunate, we are given the gift of knowing our great grandchildren.

When my mother was pregnant, my maternal great grandmother Camilla Thijs de Blok, eagerly anticipated my birth, hoping I would be a girl. This would make her the matriarch of four generations of females. (In Dutch culture, to be considered a genuine four generations all must be of the same gender.) Naturally, the fact that I was a girl pleased her immensely.

Her daughter, my grandmother, Emerence de Blok van den Branden, was also excited. They were so thrilled with me that, when I was 16 months old, they took me to a professional photographer to record the event. This was in 1942 during the war! (My great grandmother lived until I was 18 years old.)

I have attempted to explain that even if the first child of any generation is a different sex, it is still four generations. I cannot convince my Dutch relatives that this is so.

As the years went on, I married and subsequently my daughter Jacquie was born, making my grandmother the head of four generations. She was very pleased, but sadly only lived three more months. I still have the letter she wrote me expressing her delight.

Many years later, my daughter Michelle gave birth to Emily Susan McIntosh to our great elation. Now it had become my mother Alice van den Branden de Burger’s turn to be a great-grandmother.

Again, a new generation of our family had begun. Mom was acutely interested in this new baby girl and couldn’t wait to see her. This happened when the baby was six weeks old because of the distance involved.

When Emily was six years old, we had a professional photo taken that was very important to my mother, who was now the matriarch of four generations of my maternal family.

When Emily McIntosh, our granddaughter, gave birth to Aayden Alexander Robidoux, our great grandson, I experienced such euphoria and wonder. My granddaughter had a baby! It was difficult to comprehend at first.

Yes, he is male and is the start of the next generation just the same. The proud matriarch of this new generation is me, Erna de Burger-Fex. The thought that one day I would become a great grandmother never occurred to me when we began our family. But here it is, and he is such a blessing.

Does he make me feel old? No. Definitely not! I really enjoy our interactions. He knows and loves me as I love him and that makes me feel very happy!