There are many reasons to honour Remembrance Day

We owe many of the freedoms we enjoy today to military personnel
Nov 8, 2017 4:03 PM By: Erna de Burger-Fex- Reflections 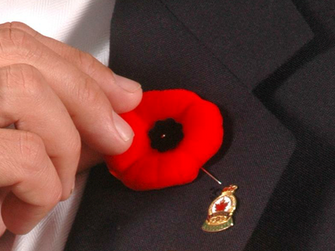 Erna de Burger-Fex writes that it's essential that we remember all military personnel who gave all for the freedom we enjoy today, and to wear a poppy with pride and acknowledgement during all of November.

Nov. 11 is known as Remembrance Day in Canada.

Thousands of Canadian soldiers lost their lives in the First World War — 1914-1918 referred to as The Great War.

It was in May of 1915 that exhausted Canadian surgeon Major John McCrea was moved by the bloody carnage surrounding him to compose the iconic poem, “In Flanders Fields.”

Observing the wild red poppies blossoming in the nearby cemetery and ditches, blowing in the wind, he was reminded of the colour of the soldiers’ blood on whom he had operated for 17 days straight.

Canadians fought in several other wars.

The Korean War from 1950-1953 has often been referred to as the Forgotten War, even though 25,000 Canadian troops served in that war. Of these, 516 died. They also must be commemorated.

Our soldiers were involved in other wars, such as Bosnia, Kosovo, Persian Gulf War, and, of course, Afghanistan. A total of 157 men and one woman died in this far-off land.

Because of this war, 70 military suicides have occurred — most when the soldiers had returned home. We learned about the devastating after-effects referred to as PTSD – Post Traumatic Stress Disorder — which caused traumatic flashbacks so realistic that the affected person felt he/she was reliving those terrifying episodes.

Many sought isolation, because they did not want to discuss it even with loved ones.

PTSD is treatable, but it is a long process of therapy, medications and finding a person whom they trust implicitly. For many, they could not go through this process. Let us recognize their efforts on our behalf on Remembrance Day, as well.

We know now that soldiers after the First World War suffered what was called shell shock and was referred to after the Second World War as combat fatigue.

These were all manifestations of PTSD as we know it today.

There are numerous reasons to celebrate Remembrance Day on Nov. 11. It is essential that we remember all military personnel who gave all for the freedom we enjoy today.

Wear a poppy with pride and acknowledgement during all of November.