Gentili: A quote from Einstein and the wonder of Christmas

Editor Mark Gentili’s children are getting older, but he’s not willing to let go of Santa Claus (and Stumpy the Elf) quite yet
Dec 25, 2019 2:00 PM By: Mark Gentili 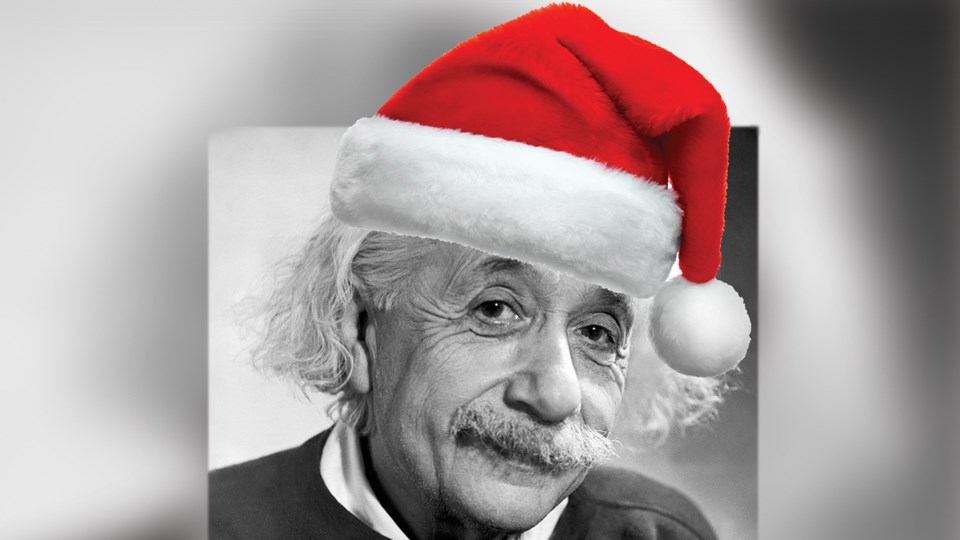 “The most beautiful thing we can experience is the mysterious. It is the source of all true art and science. He to whom the emotion is a stranger, who can no longer pause to wonder and stand wrapped in awe, is as good as dead.” Albert Einstein, “Living Philosophies”, Simon and Schuster, 1931

Things are a little different around Rancho Gentili though this year. The kids are older. Our son is 18, our daughter 14. Needless to say, neither one of them believes in Santa Claus anymore.

I do miss the days when they did. It’s part of that magic of childhood, when everything is fresh and new and their minds are so open to possibility that the thought of a strangely dressed old man in a beard breaking into our house to leave presents is as natural as the sun coming up tomorrow.

That said, I’m not looking to turn back the clock. For one thing, they’re much more self-sufficient nowadays, which means my wife and I have a bit more time to ourselves. Finally. For another, I like that I can have two-way conversations with my children. It’s amazing to see this creature that you once had to feed and clean and keep from harm burst from the cocoon.

Case in point, my son and I went to see Todd Phillips’ “Joker” earlier this month and then spent a good hour or so discussing its merits as a film. It was awesome (the film and the conversation).

The week before, I took my daughter to Toronto to see a concert and do a bit of shopping. It was her birthday gift. That 10-hour car ride, we belted out songs, discussed the media circus of the OJ Simpson trial and chatted about all manner of topics light and heavy. Again, it was awesome.

And while I miss the days when they were small and cuddly, this is the time for which I’ve been waiting their whole lives: for my children to become individuals in their own right, with their own thoughts and opinions, and to have actual, real conversations with them about those thoughts and opinions. It can be frustrating sometimes, but also enlightening and, frankly, just damn enjoyable.

However, as nearly grown as my children are, I’m not ready to give up on all aspects of their childhoods, even if they are. Children have this incredible sense of wonder and openness to possibility that adults tend to eschew (at our peril).

If we can, my wife and I want to preserve in our children at least a seed of that ability to experience the marvelous. That Einstein quote at the beginning of this pretty much sums up what I’m talking about.

To that end, we’re not giving up on Santa Claus anytime soon. Nor are we giving up on Stumpy the Elf. Maybe that sentence requires a bit of explanation.

When our son was very small, we introduced him to our family Christmas elf. Every family has one. Santa is too busy to keep an eye on the doings of millions of children, so each family is assigned a Christmas elf, a friendly spy for the big guy.

On Christmas Eve, while everyone is otherwise occupied and if the kids have been reasonably good all year, Stumpy leaves a gift bag outside our door with Christmas pyjamas for them, and a letter listing some of the good, and some of the not-so-good, things the children did this year.

Listening to them read the letter from Stumpy is always a gas and a source of much giggling. (Stumpy’s a pretty funny writer if I do say so myself.) The letter is always a real treat.

And there will be gifts from Santa Claus under the tree this year, and every year for the foreseeable future. We’ll all play along and preserve some of that Christmas magic.

A feeling of magic, a sense of wonder, a touch of mystery — these add colour to the palette of life. Preserving that beyond childhood jams a wedge of wonderment between the world of the child and the too-often jaded, grey world of adulthood.

Hang onto the marvelous, folks, and have yourselves a merry little Christmas.