Gentili: Don’t be distracted by the Tickle Trunk sideshow of campaigning politicos

Campaigns are full of stunts aimed at getting your attention, but voters deserve to know what ideas and plaforms candidates are defending
Oct 2, 2019 12:00 PM By: Mark Gentili 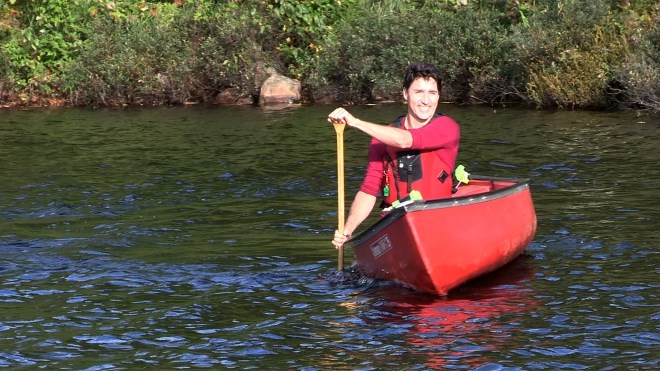 Elections today often see party leaders engaging in all manner of lame stunts to get attention – and, most important, to appeal to a certain demographic.

When Trudeau paddled aimlessly around a bay on Lake Laurentian on Sept. 26 — as local and national reporters waited for him to finish, struggling to keep their eye-rolling in check — it was just another in a long line of press conference stunts from Canadian politicians.

Frankly, paddlin’ Trudeau called to mind former Canadian Alliance leader Stockwell Day’s arrival at a press conference in 2000, zooming across Lake Okanagan on a Sea Doo in a tight-fitting wet suit. He was widely panned for it.

Trudeau, probably unjustifiably, got more of a gentle ribbing.

Either way, the press conference stunt is a tried and true political tactic. And frankly, I’m sick of it.

In 2019, policies themselves are too often political in nature – rather than sincere platforms, they are craven attempts to buy votes by reading the demographic data, and turning them to a candidate’s advantage.

Former Ontario Liberal Premier Kathleen Wynne’s campaigns were famous for this. Promise something for everyone, don’t worry about the cost, and figure out the rest later.

Years ago, I read former U.S. vice president Al Gore’s book “The Assault on Reason.” Gore talks about campaigning and how, as his political career unfolded, campaigns became less about ideas and more about data — if I espouse this belief, I can pull this many voters from this demographic; if I criticize this notion, I can steal this many voters from my opponents.

Campaigns and governing have become about hedging, about voting blocks, demographics, positioning statements, messaging. Press conference stunts are part and parcel of this system, and hokey as they are, they won’t go away.

I’m not singling out Trudeau. He’s no better and no worse than anyone else. He’s just the latest example that springs to mind.

In a perfect world, it would be par for the course that a politician for a major political party presents a concrete set of ideas and stands by them. It would be common for a politician to answer questions without sticking to talking points, positioning statements and messaging.

This isn’t an endorsement of either, but in this election, only Green Leader Elizabeth May and People’s Party leader Maxime Bernier are doing that, perhaps because neither have much chance of winning. Perhaps that fact is the source of their candour. Either way, I find that candour refreshing.

Since we’re not going to see an end to the political campaign Tickle Trunk of costumed politicians trying to be all things to all people, I encourage you to enjoy campaign press conferences for what they are: distractions, sometimes amusing, sometimes infuriating, sometimes embarrassing.

But if you want help deciding where to cast your ballot, go to the source: read the platforms of the parties and see what it is they plan to do exactly. And meet your local candidate, read what they have to say and decide if you think that person has the chops to fight for you and for your riding.

In the end, that’s all that really counts.

Gentili: Stop hoarding toilet paper and start social distancing
Mar 18, 2020 10:15 AM
Comments
We welcome your feedback and encourage you to share your thoughts. We ask that you be respectful of others and their points of view, refrain from personal attacks and stay on topic. To learn about our commenting policies and how we moderate, please read our Community Guidelines.