Reining in payday lenders and the Le Ledo nothingburger

Kudos to council for pushing back on payday lenders. Plus, if you’re going to propose a development and refuse to be public about who you are, why should anyone take you seriously?
Oct 30, 2020 5:00 PM By: Mark Gentili 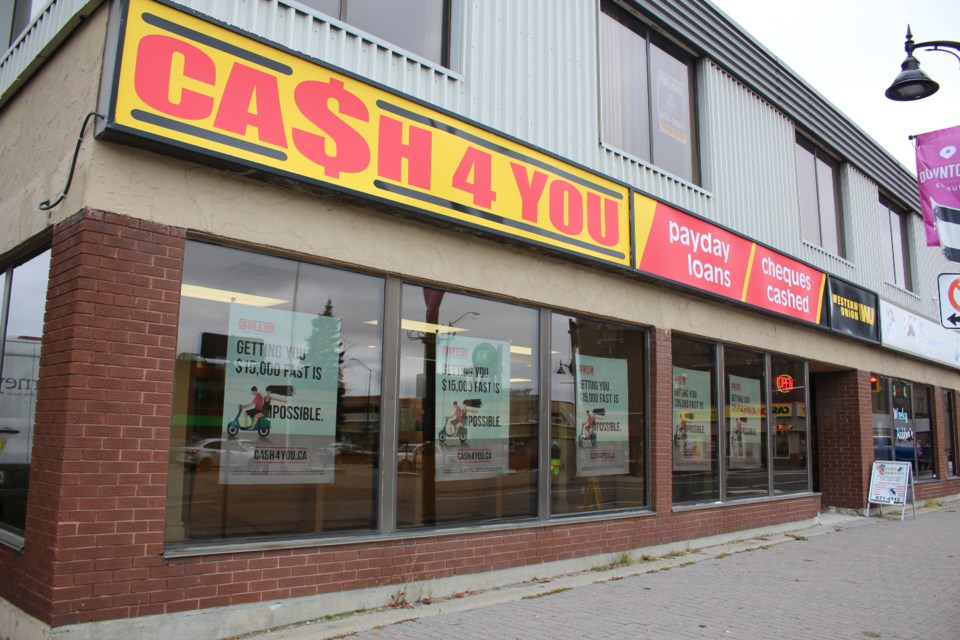 One of several payday loan establishments in downtown Sudbury. (File)

City council takes a lot of criticism, and rightly so, but when it comes to Ward 4 Coun. Geoff McCausland’s member’s motion directing staff to find ways of reining in payday lenders in the city, they made the right move.

If you’re unfamiliar with what exactly a payday lender is, here’s a brief description, as provided by the Ontario government. Operating from storefronts, payday lenders offer small-value loans for short periods of time, usually between paydays. The loans are unsecured and the borrower can’t put down collateral or otherwise guarantee the loan.

Most payday lenders don’t do credit checks, instead asking the borrower to prove continuous employment, provide proof of address and have a chequing account.

As McCausland pointed out in his successful pitch to council (council backed the motion with only Ward 3 Coun. Gerry Montpellier voting against), the interest rate these outfits charge is far (far, far, far) higher than you find at a bank or get from a credit card company — like 390 per cent (no, not a typo) annualized.

Critics of these businesses point out that they are often located in lower-income neighbourhoods, which is not surprising, since that’s where most of their customers are. Figures from 2016 collected by Statistics Canada and highlighted by the Toronto Star back in April showed, again not surprisingly, payday loans are most often used by people who are already “economically vulnerable,” because they’re the ones who most often need the money and they are often the same people who have been denied credit cards or lines of credit.

To get around legislation that limits a borrower from taking out a payday loan amounting to more than 50 per cent of their net pay, desperate people will take out payday loans at more than one lender, something the legislation doesn’t prevent.

Not only can financially vulnerable people get locked into a vicious cycle, but payday lenders are increasingly becoming a place of last resort for people struggling to stay solvent. Rather than providing the assistance a person needs, though, the payday loans provide a new hole for borrowers to fall into.

A 2019 review of Ontario personal insolvencies by insolvency trustees Hoyes, Michalos & Associates found the percentage of insolvent debtors who took out payday loans rose from 12 per cent in 2011 to 39 per cent in 2019. J. Douglas Hoyes, one of the principles in the firm, argues in a separate post that those insolvencies were actually caused by easy access to payday loans, which pushed people so far into debt there was no way to dig themselves out.

These places bill themselves as offering a hand up when people need them, but the data strongly suggests rather than a hand up, payday lenders are actually pushing people down.

Greater Sudbury’s move to rein these predatory lenders in isn’t without precedent. Toronto banned issuing new business licences for payday lenders in 2019. A Toronto Star story points out the city has as many payday lenders as it has Tim Hortons. Let that sink in.

Quebec has taken a particularly hard stance, capping interest rates at 35 per cent, effectively making it unprofitable for most of these places to operate.

I’m curious to see what recommendations staff come back with to protect Sudburians from the predatory practices of these joints. We’ll be keeping an eye on that story.

And finally, a quick note on the Le Ledo project. The pitch for this $40-million project that boasts it will transform the downtown came out of the blue early in October.

Under the proposal, the existing Ledo Hotel would be repurposed and integrated into a three-storey brick and glass building with the addition of a 14-storey tower above, clad in copper and glass, and boasting 150,000 square feet of commercial space.

Here’s the thing, the project has a spokesperson, Chris Tammi, a local real estate broker. How he is connected to the proposal is unknown, because he wouldn’t say when we asked him. Whoever else is involved in the idea is a mystery, because they don’t have the courage of their convictions to put their names to it.

From statements made in the initial press release and subsequent interviews with Tammi, the Le Ledo group is opposed to the Kingsway Entertainment District and for renovating Sudbury Arena.

I have no issue with their idea; I do have an issue with their secrecy. Say what you will about Dario Zulich and his KED idea, for good or ill, at least he is willing to suffer the slings and arrows of criticism by putting his name out there.

If the mystery team behind Le Ledo is actually serious (and this whole thing isn’t some kind of stunt or red herring, which is entirely possible), put your money where your mouth is and stand up to be counted.

Otherwise, Le Ledo is a nothingburger and just not worth talking about.

Mark Gentili is the community editor of Sudbury.com.

Gentili: The terrible art of mourning in a time of pandemic
Aug 27, 2020 6:00 PM
Comments
We welcome your feedback and encourage you to share your thoughts. We ask that you be respectful of others and their points of view, refrain from personal attacks and stay on topic. To learn about our commenting policies and how we moderate, please read our Community Guidelines.