Gentili: Thank you, Lily Fielding, from all of us

The generosity of the Fielding family matriarch leaves an incredible legacy in our community
0
Sep 11, 2019 12:00 PM By: Mark Gentili 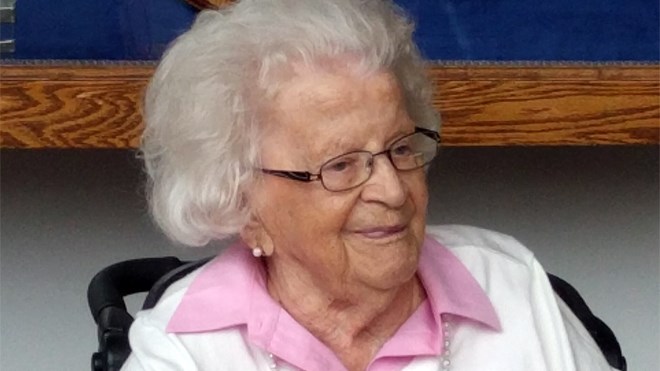 Cut: Greater Sudbury said goodbye this week to one of the city’s best-known and best-loved philanthropists, Lily Fielding. She passed away Sept. 8 at age 103. (Supplied)

The many tributes to Lily Fielding that poured in from numerous community leaders speak to a singular generosity and passionate community-mindedness. Few cities have the benefit of counting a Lily Fielding among their residents.

The Nickel City was incredibly lucky to have her.

Certainly the city’s best-known (and best-loved) philanthropist in recent decades, Fielding passed away Sept. 8. She was an impressive 103 years old.

Mayor Brian Bigger highlighted her efforts to make the Nickel City a better place to live. Health Sciences North CEO Dominic Giroux called her an “inspiration” and noted the exceptional legacy she leaves behind.

Ward 9 Coun. Deb McIntosh pointed out that most Sudburians will have never met Lily Fielding, but almost all of us have been touched, in some way, by her philanthropy.

McIntosh added something else to the discussion when it comes to describing the type of person Fielding was: humble. At a 2016 gathering to celebrate her 100th birthday, the grand dame of generosity described herself as “just a farm girl.”

“You may have considered yourself ‘just a farm girl,' but I will remember you as a woman who never forgot that she was a farm girl and that the entire community, like a farm, is a place to be tended and nurtured,” McIntosh wrote.

I think the city councillor is onto to something.

Lily and Clifford, her husband of 68 years who passed away in 2004 at age 89, were lifelong Northerners. They were born in the North, raised in the North, built their businesses in the North and kept their wealth in the North.

We Northerners often lament that our best and brightest grow up and leave, taking their talents with them. Not the Fieldings. The couple built a string of successful businesses in mining and construction (and even ski manufacturing for a time).

They made a lot of money. The Fieldings might have been content to sit on that cash, but in 2002 the couple created the Clifford and Lily Fielding Charitable Foundation to address issues of poverty, encourage and advance educational causes, support religious institutions and just generally support the community.

Sure, there are the big-ticket donations to Laurentian University and the Northern Cancer Foundation, both of which have received huge support from the foundation. But were are also smaller donations that don’t get headlines -- donations that support initiatives like Whinnying In Life, which provides therapeutic riding services, or Warmhearts palliative care services.

In 2016, the year Lily Fielding turned 100, she wanted to celebrate in style. Not with a fancy party or a big purchase — true to form, she didn’t celebrate herself — but with a blizzard of giving. Besides donating the 300 acres of South End land to form Kivi Park, she gave $1 million to help build it (adding another $2 million on top of that the next year).

On the day of her birthday, Aug. 19, she supported Greater Sudbury Police Service’s Chief’s Youth Initiative Fund, and Greater Sudbury Fire Service and EMS, which used her donation to support the NEO Kids Foundation.

Despite the hundreds of groups and causes that the Fielding Foundation has supported, Kivi Park (named for her parents Susanna and John Kivi) is her legacy. Besides being the largest park in the entire city, it is also one of the most popular.

Northern Life / Sudbury.com highlighted the impact Lily Fielding and the Fielding family have made on the community in 2017 when our awards judges chose them to receive the 2017 Hall of Fame award at the annual Community Builder Awards.

Every community in Canada would be lucky to have their own Lily Fielding, a humble person with a passion to use the resources they’ve been fortunate enough (and smart enough) to accrue to benefit the community, to support important causes and issues to a degree that goes beyond mere simple generosity.

Lily Fielding may have left us, but her legacy is forever. Thank you, Mrs. Fielding, from all of us.

Gentili: A tragic start to a new year
Jan 8, 2020 1:00 PM
Comments
We welcome your feedback and encourage you to share your thoughts on this story. We ask that you be respectful of others and their points of view, refrain from personal attacks and stay on topic. To learn about our commenting policies and how we moderate, please read our Community Guidelines.