McCormick: Join us May 26 in helping to defeat depression 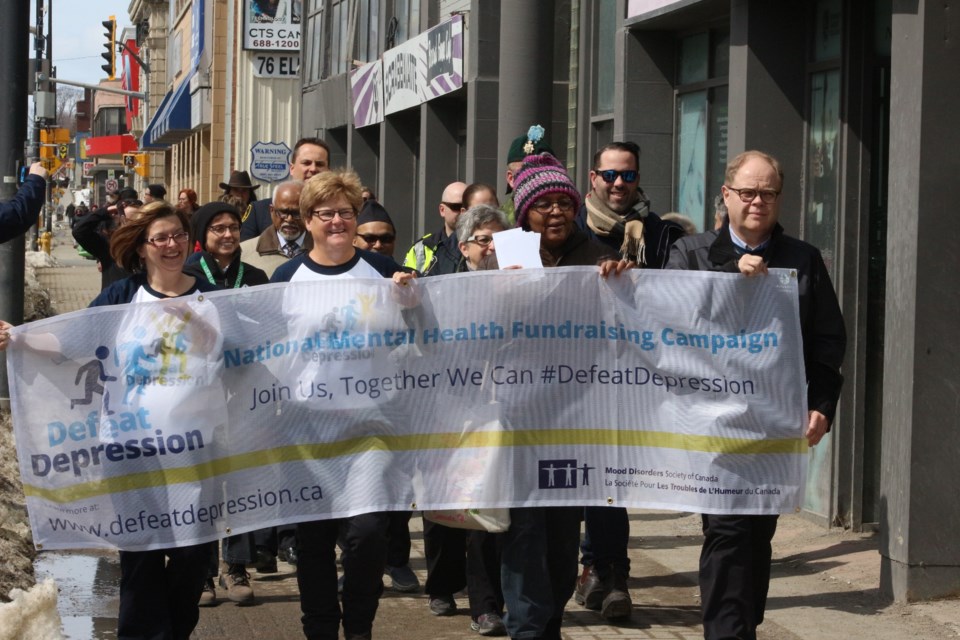 Kevin McCormick, right, led a team of community leaders in a march down Elm Street to promote registrations for the upcoming Defeat Depression Walk/Run being held on May 26. (File)

About a month ago, I had the privilege of leading a team of community leaders in a march down Elm Street to promote registrations for the upcoming Defeat Depression Walk/Run being held on May 26.

At first glance, it may simply appear a strategic way to get some key marketing and promotion in advance of the event, but for me it was much more than that.

The honorary team, which I participated in as the honorary chair of the local Walk/Run, was representative of a community collaboration; one that aims to engage a greater number of voices in the ongoing conversation and mission to end the stigma surrounding mental illness.

Our honorary team members included representatives from various local organizations which lead mental health programs and services in our community, work closely with Northern Initiative for Social Action (the recipient of this fundraiser), and/or are symbolic of some of the sectors of our population that are at a higher risk of mental health and mood disorders.

Among our participants that day were two Huntington University students. As the president and vice-chancellor of Huntington University, I am keenly aware of the immense pressure that students face as they navigate their studies, part-time jobs and extracurricular activities, which often includes constant comparison to peers online.

Youth between 15-24 years of age are the group most likely to be affected by mental illness, with 70 per cent of mental health issues arising during childhood and adolescence.

I was also proud to have Dr. Lorraine Mercer, the chair of our university’s Gerontology department involved. Older adults are among the fastest-growing age group in Canada. As we age, our health, mobility and level of independence can drastically change; all factors that put seniors at risk of isolation and depression.

And, let’s not forget about the loved ones turned caregivers. It’s not an easy job, to say the least.

We also welcomed first responders and military personnel. Recent studies suggest workers in these professions are at a greater risk than the general population of developing a mental health disorder. High rates of suicide linked to PTSD suggest there is an urgency, and that we must work diligently to address the ongoing culture of shame associated with issues of mental health.

Marginalized and vulnerable populations also face higher risks for some mental health disorders. There are many professionals in our community, including those at Health Sciences North, NISA and Réseau ACCESS Network, who work daily to support these individuals. As such, I’m happy many of them came out to support our launch event, as well.

As you can see, illnesses of the mind do not discriminate — anyone of any age can be affected. As a community we need to come together. With more voices, we can unite in greater numbers to end the stigma surrounding mental illness. I hope you will join us on May 26 for the 5th Annual Defeat Depression Walk/Run and lend your voice to this important cause.

Dr. Kevin McCormick is the president and vice-chancellor of Huntington University, as well as the honorary chair of the 2018 Sudbury Defeat Depression Walk/Run.