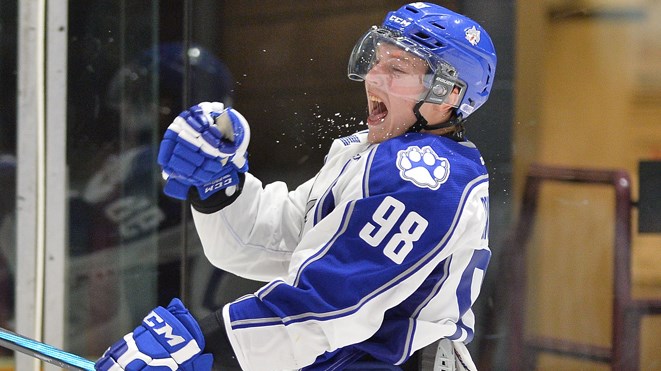 Sudbury Wolves reporter Nick Liard pontificates the benefits of a trade that would see Dmitry Sokolov end his tenure in the Nickel City. (File)

There are no rumours of a deal, and Dmitry Sokolov has not asked for a trade as far as we know but there are a couple of reasons why the Wolves should make the move either now or at the OHL trade deadline.

Almost half the season is in the books and the Wolves find themselves on the outside of the playoffs looking in.

In their defense, injuries have really hurt them and they’ve never been at full strength, but that is no reason to hang on to one of the most dynamic scorers in the OHL.

If the Wolves were in the top half of the Eastern Conference then sure, it might be worth holding on to him, but at this point the only reason you would hold on to him is if you think you can make a long playoff run, which looks unlikely at this point.

Another reason to hang on to Sokolov would be to have him finish his OHL career in the blue and white.

Sokolov has 155 points in 159 games for the Wolves including 31 points this season which is almost certain to be his last in the OHL.

The Minnesota Wild draft pick has shown that he is capable playing with high-calibre talent that will be in the AHL next season while playing in the Canada/Russia Super Series and if he is named to team Russia’s roster in the World Juniors that will only further his development.

The Wild will want him in the AHL next season.

Looking at the roster he will get by far the most return out of any player outside of Micheal Pezzetta who they will likely keep after naming him captain, and David Levin who has been injured.

Sudbury risks keeping him for the sake of the fans and getting nothing in return where they could trade him and get a nice package that sets the team up for success in the next year or two.

Would it be a shock to the fans? Sure.

Would it suck to see him go? Sure, but that is the business of hockey and sometimes tough decisions need to be made.

But the Wolves faithful could surely understand a smart hockey trade if one is offered.

Sokolov has been one of the most electrifying to ever put on a Wolves uniform. Not only that, but he is a humble kid who is a great teammate in the locker room.

Three years in the league, one playoff appearance and perhaps on a roster that won’t make the playoffs this year, it might be nice to see Sokolov get a crack at a deep playoff run,  and perhaps get a chance at a Memorial Cup.

A trade would facilitate that, you help him out and help yourself at the same time.

What the Wolves will do with the current roster will become a bigger question as the trade deadline looms, but they should trade Dmitry Sokolov.