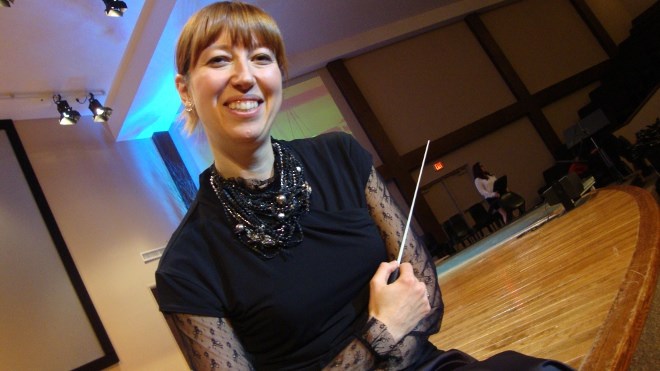 The first of three candidates for conductor of the SSO, Mélanie Léonard delivered a stellar performance this past Saturday at Glad Tidings. Photo by Hugh Kruzel.
Selecting a conductor can’t be easy. How do you know if they are the right fit? Do they have the right stuff?

The Sudbury Symphony is searching for a new Maestro, and Saturday the first of three candidates had an opportunity to demonstrate her capabilities.

It is the best kind of job interview — patrons got to hear her rev the engine and make some volume. Something a little new, something a little old, a bit of fun, and guest conductor Mélanie Léonard had the audience singing her praises.

Who wouldn’t smile at the amusing introductions and melodies Léonard chose to showcase her skills. The repertoire selected gave insight into her intellect; a real crowd-pleaser of a program followed. “It was brilliant,” said first-time patron Matthew Wylliamson.

Canadian composer John Estachio’s 1998 “Frenergy” was the first piece of the evening. An amalgam of the words frenetic and energy, “it begins with a thunderous introduction by the percussion who establish the infectious 6/8 pulse,” said Estachio. It sure caught the audience’s attention.

Throughout the five minutes of wild ride, the Maestra brought a take-charge attitude and broad sweeping gestures encouraged the orchestra to maximum output. The electric green monochrome of the projections seemed a natural fit with the mood and animation. Left hand lifted, directing, pulling or calming, her baton punctuated the air skillfully, calling each section to aspire to specific peaks. Hers were almost ballet-like gestures as the last note was caressed or captured with a single grand movement. “She made watching music interesting,” said Laura Lee Ripa from her near front row seat.

At half-time Maureen DeStefano remarked how the rendering of Elgar’s Enigma moved her to tears with its soulfulness. Another concert goer called the lush sounds “ear-candy.” Mendelssohn, Wagner, Brahms were familiar and harmonious. Rossini’s “Barber of Seville” of course has its own charm, imagery, and appeal.

Wrapped in well-known classical and more modern scores, Léonard also celebrated the 40th anniversary of the SSO. Playful injections, variations and morphing of the “Happy Birthday” theme even had a whole auditorium chorus.

“I especially enjoyed the selection where each section was showcased; first you heard only cellos, then woodwinds, and so on. The music and the conductor were simply fabulous,” said Hermina Hubert after the performance.

At the end of the show, many came forward to participate in the Q&A to hear more from this appealing artist. Léonard was quick to point out that though this was her debut to Sudbury, it was the whole orchestra who delivered the concert.

“Thank you for your support of live music!” she said with elegance, and effortlessly engaged the audience in both languages. Léonard expressed an obvious pride in the results of rehearsals, practice and performance.

“The director's choice of music was so appropriate,” said Barbara Smatlanek. “She was able to connect it to the Sudbury region, making us feel part of it. This was the best experience I have had attending the symphony.”

“Memorable Masterworks” takes place March 5. Under guest conductor Gordon Gerrard compositions by Morlock and Tchaikovsky are the carte du jour. Clarinetist Todd Cope will be featured in Mozart’s Concerto in A major.

The second of the three finalists at the podium will be Martin MacDonald on April 16, delivering a “Folk and Fire” inspired theme of Canadian and international scope.

Hugh Kruzel is writing a series of columns for NorthernLife.ca about Sudbury Symphony Orchestra's search for a new music director.