Trudeau on Trudeau: Grit leader in his own words

Justin Trudeau brought his star power to Gloria's Restaurant in Sudbury on Friday, chatting with diners excited to see Canada's most popular politician, a man whose personal fame dates back long before he was elected to the House of Commons in 2008.
Dec 13, 2013 9:50 PM By: Darren MacDonald 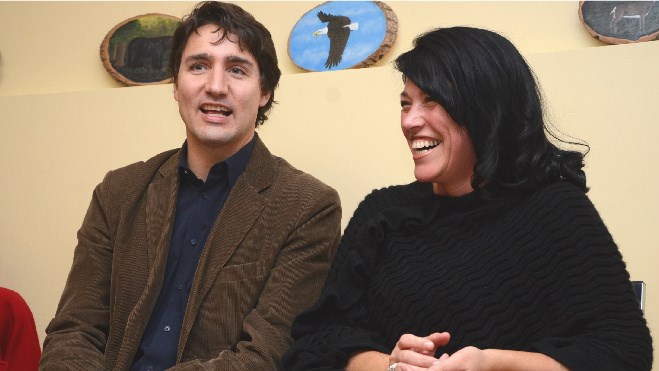 Liberal Leader Justin Trudeau and Angela Recollet, executive director of the Shkagamik-Kwe Health Centre, speak at a news conference at the centre on Thursday. Arron Pickard photo.
Justin Trudeau brought his star power to Gloria's Restaurant in Sudbury on Friday, chatting with diners excited to see Canada's most popular politician, a man whose personal fame dates back long before he was elected to the House of Commons in 2008.

The son of former Prime Minister Pierre Trudeau — himself the son of a millionaire — Trudeau the younger seemed at home Friday, pressing the flesh with the regular folk, switching between French and English as he went table to table.

He's still a new MP, but demonstrates political skills you would expect from someone who grew up in the fishbowl at 24 Sussex Drive, the home of every prime minister since Louis St. Laurent in 1950. Despite a modest resume — he was an elementary school teacher before entering politics — Trudeau has vaulted the Liberals into top spot in the polls. His personal popularity led to a strong showing in four recent byelections, in which they won two and came razor close to upsetting the Progressive Conservatives in the Manitoba riding of Brandon-Souris. He's also managed to avoid the effects of Progressive Conservative attack ads that devastated his predecessors, Stephane Dion and Michael Ignatieff.

But Trudeau's critics point out that, with his lack of a track record in politics, he's more of a star than a leader, a lightweight with a pretty face. Unlike his father, he's not known for his towering intellect and hasn't proven to be a particularly effective performer in the House. Even with the recent Senate scandal, he hasn't supplied the withering TV sound bites traditionally expected of party leaders.

In fact, he has the worst attendance record of a leader in recent memory in the Commons, something he attributes to his spending time travelling the country, trying to rebuild the party, riding by riding. He took time to answer a few questions at the end of his visit to Gloria's.

On the hostility that some — mainly men — have toward him, people who say he has become so popular on the back of his good looks and famous name:
“I've had people approach me that way all my life. If you look at the expectations around me winning my first nomination battle, people said I wasn't going to be able to do it. I outworked everyone else and I won it. People said there's no way I was going to win that riding (Papineau), in a contested situation, against a Bloc Quebecois star, and I outworked them and I won it.

“Every step of the way, people said it's just about his name and his fame, and I proved it was about the hard work, about building up memberships, about reaching out to Canadians. So I don't worry too much about what people think about me going into it. What I worry about – if worry is the right word – is that everyone gets a chance to know me through this process. Because I'm confident, regardless of someone's preconceptions, once they get to know me a little bit better, they'll realize that serving this country the way it deserves to be served is what I'm all about.”

On rebuilding the federal Liberal Party, which has gotten smaller each election since the billion-dollar sponsorship scandal that emerged at the end of the term of former Prime Minister Jean Chretien:
“There is a sense that the Liberal Party knows how to wield power and has done good things in the past. But what people don't want right now isn't a party that says 'Remember how great we were? Vote for us now.' They want a party that's focused on earning their trust now, that recognizes politics is different now.

“It has to be done through a lot more grassroots, a lot more engagement, not a top-down approach that has caused us problems in the past.”

On his more casual, open approach to politics, that stands in stark contrast to the disciplined and controlled message that has been the hallmark of Prime Minister Stephen Harper's government:
“I think what people want is someone who's real, but someone who is open and honest in his values. Unfortunately, we've seen on different occasions where authenticity doesn't necessarily lead to good things – I'm thinking of the municipal scene in Toronto right now. Being someone who is serious about his dedication to his country, to connecting with people, to be inspired and to focus on serving the communities that he's supposed to represent, is something that people are hoping for from their representatives, and don't feel they've gotten in a long time.”

On the role market research plays in shaping modern politics, where parties adopt certain policies in hopes of attracting support from a specific segment of society:
“I understand that question, but ultimately it's not even one I struggle to try and answer strategically. I just understood what Canada needs is a political party and politicians and leaders that bring people together, that, instead of looking for the wedge issue, or the attack angle, instead, says, 'OK, these are our problems, how are we going to solve them together in a responsible and open way?'

“Ultimately, it's a self-regulating system. If ... being open and honest and reasonable and trying to solve our problems the right way, rather than the popular way, if that doesn't work, then I'm not the right person to lead this country. Then my approach of being focused on drawing out the very best in people is no longer what this country is.

“But, honestly, I've been across this country, coast to coast to coast, and I've seen, repeatedly, how optimistic, big-hearted, hopeful and hardworking Canadians are in wanting to get a better option, and wanting to build solutions for the future. I believe that's why the Liberal Party is starting to reconnect with people in every riding in this country.”

On how he balances family and political live, having grown up himself in Canada's most famous political family:
“The big one was moving to Ottawa from Montreal once I won the leadership, realizing that I needed a home base close to Parliament so I can spend as much time as I can with my kids as possible in the evenings, taking them to school. I'm here in Sudbury, and we've had two, very big, intensive days, but I kissed my kids (before) school yesterday morning, and I'll be having dinner with them tonight. So, it's one night away.”

“It means a lot of crammed schedules while I'm away, but it also means that balance – this weekend, I'm with my family and next week I'm in B.C. for a tour.”

“A lot of families have to work hard, they're away from their kids sometimes. So it's the quality of the time you have. I'm not in politics in spite of my family, I'm in politics because of my family. Because I believe I have the responsibility to build a better world for them.”