Column: The state shouldn’t be making fashion choices for its citizens

Separation of church and state and the battle over the burkini
Nov 22, 2016 3:00 PM By: Community Submission 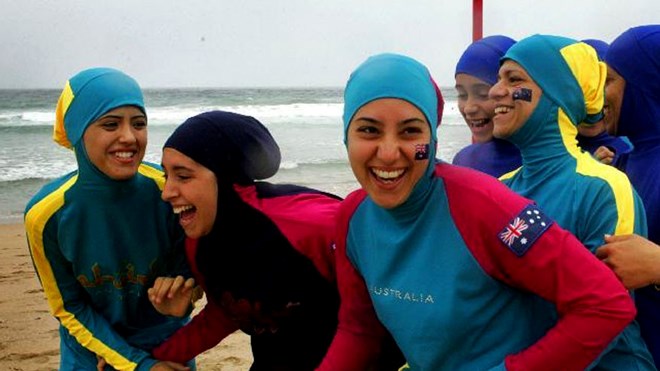 The burkini was designed in 2004 by Australian designer Aheda Zanetti, who was inspired after seeing her niece struggling to play sports wearing a hidjab. Photo: Zanetti

Last summer, some beaches in France were the stages for an odd spectacle after the ban of the burkini swimwear, a type of bathing suit favored by some Muslim women.

Municipal edicts, since then revoked by the courts, did imply for a short while that the police would now have to undress Muslim women in the name of secularism. While some of us might want to brush aside this episode as a French eccentricity, the truth is that every society is struggling over how to manage religious symbols, and especially those we are less familiar with, such as the burkini or the hidjab (Muslim headscarf).

This subject is very complex and involves quite a few emotions and fears. However, there are also some conceptual confusions that can be remedied rather easily; first amongst which is the confusion over what it means for something to be public and what it means for it to be private.

After centuries of struggles, the Separation of Church and State has widely been established in the Western World in order to prevent religion from dictating public affairs, but also to prevent the state from interfering in a citizen’s free exercise of his or her religion. This separation is important, but it is often misunderstood because of the two possible meanings of the pair “public-private.”

With this view, it makes sense to try to remove all religious symbols and manifestations of faith from parks, workplaces, streets and all sorts of public spaces, in the name of the secularization of the public (space). This is why many, in France and around the world, have argued in favour of bans on visible religious symbols and clothing, from the hidjab to the burkini.

But this is not the correct meaning of “public,” which has to do with how it affects the whole political community or not. Something is public (as in “a public affair”) when it is an issue concerning the state, the law and common institutions. It is private (affair) when it concerns only the individuals involved.

In that sense, many acts happening in public (spaces) are in fact private (affairs). For example, how one chooses to dress, or whether one is sitting down in a park to pray or simply sitting down to rest.

Despite happening in plain sight, most of our actions are not, in fact, public. And in the same way, many acts that are public (affairs) are happening in private (spaces), as in the case of conjugal violence, which is a crime, despite it happening in one’s private home.

As we see, the state should not police everything that happen in public spaces, nor do nothing whenever something is happening in a private space. What the separation of church and state tells us is that we should make sure that the quality of the laws, politics, and services is not overly influenced by religion. It does not imply that we should prevent any religious expressions from happening in plain view of others.

How a public official handles his or her job is a public matter, and discriminatory practices must be fought. But, while doing a fine job as a public servant, what is not public are the clothes that one wears.

And of course, this is even truer for ordinary citizens, who are simply leading their private lives in and out of the public space. Bans on some prudish swimwear at the beach, on religious processions on the street or on the wearing of religious symbols by otherwise dutiful employees are all misguided results of 0a confusion between public space and public affair.

The state should still fight oppression, discrimination, exclusion and intolerance, but we should not fight all visible expression of faith, identity and culture. Or else, the state itself risks becoming the oppressor, just as it was, for a few sunny days, on some French beaches.