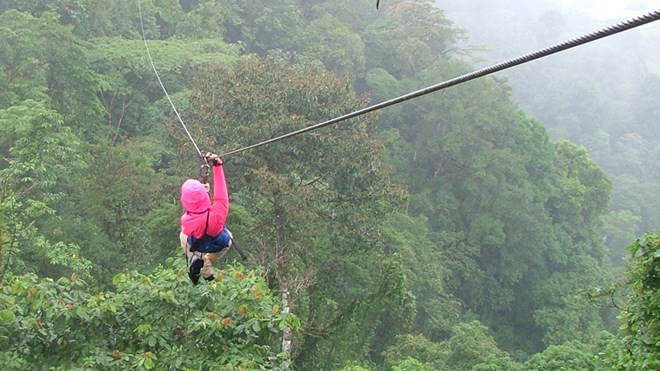 My first year of retirement honeymoon is over and I am no longer a Retirement Bride. Rats. That means reality must set in and reality can sometimes suck.

What did I do on my first anniversary to mark the day? I decided on something I have never done before, zip lining.

By the way, I did not zip line through the snowbanks in February. We have just returned from a lovely holiday in Florida with Myrtle Beach golf tagged on at the end. Notice I say “holiday,” because I simply cannot be a serious snow bird who can make a real life for months in Florida. That may come, but not now.

Zip lining is daring and scary. But I was up for the challenge for my retirement anniversary. I was ready to grab a helmet, to be snapped into a harness by a 6-4 wilderness ranger hunk, to be hooked to a line as my stomach churned and to scream bloody murder as I skimmed the tree tops.

Over we went to Shell Factory, North Fort Myers, where they advertised zip lining. I would not back down, no matter what. We retirees have already lived most of our lives, so what did I have to lose?

How can I describe what happened? Let me just say I have been on ski hill chair lifts that were scarier. No helmet. No straps. A double midway-style seat, no less, and a teenage attendant who teased me about whether I could swim since our gentle two-minute ride was over a pond.

My first retirement anniversary was celebrated on an unforgettably lame ride. I have the picture to prove it. Next year, maybe skydiving.

As you may know, I have had such an awesome first year with travel and projects that kept me flying without needing a zip line. I wouldn't change a thing.

One of my discoveries is that my health team is getting larger. Let me ask you: Have you ever heard of a cervical chiropractor? I kid you not. Stop going there and let me explain.

I'm keen about fitness and health and did not miss the opportunity to go to a large health fair in North Fort Myers. I knew I would learn something. That's where I met Dr. Rick, the Cervical Chiropractor.

I'm like most of you. I had no idea such a targeted person existed, far less have a business card to prove it. Dr. Rick smooth-talked me with a deal I couldn't refuse. A $250 package for $50 if I signed up that minute. I hesitated ... one second … two seconds ... three seconds ... I'm in.

Dr. Rick and I would meet the following week in a legitimate-sounding place.

I have now discovered that your cervical area for a chiropractor is your neck and not what you were thinking. Dr. Rick is a neck specialist. I booked eight appointments before we left Florida, and now that I can turn my neck fluidly enough to see the golf hole when I am putting, I have discovered it's not my neck — I'm just a bad putter.

So much for my nearly $400 miracle investment.

I am back home with the 2016 calendar spread out before me and wondering what new things to plug in. I'll continue with many of the tried and true, but I long for new challenges. I long to find things I like that will make a difference. I seem to crave a balance of pressure, stress and deadlines to feel fulfilled. Making a difference is essential in my books.

One night at dinner, my friend, Elle, took me to task, telling me that I was not to write that all retirements are happy. She has been retired for two years and every day misses being surrounded by people and feeling the satisfaction of a job well done.

Her stimulation has dwindled and she's lonely. I get it and I feel for her. It's a fear for many on the brink of retirement, feeling sidelined and useless. Starting a new life has challenges.

Once the snow is gone, I will search for a true zip line where I can paralyze the squirrels with my panicked shrieks. Year two, here I come. Confession? I'm a bit nervous now that the honeymoon is over and reality is breathing down my neck.

PS: Just came home from my first day back at the Y. Retirement year two is looking lazier so far, but something new tapped me on the shoulder this afternoon. I'll tell you about it later.

Judi Straughan is the former education co-ordinator at Sudbury Theatre Centre. In this series, she explores the challenge of being newly retired.

Retirement: One size fits all? Yeah, I don’t think so
Dec 21, 2015 4:12 PM
Comments
We welcome your feedback and encourage you to share your thoughts on this story. We ask that you be respectful of others and their points of view, refrain from personal attacks and stay on topic. To learn about our commenting policies and how we moderate, please read our Community Guidelines.