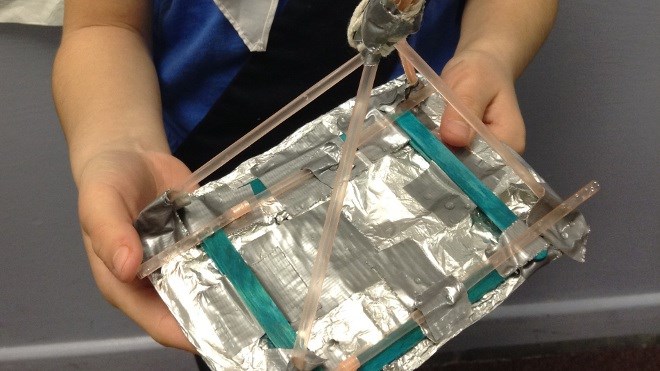 One of the popsicle stick and tinfoil boats about to be loaded with marbles as part of the 2nd Lockerby Girl Guides Engineering Month competition. Photo by Elizabeth Knowles,
March 10 found the 2nd Lockerby Girl Guides crowded around a plastic basin, counting loudly in unison. They were competing to see how many marbles the boats they had made out of straws, tape, popsicle sticks and tinfoil would hold, and each team was convinced they were going to win.

Sometimes people associate Girl Guides with kids camping, sing-a-longs and crafts, but the program has moved far beyond that.

That night in March, the girls were celebrating National Engineering Month: a Canada-wide celebration that aims to open young people’s minds to the potential of engineering-related careers.

And they do it in an interesting way, allowing the kids to see where their interests might fit into the wide variety of disciplines in the field.

When asked what they thought engineers did, some of the girls replied that they either made things or fixed things. Others answered that they designed structures like buildings. During their two-hour meeting, the girls got to experiment with being engineers themselves.

Besides making the boats, they explored aerospace engineering while making hovercrafts out of paper plates and balloons, and tried their hands at food engineering by mixing baking soda and regular lemonade to create a fizzy variety.

It was impressive to see them making connections between the science they were using and experiments they had done previously. Many of the girls recognized the lemonade reaction as similar to what happens in vinegar and baking soda volcanoes. Although the baking soda made it bitter, the girls got the explosion they were looking for.

Carly Robillard, a new leader with the unit, said she loved seeing the girls’ ingenuity and confidence in their own ideas. They jumped right into building and problem-solved effectively in teams.

Women account for only 23 per cent of engineering graduates aged 25-34 in Canada, so it is especially important for girls to see it's not just a field for men.

Girl Guide-aged girls (9-12) are incredibly creative and innovative. No two boats looked the same and one of them even held more marbles than the one the leaders with science backgrounds built.

When asked how they had enjoyed the meeting, the girls were proud to say they had learned something new. One girl exclaimed, “My favourite part was making the lemonade…but ewwwwww!”

Elizabeth Knowles is a student in the Laurentian University – Science North graduate program in Science Communication. She and Carly Robillard are volunteers with Girl Guides Canada.