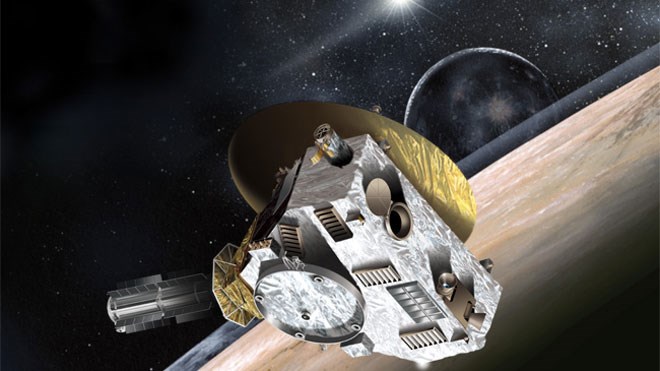 Artist's concept of the New Horizons spacecraft during its planned encounter with Pluto and its moon, Charon. The craft's miniature cameras, radio science experiment, ultraviolet and infrared spectrometers and space plasma experiments would characterize the global geology and geomorphology of Pluto and Charon, map their surface compositions and temperatures, and examine Pluto's atmosphere in detail. The spacecraft's most prominent design feature is a nearly 7-foot (2.1-meter) dish antenna, through which it would communicate with Earth from as far as 4.7 billion miles (7.5 billion kilometers) away. Encounter 01 lg" by Johns Hopkins University Applied Physics Laboratory/Southwest Research Institute.
It was a warm winter day on Florida’s east coast in January of 2006.

As citizens in Cape Canaveral were finishing up a late lunch, the NASA team at the Kennedy Space Centre was starting the countdown for an unprecedented mission to the edge of our solar system — a journey of more than five billion kilometres to Pluto.

The New Horizons mission was developed to learn more about Pluto by sending a piano-sized spacecraft to 14,000 kilometres above its surface to take photographs, measure temperatures and gather information about its geology and surface composition. It's due to reach Pluto this summer.

All that will be done by instruments able to detect chemical elements and make measurement from far above Pluto’s surface.

“[NASA’s] first mission to distant Pluto will also be humankind’s first close-up view of this cold, unexplored world in our solar system,” said Jim Green, in a news release. Green is the director of Planetary Science at NASA headquarters in Washington.

Until now, we have had surprisingly little information about Pluto. It wasn’t discovered until 1930 and its diameter is only the distance between Sudbury and Miami. That isn’t enough for good pictures from five billion kilometres away, so our only images have come from the imagination of artists.

Why is Pluto so important? Although it was demoted from planet to a so-called dwarf planet in 2006 because of its small size, its importance has not faltered.

As far as we know, Pluto is the largest one of more than 70,000 icy objects orbiting in a region past Neptune called the Kuiper Belt. We believe that many of the objects in the Kuiper Belt collided with the planets as they formed early in the history of our Solar System. They contributed to Earth’s oceans, our first atmosphere and perhaps even to the molecules that eventually became life.

Studying the composition of Pluto will help us understand more about how the world we live in was formed.

The New Horizons spacecraft is closing in on its destination after nine years of travelling through space. It has recently taken photographs of two of Pluto’s five tiny moons, Nix and Hydra.

"It's thrilling to watch the details of the Pluto system emerge as we close the distance to the spacecraft's July 14 encounter," New Horizons science team member John Spencer, of the Southwest Research Institute in Boulder, Colorado, said in a NASA release. "This first good view of Nix and Hydra marks another major milestone, and a perfect way to celebrate the anniversary of Pluto's discovery."

Those of us who grew up memorizing planet mnemonics like “My Very Excellent Mother Just Served Us Nine Pizzas” will soon see photographs of the Pizza!

Jenny Kliever is a student in the Laurentian University – Science North graduate program in Science Communication. She is a Dean’s Honours list Physics graduate from the University of Guelph.