Looking at lung cancer: Could marijuana be a culprit?

Marijuana might soon be available for legal purchase in Canada. Some patients have already been smoking it to treat a range of medical ailments – with doctor approval. But not everyone agrees that marijuana should be considered medicinal.
Feb 1, 2016 2:07 PM By: Talking Science 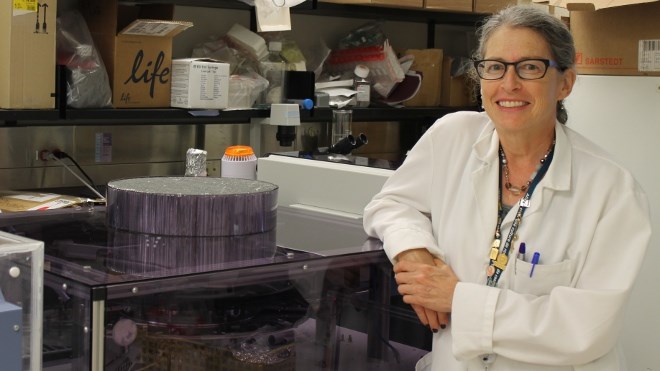 Dr. Leslie Sutherland, a researcher at Advanced Medical Research Institute of Canada, is studying the effects of marijuana smoke on human lungs. File photo
Marijuana might soon be available for legal purchase in Canada. Some patients have already been smoking it to treat a range of medical ailments – with doctor approval. But not everyone agrees that marijuana should be considered medicinal.

At the Advanced Medical Research Institute of Canada here in Sudbury, Dr. Leslie Sutherland is studying the effects of marijuana smoke on human lung cells.

Lung cancer is the leading cause of death from cancer among Canadians. It can take 20 to 30 years for the full effects to be felt and, as a result, is especially prevalent in older people.

Could marijuana emerge as a cause of lung cancer, too?

Sutherland’s lab is special. It’s the only one in Canada outside of an industrial lab to have a special cigarette-smoking machine. Lung cells are placed in the machine and smoke from marijuana cigarettes is filtered over them in the strength and amount desired.

So how does a scientist come by human lung cells? By growing them, of course, from a small sample purchased from a supplier. She is then able to cultivate what she needs in the lab. Sutherland prefers this setup because it allows her to look at marijuana smoke as a whole, and how it interacts with human lungs.

Her interest in everything that’s in marijuana smoke has to do with the so-called Entourage Effect — which, despite what the name suggests, has nothing to do with the HBO hit.

The Entourage Effect suggests the more than 480 compounds found in marijuana act differently when they are together, than when they are on their own. Looking at the smoke allows Sutherland to capture the full picture of how the constituents in the smoke interact with one another – including the particulate matter that comes from combustion.

“It’s about informing people what they are putting into their bodies,” Sutherland said.

Sutherland is one of few researchers who look at the smoke as a whole, rather than studying individual cannabinoids found within the plant. Cannabinoids are the active components in marijuana that provide its characteristic effect: THC (tetrahydrocannabinol) or CBD (cannabinol). More than 100 of these have been identified in the plant.

While Sutherland said it is still too soon to tell if marijuana smoke can cause lung cancer, she argues it is critical that we find out – both for patients and for doctors.

“Let us get rid of the fear, and do more evidence-based research,” she said. “It’s about making sure we are doing the right thing.”

Jordan Nicksy graduated from Environmental Studies at the University of Guelph and is now a graduate student in the Laurentian University – Science North program in Science Communication.