The #Soapbox: Long Live the Queen, a tale of an Infestation 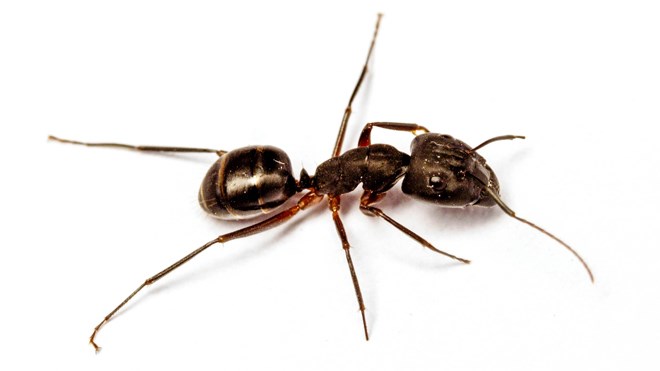 To end the reign of a stubborn queen, D’Arcy Closs had to get serious about an ant infestation, and that meant getting into the walls. (MC)

It began with a few ants inside the house, and only in the summer. Nothing to be alarmed about.  Several years later, though, when they started appearing throughout the winter, it was a troubling sign, suggesting they had established a nest inside.

By that time they had become regular denizens of the kitchen, crawling cursorily across counters, scurrying out from under a lifted plate or creeping cautiously from under countertop lips, their antennae twitching, searching with the hive-minded tenacity of the insect, selflessly serving Queen and colony.

Not only were these ants now everywhere, they were carpenter ants: large and notoriously resilient. They consumed Borax and sugar concoctions with few casualties; they used vinegar spray as a body wash; they seemed to thrive on the peanut butter, growing larger from the protein burst.

And then — alarmingly — the winged carpenter ants appeared. Larger than the others, but fortunately dozy and, merciful God, incapable of flight. They would appear with odd regularity atop the kitchen window’s trim, always in that same spot and always at the same time, in clumps, crawling over each other.  They would then move singularly and inexorably across the kitchen floor towards some still dawning destination.

There could no longer be any delay.  The time had come for eradication.

The trim around the kitchen window was the first thing to be removed, to see what one could see.
A few ants resided there, sentinels who, suddenly exposed, scurried up behind the drywall.

Removing window trim is one thing; cutting into drywall is a slightly more serious step.  While trim can be nailed back in place easily enough, a hole in drywall would mean patching, and taping, then mudding, and sanding, and painting, and still things may never quite be the same again.

So just a small, probing cut.  To see what one could see.

A few more ants were revealed, at once disappearing from sight into the recesses of the wall.  Moments later, though, they returned, perhaps by force of habit, or perhaps, like all longstanding imperious empires, not wholly able to come to terms with the idea of vulnerability in a previously unassailable fortress.

More drywall was removed. To see what one could see.

And there it was: the cloistered colony! Masses of ants, winged and wingless, habituated in the window header’s heavenly home.  They had bored it out into stratified layers, and it resembled a cross-sectioned science exhibit more than a proper header.  And now, exposed, subject to risk, finally in full view, every caste of ant frantically began an all-out emergency exodus. Helter-skelter they scattered: flummoxed minor worker ants toting legless larval grubs; major guards abandoning their posts; winged males and females wandering aimlessly without task.

A central vacuum hose from on high sucked up any ant not quick enough to disappear deeper into the remote regions of the wall where the ragtag remnants of the colony moved to.

Over the next few days foraging worker ants began to emerge from the baseboards as the colony attempted to regroup.  Now was not the time for experimental homemade baits. Potent store-bought units were brought in and strategically placed.  The workers came in droves, desperate for food after their upheaval and relocation, and drank their fill of the liquid poison then disappeared back into the walls.

A day long absence of activity followed without a single ant making an appearance. And then the colony shuddered, heaved, and sporadically spat forth from the baseboards their dazed denizens doubtlessly poisoned.  Out they dribbled, a shell-shocked army of zombie ants, discombobulated and on splaying last legs, unable to go far or even in a straight line.  What grandeur they had was gone, and killing them now was a merciful act, preventing as it did the disoriented dance of the poisoned.

Days passed with only the odd ant emerging.  As these days piled upon each other like so many winged ants, somewhere behind the walls, surrounded by dedicated but dead workers, having consumed a lethal amount of regurgitated poison, a Queen’s reign came to an end.

#TheSoapbox: I never realized how hard it is not to touch my face
Apr 6, 2020 9:00 PM
Comments
We welcome your feedback and encourage you to share your thoughts. We ask that you be respectful of others and their points of view, refrain from personal attacks and stay on topic. To learn about our commenting policies and how we moderate, please read our Community Guidelines.