The angry boy with the thumbtacks

Mischievous, obnoxious, careless, aggressive – these were all words used to describe Steven by his previous teacher in Soweto before joining us at Zawadi la Tumaini.
0
Aug 8, 2013 7:18 PM By: Jacqueline Villeneuve - Adventures in Hope 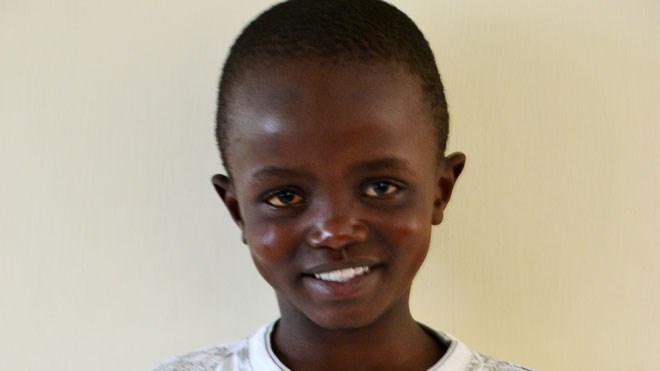 The smile on Steven's face disguises a young life filled with far too much pain. Supplied photo.
Mischievous, obnoxious, careless, aggressive – these were all words used to describe Steven by his previous teacher in Soweto before joining us at Zawadi la Tumaini.

During his first night in our home, Steven seemed eager to prove all those accusations true. Fifteen minutes after we put the children to sleep, we were woken up by screams coming from the younger children in the boy’s dorm.

As Jerusha, our house mother, and I ran to the room, the younger children charged out, into our arms, and immediately began rambling about Steven. They said he had taken out the thumbtacks holding up the curtains in the room and began poking everyone in the dorm room. Next, he put the tacks into his mouth and was telling the children he would bite down and poke holes in his tongue.

Seated on his bed, Steven tried to look innocent, but he gazed at us suspiciously.

Immediately, Jerusha and I knew the children weren't exagerrating. Steven was going to provide us with an interesting new adventure.

By his second week with us, Steven was still quite distant. Jerusha and I had a hard time understanding his personality. Whenever we would engage him in a game of soccer or Go Fish, he would pull away the minute he noticed we were all having fun together.

This reticence was born of self-protection, we learned, and was rooted in his earlier childhood experiences. Steven and his 12-year-old brother David — who also lives in our home — grew up with parents who suffered from addiction. Their home was a domestic battleground.

Then, one day, everything changed. Their father was murdered and their mother abandoned them, so the children moved in with Shosho, their grandmother.

Life changes — we never know what will happen. Sometimes events occur that alter our lives forever. When we started Zawadi la Tumaini, we realized children's lives would be changed, but we never imagined how quickly we would see transitions.

Steven came to us as a closed-off, scared and sensitive little boy. When he arrived, we were worried it would take years to make a difference in his life and to see a change in him.

Now, only three months later, Steven has moved up from baby class to pre-unit. He has started using his words to explain what he wants and feels, rather than being physical. Steven went from being a child who misbehaved to seek attention to being the head boy of his nursery class.

Steven has created strong friendships and bonds with his new family and comes home every day with a big smile on his face.

Life changes and, thankfully in this case, it has changed for the better.