In times of tragedy, we often try to find words to express the emotions we are experiencing. And following the attacks that took place in Nairobi on Sept. 21, I have no words. The pain I feel for my city leaves me with a sinking feeling in my chest.
0
Oct 10, 2013 4:51 PM By: Jacqueline Villeneuve - Adventures in Hope 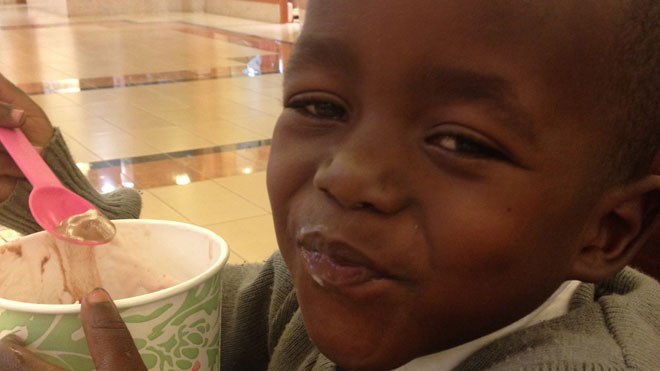 Zawadi la Tumaini orphan George Kamau enjoys a frozen yogurt at Westgate Mall after a dentist appointment at Aga Khan Hospital. Supplied photo.
In times of tragedy, we often try to find words to express the emotions we are experiencing. And following the attacks that took place in Nairobi on Sept. 21, I have no words. The pain I feel for my city leaves me with a sinking feeling in my chest.

As I sat in my apartment, just 10 minutes from Westgate Mall, I thought of the countless families who would be there with their children, perhaps doing weekly groceries at Nakumatt superstore. I thought of the previous night, sitting in Westgate with my friend Hannah, enjoying a cup of coffee.

Some 15 hours later, the mall was under attack from the terrorist group, Al Shabaab.

To the sound of sirens and helicopters outside, everyone was glued to their televisions or watching the live stream online. It was as if time stood still for those of us outside the mall.

We watched in horror as innocent people were rushed out of the mall with gunshot wounds or injuries inflicted by grenades. We watched as children were carried out of the mall in tears, as women were pushed out in shopping carts and bodies laid lifeless in the mall’s main entrance.

Together the nation, Kenyans and foreigners, stood together in mourning.

As the events of the day unfolded, many families’ lives changed forever as loved ones were lost. I called our house mother at Zawadi la Tumaini and explained what was happening. I spoke to the children and together we said a prayer on the phone. Thankfully, our home is nearly 40 minutes away from Westgate. We were not directly affected by the attacks, but many people in our city were. Our hearts broke for them.

People from every ethnic and religious background, expats and Kenyans of every tride, joined together to donate blood.

The staff of Zawadi la Tumaini spent a day donating blood. The children made signs sharing a message of unity, “We Are One.”

The purpose of terrorism is to separate a nation, leaving it paralyzed with fear. I saw the opposite.

In the two years I have lived in Nairobi, I often ask people where they are from and they tell me the name of their tribe. After the tragic attacks that occurred at Westgate Mall, the nation stood together proudly as Kenyans.

Hanmer resident Jacqueline Villeneuve chronicles her efforts to provide a refuge for HIV/AIDS orphans in Kenya at the Zawadi la Tumaini Children’s Home. Zawadi la Tumaini translates in English to “gift of hope.”