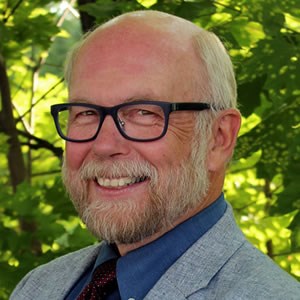 Bill Crumplin, aged 63, moved to Sudbury from Sault Ste. Marie in 2003 having been hired by Laurentian University. Born in London, Ontario, he has lived, studied or been a professor in three provinces and seven Canadian cities, as well as spending over a year in Trinidad and Tobago working on his Ph.D.  He feels this experience, plus the 26 years he has spent teaching urban design and how it can be used to develop healthy neighbourhoods and expand economic opportunities while simultaneously regenerating the natural environment, allows him to bring a unique perspective to the role of mayor.

Bill loves Greater Sudbury for several reasons. The most important for him is how friendly the people are.  He lived in Newfoundland for two years and compares the friendliness of Sudburians to that of Newfoundlanders who are famous for their hospitality and friendliness.

He also loves living in a region that is surrounded by many opportunities to experience nature that are only minutes away. Bill has also been enchanted by the strong sense of community Great Sudbury offers. In his 15 years living here, he has come to know some of the region’s history and cultural strengths.  For instance, he has first-hand experience with the region’s landscape of the early '60s and '70s as his family vacationed here every summer, visiting two uncles who worked for INCO.  Bill recalls many late August days swimming at Meatbird Park in Lively and recalls the construction of the Superstack.

He continued to visit the area over the years and witnessed the ongoing successes of re-greening and reclamation efforts. The re-greening of the region clearly demonstrates the community’s ability to come together to meet a serious challenge and transform the landscape to one that is featured as a success story in environmental studies text books used in universities across North America and beyond.

A professor of geography and environmental studies for 26 years, Bill has become very aware of human caused environmental problems. He is extremely concerned about the negative impacts that our fossil-fuel-dependent urban development and industrial agricultural systems have had on ecosystems and human physical and mental health. To Bill’s frustration, he feels that governments at both the provincial and federal level have neither the foresight nor the courage to explore new ecologically friendly economic opportunities. He feels that we can tune our existing economy to include the needs of the 21st century while matching the desires of many milennials by encouraging innovation and development using green technologies for non-renewable and renewable alike. Doing so, he feels, we position our city well to attract and/or keep young people in our communities as we focus on the future needs and health of our children, grandchildren, city and our ecosystems.

He feels strongly that the most fertile arenas for developing components of a green economy are at the grassroots and the municipal levels. It is at the local scale, he feels, where the evidence and impacts of climate change are being felt first and, therefore, where the success stories will also be noticed and become influential; just like the re-greening of Sudbury.

Bill feels strongly that cities and their citizens should incorporate planning strategies and changes so that the generations coming after us can enjoy a healthy life complete with a nourishing, natural environment. He thinks that many eco-city planning ideas by scholars like Jane Jacobs and Richard Register can serve as guides to creating healthy, interesting and vibrant communities and cities. He believes in the Indigenous concept of acting with the next seven generations in mind. To Bill, a major part of this philosophy is the concept of the precautionary principal: if there is no proof a development will be safe for people and the ecosystem it then must be postponed until supporting evidence or solutions are available.

In 2013, Bill received the Service to Ontario Geography Award from the Ontario Division of the Canadian Association of Geographers (CAGONT) for his dedication toward promoting geography in the province. Bill served two terms as the president of CAGONT (2004-10). He has been acknowledged several times for his dedication and contribution to student success by Laurentian University’s Centre for Academic Excellence, and in April, 2018 he was the Laurentian University winner of the Ontario University Students Alliance’s Teaching Excellence Award.

Bill is a past member of the Sudbury and District Obesity Prevention Panel (2005-09), the Greater Sudbury Food Advisory Panel (2015-16), and past member and vice-chair of Board of Directors of reThink Green (2014-16). Bill was also an invited member of the City of Greater Sudbury’s Downtown Community Improvement Plan Committee (2005-09).  In 2014, Bill created “Earth Tracks”, a weekly two-hour radio show organized around environmental themes. Earth Tracks was broadcast on Laurentian University’s CKLU 96.7 FM station, Wednesday afternoons between 12 and 2 p.m.

In 2016, Bill suddenly lost his wife to a rare condition. He was also subsequently diagnosed with cancer. These personal experiences have reinforced Bill’s concern that we must put the health of our environment first because human health is closely tied to that of our immediate ecosystems and the planet at large.  Bill has been cancer-free for two years and consequently, he relishes time with his family, friends and students, writing poetry, drinking craft beer and values each sunrise and sunset, knowing that life is a precious gift.

Bill sought public office in the 2018 Ontario provincial election representing the Green Party in the Nickel Belt Riding. He enjoyed the experience of meeting local constituents and was approached by a group of citizens to run for mayor because they liked his messages and personal and campaign styles.

He looks forward to working with the talented and dedicated staff and management of the City of Greater Sudbury, fellow citizens, the new council, community groups, health care and educational groups, local businesses, developers and senior levels of government to establish and build an eco-city legacy through urban design for future citizens and our ecosystem. He sees this being done on the three pillars of social, ecosystem and economic health and feels very strongly that there is a wealth of talent in our local communities to do so.

Bill also feels that is perfectly acceptable, even desirable, for some benefits of planning and policy development to accrue for Sudburians not yet born. After all, look at the time taken and what the community continues to accomplish re-greening the “moonscape”: together, he believes, the citizens of Sudbury can become an example for not just re-greening our ecosystem, but we can also “green” the city’s culture, economy, and politics.