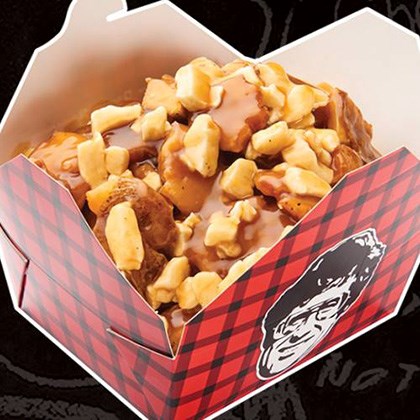 What inspires a man to launch a rocket into space? What compels him to flex his biceps to Hulk Hogan proportions? And what greatness causes a man like SMOKE to create the most gastronomical dish of all time? Legend has it, the same reason for all of MANKIND’S GREATEST FEAT – to win the affection of a girl. Yes, a girl. Smoke spent days and nights turning the precious Canadian Poutine into a TOTALLY BITCHIN’ CONCOCTION that would win over the taste buds of a Molly Ringwald look-a-like so he could moonwalk straight into her heart. He cuts potatoes with the determination of Wolverine’s retractable claws, he smothered them with gravy and cheese curd, but he didn’t stop there, oh no! In a LOVE-STRUCK CRAZE he added double-smoked bacon, caramelized onions, sautéed mushrooms and chipotle pulled pork. He presented the box to his sweetheart and it was LOVE AT FIRST PLASTIC FORKFUL. The taste had the power of 100 mixed tapes and they wed immediately. Smoke realized that he couldn’t keep this secret to himself, that he could use it to help ALL OF MANKIND. Thanks to the power his Poutine, he was ready to answer the call of grumbling stomachs far and wide. After all, the love of POUTINE NEVER DIES.