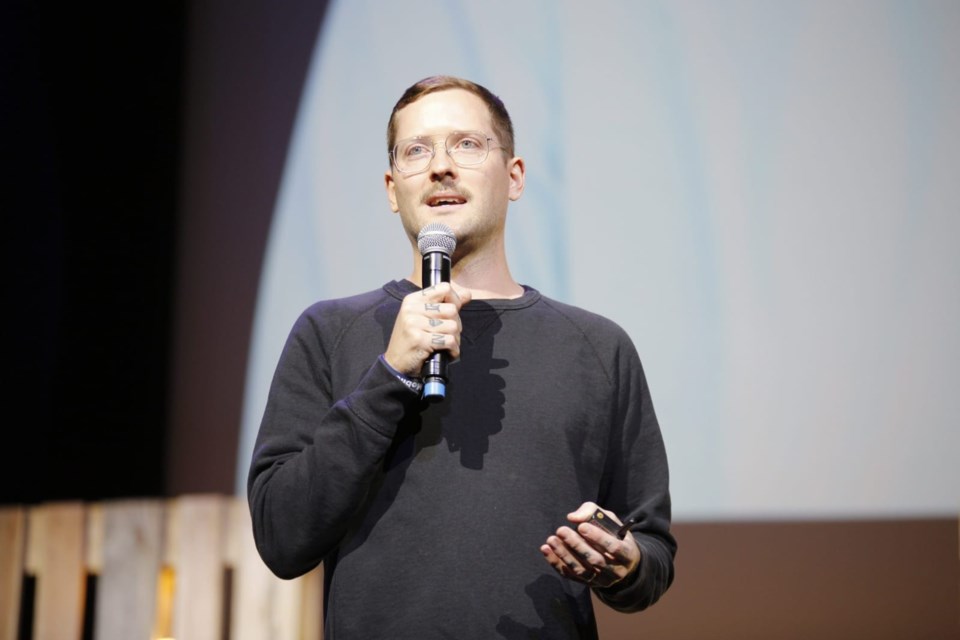 Frank Bach is the lead product designer for Headspace. He is a guest speaker at the Charged 2019 event in Greater Sudbury. (Supplied)

A Sudburian who now calls the City of Angels home is back in Northern Ontario this week to talk technology at the Charged 2019 event on Oct. 10.

As the lead product designer for an app titled Headspace, Frank Bach (formerly Frank Chartrand) knows a bit about technology. Headspace is a guided meditation and sleep app that provides courses and tools to help people learn to meditate, practise meditation on many topics like anxiety and stress, and also audio sessions to fall asleep.

“Everything offered in the app stems from mindfulness — the idea of focusing on the present moment,” said Bach.

The idea of Headspace has been around for more than a decade. It comes from the the minds of co-founders Andy Puddicombe and Rich Pierson, Bach said.

Puddicombe was a former Buddhist monk who trained for a decade, moving from monastery to monastery around the world, before settling back into civilian life in London. Pierson was a stressed out ad guy and hired Andy as a guide to help him de-stress.

They had the idea of offering the teachings to more people. At that time, the App Store wasn’t as developed as it is today, so they started off doing live events around London, said Back.

This desire to reach more people eventually led to Headspace packaging the courses and teachings into an app. It has been nearly 10 years since the founding of the company.

“Our last milestone moment was surpassing one million paying subscribers. Since launching, we’ve got more than 60 million downloads. Our plans for the future are to keep bringing health and happiness to the world, and encouraging people to get more Headspace.”

The Headspace team is based in Los Angeles, with offices in San Francisco, New York and London. In total, around 300 people work on the app every day, Bach said.

Bach is no stranger to speaking in front of a crowd.

“I usually talk about topics ranging from digital product design to innovation and creativity, with a dash of mindfulness thrown in,” he said. “Last year, I had the opportunity to speak in Paris, France at the MobileOne conference, and next month I’m speaking in Cologne, Germany at Digitale Leute Summit.”

At Charged, Bach will talk about designing for joy. He will share strategies and lessons on how to create apps that break down barriers between humans and technology. His talk starts at 7:45 p.m.

Coming home to Greater Sudbury to speak at the Charged event is something Bach couldn't pass up. He said he's been a fan of Charged for quite some time.

“It’s incredible to see what Kyle, Chrisanne and team are doing up north,” he said.

The Charged Conference features insights from prominent industry leaders with unique and engaging perspectives on technology and design. The conference consists of a daytime workshop, an evening featuring two speakers, followed by drinks and conversation.

Charged is a Sudbury-based not-for-profit fostering collaboration between design and technology. By bringing expert speakers and instructors into the community, Charged works to educate and underscore the importance of multi-discipline teams, projects and business.

“Bringing together design, engineering, and business audiences isn’t an easy task, but they seem to have found a niche for it in Sudbury,” Bach said. “I’m looking forward to the workshops, Andrea Crofts talk on Digital Health, and seeing some familiar faces at the event.”

Living in Los Angeles certainly comes with its perks, he said. The city is huge, he said.

“Geographically, there's lots of space, lots of driving. Between the east and west side of the city, there’s probably a dozen neighborhoods that could easily be their own cities, much like the amalgamation of Greater Sudbury’s communities.”

“Most people I meet are either actors or writers, though the economy is pretty diverse with a lot happening in tech and media, as well as more classic industries like health care and education,” he said.

“I grew up skateboarding, listening to punk rock and hip hop, and all of those things come from SoCal. I totally feel at home here, even though I miss Northern Ontario every day.”

The Headspace app is available in the App Store, Google Play Store, and on voice platforms like Alexa and Google Home.

Bach and his wife, Terrie, just launched a shop called Sunshine Shop offering a clothing brand centred around wellness. You can see more at www.sunshineshop.la.