On chicken dashboards and gaining insight through data science 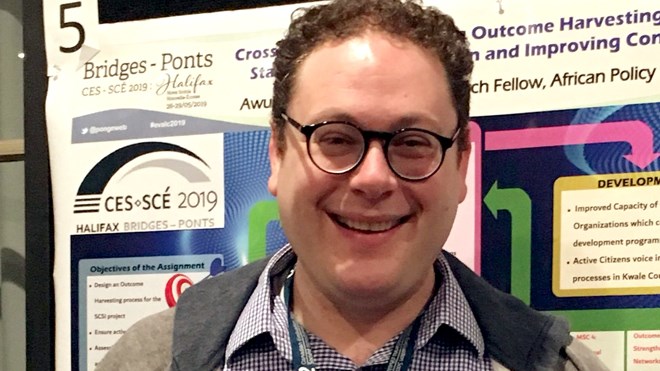 Sidney Shapiro is a data scientist studying social media analytics as part of his PhD research at Laurentian University. He is also the co-ordinator of the Business and Crime Analytics programs, part of the cluster of data analytics programs at Cambrian College. (Supplied)

As part of Sudbury.com’s ongoing Community Leaders Program Discover Series, Dr. Mike Commito, Director of Applied Research & Innovation at Cambrian College, who is often referred to simply as Dr. Mike on campus, is sitting down with researchers and entrepreneurs in Sudbury to spotlight the innovative work they’re doing in our community and beyond.

This week, Sidney Shapiro stopped by Dr. Mike’s office in the Glencore Centre for Innovation at Cambrian College. Shapiro is a data scientist studying social media analytics as part of his PhD research at Laurentian University. He is also the co-ordinator of the Business and Crime Analytics programs, part of the cluster of data analytics programs at Cambrian, where he and his students solve problems by breaking down complex data sets.

When he’s not in the classroom, Shapiro is an integral part of the Applied Research team at Cambrian College, where faculty, researchers, and students come to together to innovate with industry partners. Data informs all of Shapiro’s research, but no two projects are alike. In his time in applied research at Cambrian, Shapiro has been involved in projects that have range from potato monitoring to risk analysis for surface vehicles in the mining industry.

Over the course of their chat, Dr. Mike and Shapiro talked about his research, the importance of mastering Excel, and how one of his students got a job by building a chicken dashboard. Yes, you read that correctly. The transcript has been lightly edited for clarity and length.

Mike Commito: Data is everywhere. It’s all around us. What should people be aware of in this age when it comes to their data?

Sidney Shapiro: As an individual, you really need to be aware of who has your data. Your data is worth money. People want to know more about you because they can sell you products. I think people have a newfound appreciation that they are the product, and that their data is being sold to advertisers. Whether you’re trying to get cheaper airline tickets and they’re basing the prices on your shopping history or you’re getting custom-Amazon pricing because they’re trying to sell you products at a price point they think you’ll spend. That’s the new reality. There’s a much bigger awareness that we need to get a lot smarter about privacy and data security in order to figure out what’s going to happen in the future.

MC: What is your PhD research about?

SS: I’m looking at social media analytics. What I’m interested in is that, every day, you seemingly hear something about what Donald Trump has said on Twitter. But you usually hear that from someone who is not Trump, unless you follow him. Since the vast majority of people don’t follow him, most people hear these updates from someone else in the middle of the social network. My question is, who is that person?

We talk a lot, in marketing and social research, about who that network influencer is. The person inside a network who is moving the conversation around and taking the information that you need and pushing it to you or propagating your messages throughout the network. But usually they are invisible. To understand what is going on, we usually randomly sample this big network so get the pulse of what people are saying. To get a random sample, we would ask a whole bunch of people what’s going on and try to stratify our sample. Ultimately, we’d ask many people who have no idea about what’s going on. Because they’re not in the know and they’re not in the organization’s hierarchy. There are many situations where you are part of a group. I am a member of many on Facebook, but really don’t understand the inside gossip of what is going on. We can see this in any organization and every social network.

What I want to know is, if I can find the people who are really in the know by identifying them using statistics within the larger network and understand how they influence those around them and find out what really is going on within the group. It’s kind of like snowball sampling on steroids. I find the person who is the key informant inside the network, and once I identify that person, start connecting outwards to find out who else they are in touch with, and who are the important movers and shakers in the network.

MC: When you’re not analyzing Trump’s tweets for your research, you co-ordinate the cluster of data analytics programs at Cambrian College. These include crime analytics, business analytics, and core courses in health analytics. What do you hope the students get from these programs?

SS: It’s all about problem-solving. It’s about figuring things out. Getting strange data sets, analyzing them, and figuring out what we do next. I think today we have two paradigms that exist in the world. We have evidence-based decision-making and decision-based evidence-making. You see both of those things happening in the news, and we try to train students to find the best answers to recommend the best course of action. For the students, the assignments are always new and interesting. In one scenario, your boss comes in and says, “We want to invest in fish stocks, here’s all the data, you figure it out.” While the next week they may be looking at crime rates or coffee stocks, this prepares them for crazy things they will analyze in whatever industry they’re working in.

MC: When we first met, you were teaching Excel courses at Cambrian. Excel is a program I always wish I was better at. Can you talk about the importance of mastering Excel?

SS: Everybody uses Excel to some extent. If you work in an office, guaranteed you’ve used it to put numbers into it. But the catch is you don’t know the ninja tips and tricks. As I tell my students, if you knew that one tiny formula, you could save 100 hours and be the hero of your office. That’s really what we’re teaching students. The real strength is knowing how to organize data. When they do this, really amazing things happen.

I also teach an advanced Excel class to my analytics students. One of the students built a dashboard based on chicken supply. He worked at Montana’s where they stack steaks, which are very small in size. They had a chicken promotion and it turns out, chickens are much bigger then steaks. In his project, he had to figure out how many chickens could you fit in each truck and how much space are they going to take up. Of course, once the truck arrives, they then had to figure out how much space they would take up in the restaurant. He built a very complicated chicken dashboard and the chicken dashboard actually got him a job working as an analyst for another company with the exact same supply management concept. All in Excel.

MC: You weren’t always a researcher and data scientist: how did you arrive on this path?

SS: My parents and most of my siblings have graduate degrees ranging from medicine to engineering and social work. When I started university, I always had this idea that I would do something related to medicine. My path to where I am now was very confused. I have a degree in political science (international relations) and took additional courses in law and anthropology. I did a lot of archaeology and really enjoyed field work, but since there’s no jobs in archaeology, everybody said that’s a terrible career path and you need to do something else. I started university not really knowing what I was doing and I signed up as a psychology major. I found it very, very difficult because I quickly found out that to be a psychologist, you needed 10 years of university, and I switched to political science and met my supervisor. Ironically, 10 years later, I’m still in university, still learning from the same mentor and supervisor, Dre. Aurélie Lacassagne. I ended up doing a Masters in Sociology with a focus on applied social research, and that led to the PhD.

MC: Where do you see the future of data analytics going?

SS: Everything is becoming reliant on some kind of data and that means that businesses are trying to make better decisions based on actual numbers and not just go by gut feeling because, quite often, you can find out things you really had no idea before. We see this playing across every industry in every sector because companies want to do more with the resources they have. The future is taking data from different sources, mapping it together and making things happen. Understanding how to move that information around and transform and make computers talk to each other is really what this is all about. A lot of that comes down to how much, why and when. As we’re on the cusp of the next technological epoch such as AI and machine learning, there’s going to be huge change in how we do things. Understanding how data works, and how it helps, is going to be critical in every industry going forward.

Mike Commito is the Director of Applied Research & Innovation at Cambrian College. If you missed Dr. Mike’s first Q&A with Dr. Mykytczuk, you can read it here.