The Grade 12 Lo-Ellen Park student has been to science fairs around the world. He sits down with writer Ella Myers to talk science, research and, like any good teenager, video games
Oct 1, 2019 11:50 AM By: Ella Jane Myers, for Sudbury.com 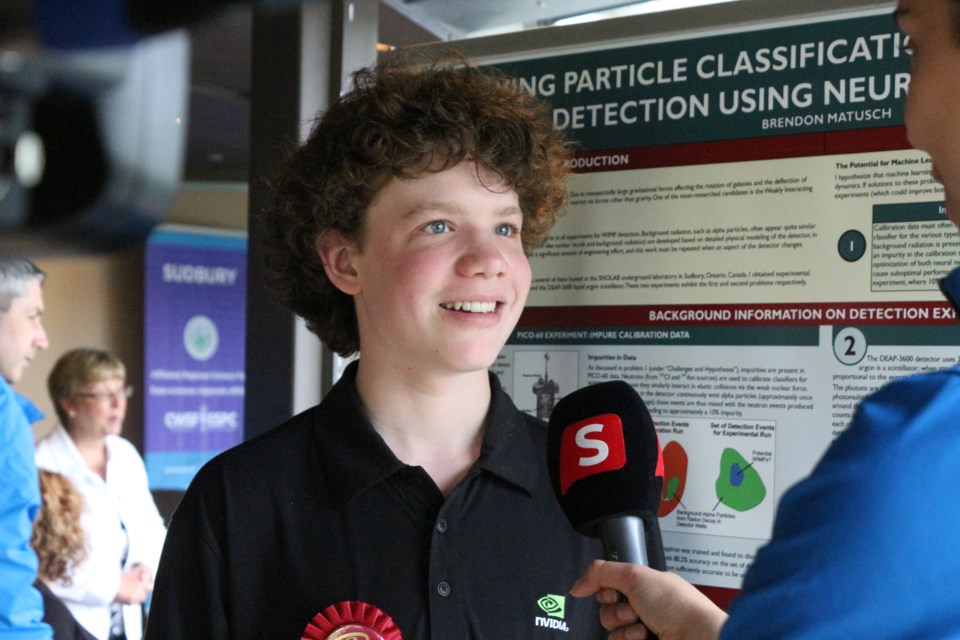 For Brendon Matusch, science is a lot like art.

“What I love about science and engineering is that you can think of it like painting and writing, except that your canvas is stuff that you build in the real world,” said the Grade 12 Lo-Ellen student.

Matusch has spent his high school career sharing this poetic passion for science through his award-winning research at science fairs across the country, and around the world.

After heading to his first Canada-wide science fair in Montreal in 2015 when he was in Grade 8, he went on to present in Regina, Ottawa, Ireland, and Arizona. At the time this was being written, he was at yet another fair, this time in the high tech metropolis of Abu Dhabi, United Arab Emirates.

Matusch’s interest in science started far earlier than his science fair fame, though. The child of two systems engineers, he was exposed to science early and often.

“I have to give them a lot of credit for getting me interested in it at a very young age,” said Matusch.

At first, his primary interests were out of this world: from about four or five onwards, he was obsessed with space.

“I always liked looking at the stars and finding planets in the sky, and I spent a lot of time reading about astronomy and physics and solar systems,” said Matusch. “I guess part of it was being interested in questions like: What is the Earth, how did it come to be, what is the solar system?”

“The other thing I spent a lot of my childhood doing was programming video games,” laughed Matusch.

Eventually, that evolved into a fascination with machine learning: the idea that rather than programming an AI to do something, you can teach it to learn how to do something on its own.

Throughout high school, machine learning became his primary focus. Many of his science fair projects on around it, and this summer he worked on a specific type of machine learning called reinforcement learning.

“It’s learning based on changing rewards, a lot like how animals learn,” said Matusch.

Interestingly, Matusch had the chance to combine his two major scientific interests — space and machine learning — when the director of SNOLAB, Dr. Nigel Smith, invited him to work at the high-tech laboratory in the dark depths of Creighton Mine for a summer after he won the 2018 Canada-wide science fair.

His work at SNOLAB focussed on training a computer to distinguish between certain particles and dark matter.

“We have this whole ocean of articles that are flying around going through a detector,” explained Matusch. “In dark matter experiments, one of the major challenges is the fact that, if it exists, it’s extremely rarely interacting, it almost always passes through things without interacting, like neutrinos.”

By teaching a computer to distinguish between different particles, they hope that ocean becomes a bit more navigable.

While Matusch still has a few months left of high school, he already has big plans for after.

He’s hoping to study computer science or machine learning at Stanford or MIT (Massachusetts Institute of Technology), American universities renowned for their science and engineering programs.

Beyond that? It’s yet to be decided

“I like the idea of starting my own business, I’m not sure doing what yet. Robotics and automation … I don’t really know yet to be honest!” he said.

Matusch may not be decided on the specifics yet, but he’s crystal clear on the bigger picture.

“I love coming up with an idea and then seeing it work,” said Matusch. “That’s the most exciting thing for me.”

Ella Jane Myers is a freelance writer in Greater Sudbury.