You might lose weight on keto, but it’s not the healthiest way to do it 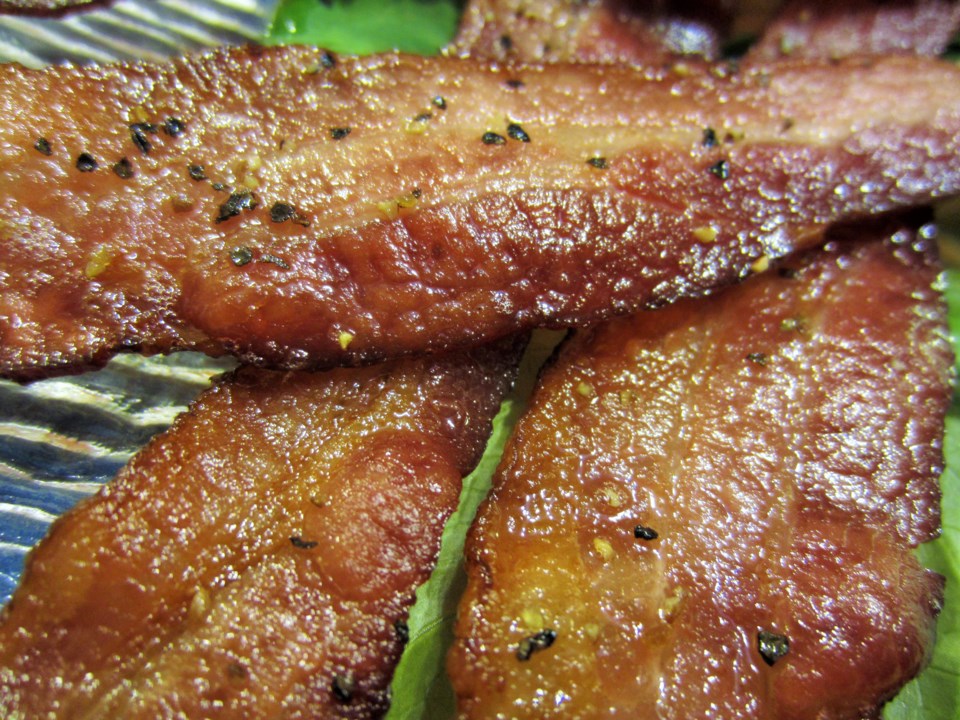 Bacon. Fruit of the gods, great pleasure of man – or as Comedian Jim Gaffigan puts it: “Bacon's the best. Even the frying of bacon sounds like applause.”

So when you choose to undertake a new diet or eating plan, and one advertises the ability to eat bacon to your heart’s content, well, that’s a diet that most people can get behind. Especially when you then learn about its intention to trick your body into burning fat – a sort of “biohacking” that is all the rage now.

Full fat everything, steak and butter and yes, all the bacon you can eat. The Ketogenic Diet is a marketing dream – the ability to lose weight, and very, very fast, while still eating what you love.

So much so that the advertising and word of mouth has gone far beyond what science has proven about its long term effects. So while you are losing weight, feeling full and loving the eating plan, you could creating unknown issues. If an informed choice is the best choice, it’s time to find out a little about the diet, its history, and its future.

The Ketogenic Diet is based around the idea of eating your way to a metabolic state that occurs when your liver begins to use stored fat to produce ketones for energy.

“Glucose, which comes predominately from carbohydrates, is our body’s primary source of fuel for many important body functions,” says Registered Dietitian Paula Ross. “When glucose isn’t available because of insufficient carbohydrate intake, the body uses protein and fat in alternative metabolic pathways to create energy. It is believed that this alternative metabolic pathway can result in weight loss.”

And though it only recently entered the lexicon for most, it is a diet that had its beginnings in the 1920s as a treatment for epilepsy – particularly in children. And though research is always ongoing, the treatment is still used; the idea is that in denying the brain access to glucose and converting it instead to ketone-based metabolism, the brain’s electrical energy will be dampened.

A person with epilepsy – a disorder that means someone is prone to seizures, or that they have had two or more – has an electrical abnormality in the brain; normal electrical pattern is disrupted by sudden and synchronized bursts of electrical energy that affect consciousness, movements or sensations.  So it follows that dampening that electrical energy in a person with what’s known as intractable epilepsy – one that is not responding to traditional treatments – would assist in reducing the seizures.

But the reason it is used so often in children is that it is a severe and hard-to-stick-to diet, requiring medical supervision (and quite often the use of feeding tubes) to give the patient just enough nutrients that they can continue to develop normally, but also that the seizure activity slows or stops. Even when children are eating solid foods, they must be calculated, weighed and measured – even down to toothpaste.

As you can imagine, it is not a long-term solution.

The reason is the makeup of the diet, how hard it is to maintain, and the supervision it requires.

Of course, that’s for epilepsy. The Ketogenic Diet for weight loss is different, but not by as much as you would think.

There are many different versions of the consumer form of the diet, now hundreds of books featuring recipes and percentage breakdowns, but a common refrain is the need for about 75 per cent of your calories from fat, 20 per cent from protein, and five per cent from carbohydrates.

Using the same nine calories to one gram of fat, but also four calories per gram of carbohydrate, and the same for protein, the makeup looks like this: 167 grams of fat; 100 grams of protein; and 25 grams of carbohydrates.

But the idea of bacon being the perfect diet food is one you might strain to believe, because really, anything that tastes so good you want to die is probably playing the long game and killing you in some way. That, and it doesn’t have a lot of nutrients.

“Because a ketogenic diet is so restrictive, there is the potential for an individual following this diet to develop nutrient deficiencies,” says Ross. “Nutrients of particular concern on the ketogenic diet are calcium, vitamin D, selenium, magnesium, zinc and phosphorus. Due to the potential impact on nutrient deficiencies, dietary planning focusing on nutrient-rich food choices is important, especially so when restricting both energy and carbohydrate intake.”

And while the ketogenic diet is changing – you may have heard of  “clean keto” versus “dirty keto” as an attempt to focus more on unsaturated fats - it is still quite difficult to attain that level of fat without adding in a great deal of animal proteins.

But if you do succeed, if you are able to get your body into ketosis, forcing it to burn fat, you will almost certainly lose weight. That is the reason for all the enthusiasm behind the diet.

You will lose weight, and fast. Sure, you will have to count every calorie, gram of fat, carbohydrate and protein and recount again. Eat too much protein even, and you’ll be forced to reckon with your body once more.  If you use one of the multitudes of ketone tests available, join the message boards and devote yourself to this eating plan, you will lose weight. At the beginning anyway – though studies are showing that there may be no clear advantages over other types of weight loss diets.

It’s what happens after that initial loss that can be tricky.

First, it is plainly said by most proponents of the weight loss diet is that it is not a long-term solution. Even Dr. Josh Axe, a devotee and author of several books on the diet, says that it should not be undertaken for more than a few months at a time, before moving towards a less-restrictive maintenance phase. There are also those who have moved to “keto-cycling” - a more flexible version that allows you to have cheat days, with the idea that you will move back and forth between ketosis – and while it may be easier to stick to, it is also harder on your body and you may be prone to bingeing.

And part of the reason you are losing weight so fast isn’t just the ketones. “The primary reason people see results when following the ketogenic diet is because they are severely restricting carbohydrates, including removing ultra-processed carbohydrates - foods that are high in added sugars, such as soft drinks, doughnuts, cookies, cakes and pastries, etc. -  and they are reducing their overall caloric intake, which will result in weight loss.” So those are the first changes – just you eating a little better.

“They also see a decrease in the number on the scale because of the loss of glycogen and protein along with large quantities of body fluids and important minerals. Many individuals confuse this weight loss with fat loss, failing to recognize that they are two different things and when once the individual returns to well balanced meals, their body will retain the needed nutrients and the weight will return,” adds Ross.

As well, if you’ve ever heard the term “keto flu,” or smelled the breath of someone who is on the diet, you might be aware of some other difficulties. The flu is a result of your body shedding an addiction, really – and sufferers have compared it to giving up caffeine. It can cause nausea, fatigue, headaches, constipation and bad breath as a result of acetone, the smallest of the ketones, which is released during ketosis and can only escape your body through your breath and urine.

Of course, there is another issue: if you have kidney disease, or issues with inflammation of your joints related to gout, this is not the diet for you.

And of course, if you step out of ketosis, this happens all over again.

The difficulties have not made the diet any less popular though.  In 2019, ketogenic diet was the most-searched food-related item on Google, and a poll by Dalhousie University says that 26 per cent of Canadians have either adopted the ketogenic diet, have tried it, or have considered trying it in the last 18 months. But that’s also probably why double the number of Canadians have stopped and started than are still on it.

For those who have had success, the next question is, what are the effects over the long haul?

Because that’s what the studies are showing – mostly because there really are no long-term (more than 12-24 months) studies into the way moving in and out of ketosis can affect your body. Not to mention that a majority of people try the diet without medical or nutritional support, and that could mean malnourishment, or other unknown issues, even while sporting that perfect beach body.

That’s then compounded by the issues with what’s known as weight cycling. Successful weight loss is often followed by regain once the weight loss plan is lessened in some way – you put the weight on, then try to take it off, and again and again – the yo-yo dieting can do some real damage.

But if the ketogenic diet as an eating plan sounds like something you could adhere to, the types of foods and the level of calculations that are required, then Ross suggests first looking at why that is – and perhaps make a few notes about what attracts you. Then, take your list to a registered dietician.

“We currently don’t have any strong evidence to support this diet as a sustainable and effective treatment for weight loss and the adverse effects of the diet are not known,” says Ross.

“Given the major impact of the ketogenic diet on food choices and the challenges with long-term adherence to the diet, I would encourage the client to consider a more balanced approach to weight loss that focuses on making sustainable behaviour changes resulting in successful long term weight loss and maintenance.”

While the ketogenic diet is one that is not going away any time soon, it is important to weigh the enthusiasm against the evidence – and right now there isn’t much. But if you work with a medical professional who can monitor your health, and you can afford to purchase the wide ranging ingredients, support apps and test kits you’ll need, there is weight loss in your future.

But it may be of interest to note that U.S. News and World report published their list of the best diets of 2020 – created by 25 judges in the medical and health fields, including Yale University Prevention Research Center founding director Dr. David Katz.

Discover: Is intermittent fasting the weight-loss cure people think it is?
Aug 25, 2020 12:01 PM
Comments
We welcome your feedback and encourage you to share your thoughts. We ask that you be respectful of others and their points of view, refrain from personal attacks and stay on topic. To learn about our commenting policies and how we moderate, please read our Community Guidelines.