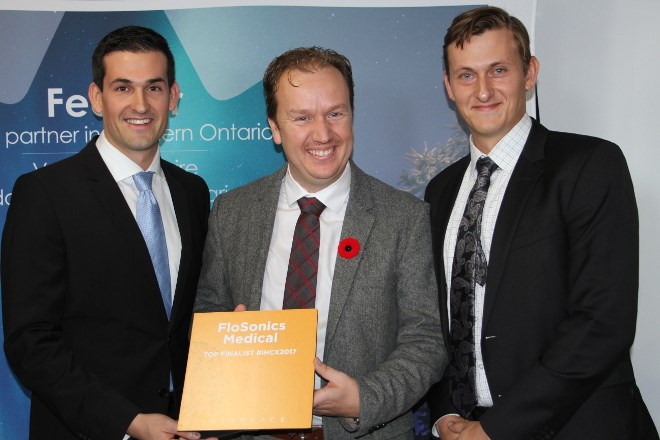 A Sudbury medical tech company is one of five companies vying for the chance to win $350,000 in startup funding from a leading U.S. accelerator.

Flosonics Medical will compete against four other companies for the startup funding from Los Angeles, Calif.-based MedTech Innovator, a leading non-profit startup accelerator in the medical technology industry.

More than 800 applications were submitted to the competition.

Launched in 2017, Flosonics is developing a wireless, wearable sensor that uses non-invasive ultrasound to provide real-time hemodynamic monitoring and improve the management of critically ill patients.

The competition finals will be held on Sept. 24 during the MedTech Conference in Boston.

Each company will have seven minutes to pitch their technology and answer questions from a panel of four judges. The audience will then vote in real-time to select the winners.

The first-place startup will take home a $350,000 non-dilutive cash prize. The remaining four finalists will each receive a $25,000 cash prize, and several incubator space awards will be presented from JLABS, the Gore Innovation Center in Silicon Valley, and Magnify at UCLA. In total, more than $500,000 in prizes will be awarded.

The other companies competing for the prize are located in Pittsburg, San Francisco, Perth, Australia, and Galway, Ireland.

“Each year, the audience at The MedTech Conference is faced with the difficult decision of choosing only one winner out of a group of impressive and transformative startups, and this year will be no exception,” said Paul Grand, CEO of MedTech Innovator, in a news release.

“Even though only one company is voted the grand prize winner, all 50 companies in the 2019 cohort are on an important path to improving patient lives and the healthcare system as a whole through their innovative technologies.”

Since 2013, MedTech Innovator has reviewed more than 3,000 startups and graduated 185 companies that have gone on to raise more than $1B in follow-on funding and bring 37 products to the market.