Editorial: A $114M day for Laurentian is a great day for Sudbury 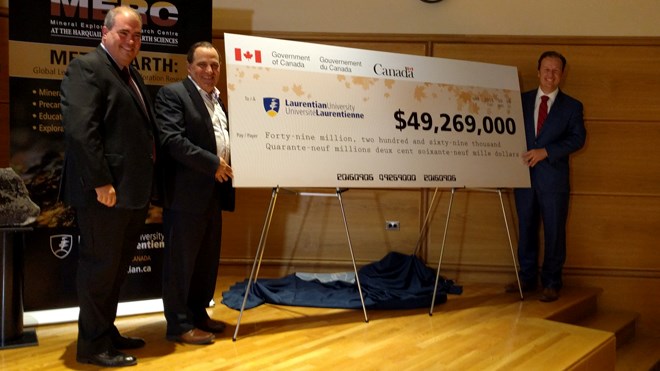 Few places know the nature of the mining sector better than Greater Sudbury. We know mining is cyclical. We’ve — repeatedly and with regularity — lived through the best and the worst of times.

We know that right now, mining is in the trough of that cyclical wave.

We also know that the demand for metals has rarely been higher globally. As more and more developing countries industrialize, their need to access the raw materials hidden beneath the surface of the planet keeps pace.

As we produce and consume more and more advanced technologies, we have to dig up more of the unique and rare metals those technologies require.

But there’s an issue: The success rate for finding new deposits isn’t keeping pace with our demand. There’s still a place in the world for prospectors, of course, but mining companies know that what will ensure we can fulfill humanity’s global demand for metal is better science.

Planet Earth is a big, big place. There is kilometre upon kilometre of rock beneath our feet. Tucked away in that rock are pockets of the materials modern society is built upon. Somehow, we have to find it.

Enter Metal Earth, the Laurentian University project announced on Sept. 6. Described as an “MRI” for the planet, Metal Earth’s is aiming high: Create four-dimensional models of the ground beneath our feet to better understand how the planet itself formed.

The notion is quite elegant. If we can better understand how the crust, the mantle and everything in between came to be, and combine it with our existing knowledge of ore deposits, the Earth will give up its secrets. We’ll know where to crack this jawbreaker of a planet open to get at what we need.

Metal Earth is a big, bold, ambitious project with the potential to revolutionize how we — humanity, not just Canadians — find new deposits.

And Laurentian University is its home.

This week’s announcement of the creation of the $104-million Metal Earth project — a day during which LU unveiled $114 million in new investment, gifts and in-kind donations — caps off five years of major developments at the school.

Certainly one of the world’s top mining schools, Laurentian seems on track to become one of Canada’s premier institutions of research and higher learning as well.

And, in its success, Laurentian is helping put Greater Sudbury on the map as a destination for education in this country — and that is excellent for the city and its economy.

As we said, the past five years alone have seen amazing developments at the school. Not discounting the many strides forward LU has made in its 56 years, the narrow window of 2011 to 2016 has been nothing short of impressive.

A year after that, Laurentian opened Canada’s first new architecture school in 40 years.

In June, Rob McEwen, CEO of McEwen Mining and former CEO of GoldCorp, and his wife, Cheryl, gave $10 million to the School of Architecture (which was subsequently renamed in his honour).

And those are just the developments making headlines. LU boasts a talented faculty of researchers in a variety of disciplines who are contributing in myriad ways to the sum total of human knowledge.

Doctors, architects, engineers, mining experts, environmental expertise — Laurentian University is helping export the North’s talents to the world while drawing major investments to the university itself.

It’s an institution of which the city can, and should, be proud. Hats off.