Once again, southern urbanites, who have likely never seen a black bear in the wild and whose experience with the bush amounts to weekends in cottage country, believe they know what’s best for Northern Ontario.
0
Apr 22, 2014 7:44 PM By: Sudbury.com Staff 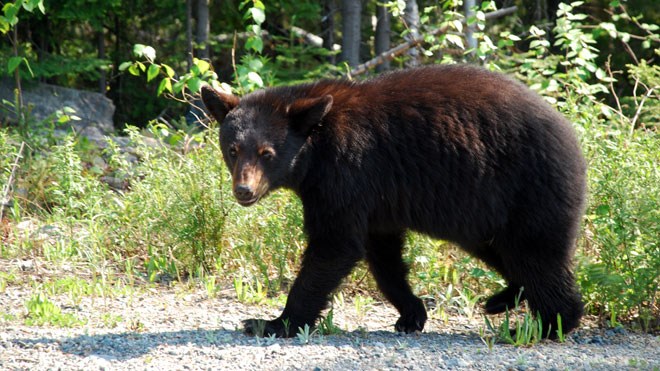 The Ministry of Natural Resources and Forestry has received at least one report of a bear, likely driven from its winter den, wandering around Garson. File photo
Once again, southern urbanites, who have likely never seen a black bear in the wild and whose experience with the bush amounts to weekends in cottage country, believe they know what’s best for Northern Ontario.

Armed with rhetoric about poor orphaned bear cubs, they mean to use the courts to force Ontario to abandon plans for a two-year pilot spring bear hunt. Zoocheck Canada and the Animal Alliance of Canada take that argument to court April 29.

Back in the fall, the Liberal government announced it was going to reverse a 15-year-old Tory decision to cancel the spring hunt to see if there was any impact on rising numbers of nuisance bears.

There’s no doubt some truth to Timmins-James Bay MPP Gilles Bisson’s (NDP) contention the move had more to do with propping up flagging Grit fortunes in the North by reversing an unpopular decision, but that’s far from the whole truth of it.

And therein lies the crux of this latest battle between animal rights groups and northerners over the spring bear hunt, a fight that goes all the way back to 1995 and two orphaned cubs from Timmins. For self-styled animal defenders, Fish and Chips, as they were cutely named, became the main characters in a narrative that portrayed northerners as boorish and uncivilized, willing to kill mother bears for sport and leave their little ones to starve.

Let’s call a spade a spade: This is a culture clash, not an animal rights issue. This isn’t about orphaned cubs; this is about hunting, and the people who prefer their meat to come from a farm, not a forest.

Given that killing a sow with cub is illegal, and the overwhelming majority of orphaned cubs result from accidental killing of the mothers, how many orphaned cubs are we actually talking about? A few dozen at most?

Kapuskasing, Elliot Lake and other northern communities have enacted stronger legislation to manage garbage — manage the trash, minimize the bears. A well-run Bear Wise program works, too, but Ontario doesn’t want to spend the $35 million on a good one.

Instead, we are saddled with a program where neither the police nor the MNR seem responsible. A major complaint of those who have made a nuisance bear call is that the police say to call the ministry, and the ministry says to call police.

When a 250-kilogram black bear is in your backyard, you want service, not buck-passing.

What’s more, and as any outfitter will tell you, most of the people hunting bear are southerners and Americans looking for trophies, not northerners looking for meat. Because the pilot hunt is only open to Ontario residents, few outfitters will benefit.

Want to fix the problem? Force municipalities to pass tough bylaws around garbage management. Fund the Bear Wise program to the level it requires and provide the MNR with the resources to deal with nuisance complaints.

Base management decisions on the best scientific data from experts who know the bush, not on political manoeuvring or pressure from slick lobby groups.

And tell all self-styled animal defenders from southern Ontario — and southern California — to confine their wildlife management practices to the region south of Barrie.