Although it might come as a surprise to some homeowners, the pipes that connect your castle to the city's lines belong to you.
0
Dec 7, 2015 2:34 PM By: Sudbury.com Staff 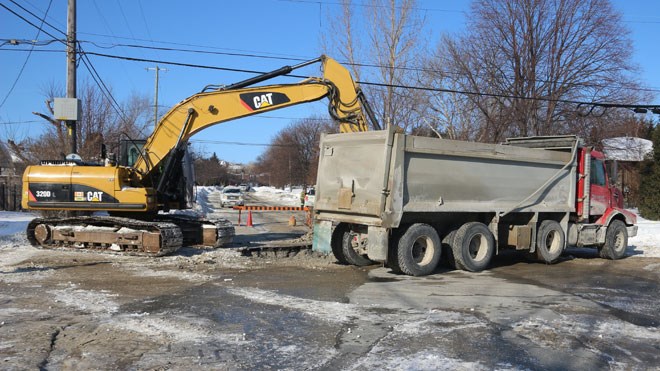 Greater Sudbury is considering backing a warranty plan for homeowners that would offer protection when water and sewer lines on their property have to be repaired. File photo.
Although it might come as a surprise to some homeowners, the pipes that connect your castle to the city's lines belong to you.

And when those pipes fail — which they do from time to time, particularly during cold Northern Ontario winters — it can cost you thousands and thousands of dollars.

Dozens of Greater Sudburians found this out during the bitterly cold winter of 2015, when house after house suffered through the costly headache of frozen pipes.

They say you can expect about a 50-year life expectancy from the lines that connect your home to the municipal system. But things happen. Tree roots puncture the lines. Cold winters wreak havoc. Clogs, collapse and rust.

If the problem is on city property, no problem — the city fixes it. But if the problem occurs on your property, you'll be stuck with an unforseen bill in the thousands of dollars.

But what if you could protect yourself should those lines fail, and for less than $200 a year? Would you take the deal?

The city is flirting with the idea of adopting a water and sewer line warranty program that protects homeowners when their pipes fail. The idea of municipalities partnering with industry to offer this type of warranty is gaining popularity in the U.S., where a couple hundred communities have signed on to offer this kind of protection.

In Ontario, only Hamilton has adopted the program, which they did in late 2014. A few months later, the Association of Municipalities of Ontario (AMO) — a resource and lobby group for this province's 444 municipalities — endorsed the idea and began offering the service to its members through Local Authority Services, an arm's length corporation of AMO.

And, in some ways, the program looks like a good one.

Protecting water lines from freezing, clogging, tree roots and collapse for up to $5,000 per incident costs a mere $55 a year. Doing the same for sewer lines will run you an extra $64 for $8,000 of coverage. An additional $73 gets you $3,000 worth of protection for the water and sewer lines in the home.

The program also costs taxpayers nothing. Kind of. There's no cost to the municipality to participate. In fact, municipal coffers would stand to benefit from the program. To give it legitimacy among property owners, the service provider insists the municipal logo appear on all documentation regarding the warranty. A stamp of approval, if you will.

In exchange for this endorsement, the city receives five per cent from sales of the warranty program. In its report to council, staff call the city's cut "non-tax revenue," which the municipality could apply to, say, keeping water and sewer rates down in the future.

What's more, the service provider generally handles all aspects of the program, from marketing to billing, customer service to contractor management. The provider also ensures work is done to code and contractors are vetted through a third-party.

It almost sounds too good to be true — for several reasons.

For one, are we as taxpayers comfortable with the city, in essence, backing a private company to sell us a financial product? And, although the staff report calls the five per cent it would receive under the program "non-tax revenue," that's really a semantic argument. The city would, after all, get a cut of the sales, and that cut comes from taxpayers' pockets.

As well, the program is basically an extended warranty, something consumer advocates say often aren't worth the expense. You pay into the program, but get nothing unless something goes wrong, which might never happen.

Which brings up the question of risk. Older homes with older pipes or lots of trees might need to use the service; newer homes, not so much. Those lines are also pretty reliable generally, so even if a homeowner needed to take advantage of it once, it's unlikely they would have to use the service again — the terms of the contracts would have to be carefully scrutinized, particularly if they lock a homeowner in for the long term.

Council needs to consider these questions if it is going to OK a private company to use a logo we paid for to sell us a product. And if council does back it, we as taxpayers better take stock and read the fine print before signing on the dotted line.