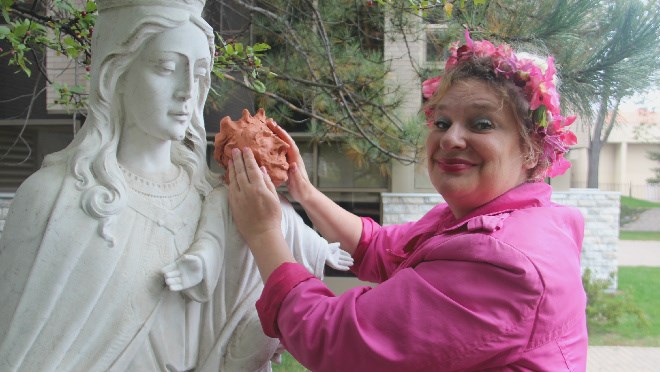 On the grounds of Ste. Anne des Pins Roman Catholic church stands a statue of Mary and Baby Jesus.

The statue was originally erected at St. Eugene Roman Catholic Church when it was built in the mid-20th century.

But when St. Eugene closed nearly a decade ago, the statue was moved to Ste. Anne des Pins, a historic downtown Sudbury church.

Its new downtown location has made it the target of vandals. Baby Jesus' head was knocked off a few times after being brought to Ste. Anne des Pins, but left near the statue.

Unfortunately, on Oct. 30, 2015, Father Gérard Lajeunesse came to work, and noticed Baby Jesus' head had been knocked off again, and this time, he couldn't find it anywhere nearby.

“I'm hoping it wasn't done out of malice. It might be somebody took on a challenge or whatever and the head fell off, and what do you do with this? A lot of things happen around here.”

The act of vandalism also happened around Devil's Night, a time when youth have traditionally played pranks, so that may have something to do with it, the priest said.

Enter local artist Heather Wise. She said she was walking on the church's grounds with a friend last winter, and noticed the missing head on the statue.

“I was so sad,” she said. “My feelings were hurt when I saw it, because I thought 'Who would do that?' It's just not a positive feeling to see that. I said 'I'm an artist, I would like to fix it.'

“My friend said 'Then why don't you? Let's walk over to the priest right now.' I knocked on the door, talked to the priest, and we've been getting this together, because we had to find out a way of doing it.”

Wise was busy fashioning a temporary head out of clay Wednesday afternoon. It will stay there until she can carve a permanent one out of stone.

The artist said she learned how to sculpt in taking the fine arts program at Cambrian College, but she's never worked with stone before.

“I am privileged and thrilled to be able to do this,” she said. “To do a statue of baby Jesus for a church is like an honour of my entire art career.”

Lajeunesse said he's grateful for what the artist is doing, because it would cost up to $10,000 to replace the statue.

“I'm very thankful that Heather offered to do this out of the goodness of her heart,” he said.

Trevi karaoke nights return July 31, with a few changes
Jul 27, 2020 2:00 PM
Comments
We welcome your feedback and encourage you to share your thoughts. We ask that you be respectful of others and their points of view, refrain from personal attacks and stay on topic. To learn about our commenting policies and how we moderate, please read our Community Guidelines.