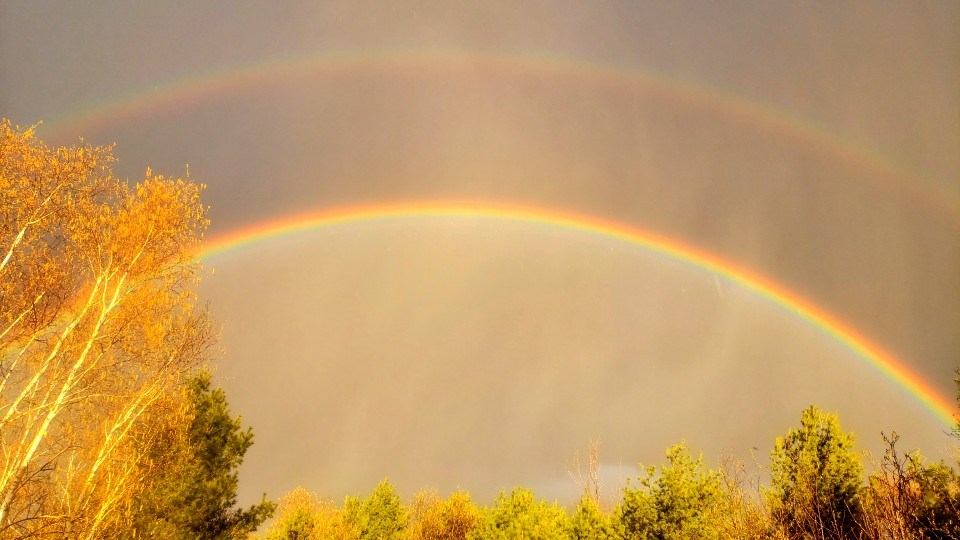 Marie-Helene Fillion got this amazing image of the double rainbow in Sudbury’s South End.Reader submission

Good morning, Greater Sudbury! Here are a few stories to start your Thursday.

Clubs lobbying province to allow golf sooner, not to include the sport if stay-at-home order is extended

With the stay-at-home order expected to end May 20, area golfers are waiting with bated breath as Ontario is considering extending the stay-at-home order into June. Sam Yawney, president of Golf Sudbury, said his golf courses opened at the beginning of April for a few weeks, but he was forced to shut them down when the province issued the stay-at-home order. He said his golf courses are in great shape, and they are ready to go when golf courses get the green light to re-open. Tom Arnott, general manager and chief operating officer of Idylwylde Golf and Country Club in Sudbury, is also the past-president of the Central Ontario chapter of the National Golf Course Owners Association, which represents 300 golf courses. It is lobbying the province to allow golf courses to reopen. Arnott said Idylwylde typically opens May 6 or May 7. Because Idylewylde is a members’ only golf course, its finances are faring well at the moment, but they are having to pay expenses with no revenue coming. Like Yawney and every other golf course owner or employee in Ontario, Arnott, too, is baffled by the province’s decision to include outdoor sports like golf and tennis in the stricter measures. Meanwhile, the Northern Golf Association told BayToday.com that lockdowns are jeopardizing the industry in Northern Ontario.

Speeder winds up busted for weapons, drugs on Regent

A 38-year-old man faces weapons charges following a traffic stop on Regent Street on May 11 at 4:03 a.m., said provincial police. Sudbury OPP said officers clocked the vehicle travelling at 48 km/h over the limit. Once they had pulled the driver over, officers reported noticing cannabis readily available to the man. He was arrested. Upon searching the vehicle, police reported finding a prohibited weapon — a set of brass knuckles — inside the vehicle. The driver, from Colborne, is charged with possession of a weapon for a dangerous purpose, driving a vehicle or boat with cannabis readily available, and speeding kilometres over the posted speed limit. He was released by way of both an Appearance Notice (CC charges) and Provincial Offence Notice (HTA/CCA charges) and will appear at the Ontario Court of Justice on Aug. 5.

Public Health Sudbury and Districts (PHSD) reports nine new cases of COVID-19 for today, Wednesday, May 12. PHSD also said there are now 84 active cases being monitored by public health officials. Also, since the PHSD began tracking COVID-19 cases just over 14 months ago, there have been 2,033 total COVID-19 cases confirmed locally. PHSD also said 1,949 of those cases have now been resolved. With respect to where the newest COVID-19 cases might have occurred, the PHSD daily update page reported that eight cases were found in the Greater Sudbury area and one case was found in the rural Sudbury District. Public Health Ontario has reported 2,320 new cases of COVID-19 today (May 12). Today's report includes 3,477 recoveries and 32 new deaths. The deaths reported today include one person between 20 and 39 years old, five people between 40 and 59 years old, 18 people between 60 and 79 years old, and eight people over 79 years old. Since yesterday, the province has reported 139 new hospitalizations and 33 new admissions of COVID-19 patients to intensive care units.There were 140,785 doses of vaccines against COVID-19 administered on May 11, which is up from 112,103 given on May 10. In total, 402,258 people have been fully vaccinated.

More than half of eligible Ontarians have received their first COVID-19 vaccine shot, deputy premier says

Deputy Premier and Health Minister Christine Elliott said in a media briefing today that more than half of all Ontario residents have now received their first dose of a COVID-19 vaccine. The province is projecting that by the end of May, about two-third of all eligible Ontarians will have gotten the shot. With an eye to tamping down on case rates in hot spot communities, the province allocated 50 per cent of vaccine shipments (more than 500,000 doses) during the weeks of May 3 and May 10, 2021 to the hardest hit areas of the province. By the morning of May 11, the province said the targeted rollout resulted, perhaps not surprisingly, in a higher percentage of vaccine coverage in those areas, with more than 54 per cent of those aged 18 and over having received their first dose in hot spot communities. The Ontario government also announced this week that as early as May 14 front-line health care workers will be eligible to receive their second dose of the vaccine through hospital clinics where they received their first dose.

Coping: Heard you can be healthier with plant-based eating? Here are a few tips to making the switch

Plant-based diets are becoming more and more popular, both from a health standpoint and an environmental one, but coping with the change can be hard. Jenny Lamothe speaks with a registered dietician on how to change your diet. Whether that means veganism, vegetarianism, Michael Pollan’s “Eat food. Not too much. Mostly plants,” or even trying to work with meatless Mondays, it is a health and wellness phrase that is becoming ever-present. Exponentially so when you add the environmental factor; our diets, as they currently exist, are not considered sustainable – there is not enough land to operate as we currently are, without even looking at the effects of climate change. Research continues to pour in, and though debates are back and forth as to which extreme is best, results are initially showing that in many cases a combination of both vegetarianism and meat-friendly may be the best way forward. But for many, that still means eating significantly less animal products than they currently are – and for some, that change can seem insurmountable. But with a focus on making changes that are sustainable to your lifestyle, as well as the environment and your health, you can find the best of both worlds, and a future for this one. One of the keys to making any diet changes is to do so gradually, said Paula Ross, a registered dietician at HeadWay clinic in Sudbury. Coping is the newest story series made possible by our Community Leaders Program.

The drive-through COVID-19 vaccination event held this week at the Superstore parking lot in Sudbury worked well, according to the Sudbury physician who organized the event with Public Health Sudbury and District (PHSD). In fact, another drive-through vaccine event will take place in about four months’ time to allow vaccine recipients to drive up for their second dose. The drive-through was held Monday and was organized by the Primacy Medical Centre in collaboration with Public Health Sudbury and Districts (PHSD). Sudbury physician Dr. Dennis Reich, owner of the medical centre at the Superstore, said he was pleased with the outcome. "Oh it went very well. I think it was a huge success. I think we did just under 700 doses. Everything went to plan," said Reich. He said there was a minor glitch at the beginning with the provincial software used to register all the vaccine takers, but other than that, the plan worked out.

Wanted Wednesday: Race Baker breached his release conditions, and there’s a warrant for his arrest

CrimeStoppers and the Greater Sudbury Police Service advise the public that a warrant has been issued for the arrest of Race Baker. On May 8, police said Baker was found in the area of Regent Street when officers attended on an unrelated matter. Baker is on strict conditions and was breaching those conditions by being in the area, police report. He ran from the police when he saw the officers, police said. Baker does have outstanding charges in the Durham region, as well, the release states. Baker is believed to be in the Greater Sudbury Area. Police advise the public not to approach him, but to call with information. He is wanted on three counts of breaching a release order.

Sun and clouds, high of 18 in the forecast for Wednesday

The forecast calls for sun today, becoming a mix of sun and cloud near noon. High 18 C. UV index 7 or high. Tonight, it will be clear with a low of 7 C.