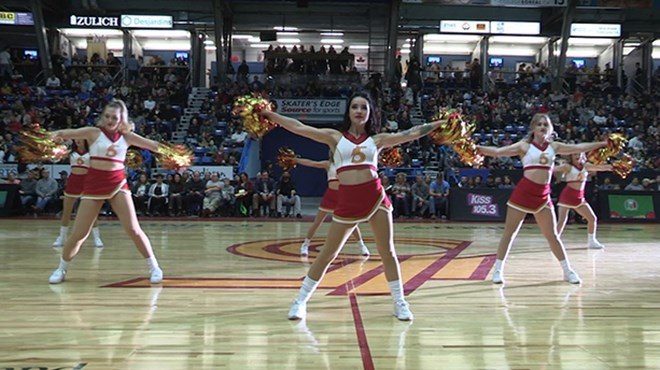 Several communities in the surrounding area experienced heavy snowfall Sunday in response to a low-pressure system moving north from Southwestern Ontario. Manitoulin Island was issued a Special Weather Statement in response, while Parry Sound received a Winter Weather Travel Advisory from Environment Canada. Conditions resulted in more than 39,849 Hydro One customers losing power, including 191 in the area of Fairbanks Lake. Read the full story here.

A robbery occured at a convenience store in the area of Lasalle Boulevard and Rideau Street Saturday, leading to heavy police presence in the area and what would turn out to be an unsuccessful dog track for the suspect. The individual, which remains at large, is described as being a white man with a medium build, wearing a grey coat, dark hooded sweatshirt and black pants at the time. Read the full story here.

OPP locate one of two suspects involved in police pursuit

One driver has been arrested while another remains at large following a short police pursuit in Sturgeon Falls last week. On Nov. 29 at 1:55 a.m., members of the Nipissing West Detachment of the Ontario Provincial Police (OPP) were on patrol when they saw two suspicious vehicles parked in a residential area in Sturgeon Falls. Read the full story here.

A pick-up truck and car were involved in a collision on Regional Road 35 in Chelmsford Saturday, resulting in delays near Elizabeth Street for a little more than an hour. As a result of the accident, the driver of the car and passenger of the pickup truck, were taken to hospital with undetermined but believed to be non-life threatening injuries. Read the full story here.

A Sudbury resident was arrested in Downtown Sudbury Friday after a drug deal was made in the presence of undercover police. According to a tweet, Greater Sudbury Police Integrated Crime Team undercover officers saw the transaction take place, identified themselves and arrested the man in question. Read the full story here.

Greater Sudbury Police have arrested a man wanted for the robbery of a Scotiabank in Dowling on Oct. 25. The arrest took place on the night of Nov. 29. Read the full story here.

Video: We hit the court with the Sudbury Five Dance Squad

Sudbury showcased a new wave of talent in 2018 with the introduction of the city's first professional basketball team, the Sudbury Five of the NBLC. The Five are known for exciting, fast-paced and high-scoring basketball, and several of the elite players have become household names. And part of that elite team, as much a part of the Five experience as the coaching and support staff, the mascot, Rock Monster, and the players themselves is the Five's own personal hype crew: the Sudbury Five Dance Squad. Find the full story and video here.

The CP Holiday Train mades its annual stop in Sudbury Friday night, bringing with it the musical talent of Scott Helman and Madeline Merlo. Crowds gathered downtown at the VIA Train Station on Elgin Street to watch the spectacle, including Sudbury.com reporter Marg Seregelyi, to capture the Christmas magic. View the full photo gallery here.

Food Bank forks out more than $253,000 to member agencies

The Banque d'aliments Sudbury Food Bank handed out more than $253,000 at their 2019 fall give on Nov. 28. The food bank holds both a spring and fall give every year, where they take the opportunity to thank their 44 member agencies and their volunteers for their ongoing efforts to feed the city's hungry and less fortunate. Read the full story here.

Cardinals and Redbirds raise $3,700 for NOFCC through morning buyout

t would be hard to find a local school with a more deeply enshrined history of school spirit than St Charles College - especially as it pertains to the world of sports. A couple of weeks ago, the New Sudbury institution combined their love of athletics and school-wide enthusiasm for a wonderful cause, hosting a morning buyout in support of Northern Ontario Families of Children with Cancer (NOFCC). Read the full story here.

Loponen wins it for the Wolves in overtime

A little less than one week after being shutout by the Oshawa Generals, the Sudbury Wolves laced up their skates for the chance to redeem themselves on home ice against the Barrie Colts. Both teams struggled to beat their opposing goaltender, bringing a steady pace to the match which ultimately led the rivals to overtime. Read the full game report here.

Mainly sunny skies Monday and a high of -1. Wind  up to 15 km/h expected to introduce a wind chill of -20 in the morning, warming to -5 in the afternoon. Clear skies overnight a low of -14.

Here are seven stories to start your day
May 29, 2020 6:00 AM
Comments
We welcome your feedback and encourage you to share your thoughts. We ask that you be respectful of others and their points of view, refrain from personal attacks and stay on topic. To learn about our commenting policies and how we moderate, please read our Community Guidelines.