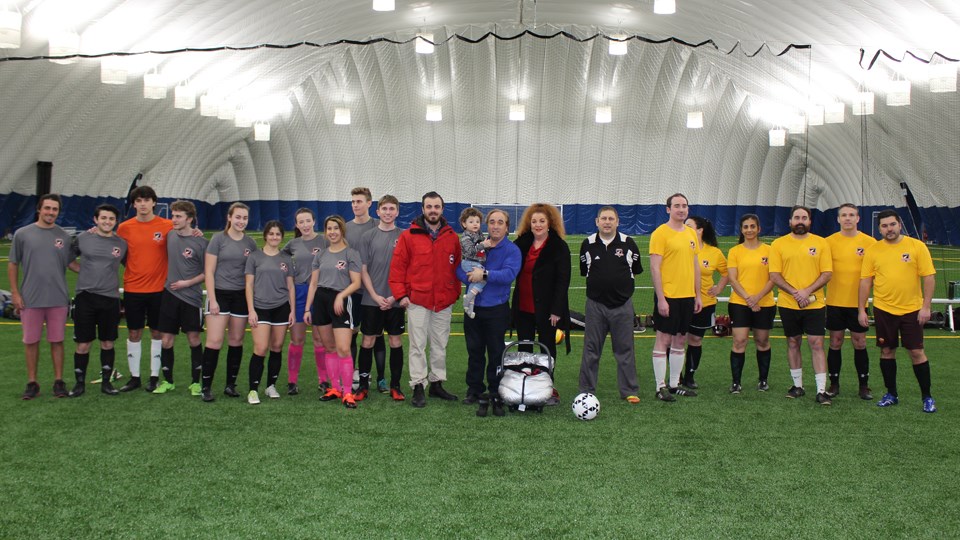 Smiles were abound on Friday night as the first official soccer game at the Fabio Belli Sports Centre kicked off. (Matt Durnan/Sudbury.com)

A Special Weather Statement has been issued for Greater Sudbury and the surrounding area in response to a snowstorm forecast for Monday evening. Total snowfall amounts between 10 and 20 cm are expected, with locally higher amounts possible. Read the full story here.

Greater Sudbury Police arrested the suspect of an attempted taxi robbery Saturday, many details of which, have yet to be released. Anyone with more information relating to this incident is asked to contact police. Read the full story here.

Smiles were abound on Friday night as the first official soccer game at the Fabio Belli Sports Centre kicked off. It's been a long time coming for Greater Sudbury to have an indoor sports centre, with numerous false starts, delays, different funding sources and proposed locations dating back as far as 2012. On Valentine's Day however, that all came to a head, as the first soccer game kicked off at 6 p.m. with members of Belli's family in attendance. Read the full story here.

The federal government will evacuate Canadians from a quarantined cruise ship docked in Japan, Global Affairs announced late Saturday, citing the "extraordinary circumstances" on board. Among them, Sault St. Marie man Jeff Pruce, who told SooToday late Saturday that he had been tested for the virus, but not received results. Read the full story here.

Bundled up with ice huts in tow, around 160 anglers and fishers set up camp across frozen Ramsey Lake Feb. 15, for the 7th annual Fishing for a Cure in Memory of Noah. Despite the bitter winter wind, the event attracted more participants than ever before, said co-ordinator Shawn Scott. He expects an even larger charitable donation than the approximate $2,500 raised in 2019. Read the full story here.

Hours of talks between the federal government and representatives of the Mohawk First Nation ended with "modest progress" Saturday evening, Indigenous Services Minister Marc Miller said as he left the meeting near a rail blockade that's shut down train service across much of Eastern Canada. He said there are steps the federal government needs to take to resolve the blockade on Tyendinaga Mohawk territory near Belleville, Ont., which was in its 10th day on Saturday. Read the full story here.

Sudbury autism parents will travel to Queen's Park on Feb. 18 to join the Ontario Autism Coalition in a protest against the Ford government's delays to the Ontario Autism Program. It has been a little more than a year since the Ford government announced sweeping changes to the province's autism program and Sudbury families are still fighting for a need-based funding model for children and youth with autism. Read the full story here.

On Feb. 14, Caledon Ontario Provincial Police stopped a driver passing a school bus 59 km/h over the speed limit. His excuse? He was late for his G license driving test. Find the full story here.

Wolves dominate in their second back-to-back win over Niagara

The Sudbury Five earned their second straight victory this past Thursday (Feb.13), winning by a hair over the London Lightning at Budweiser Gardens, 117-116. Leading the Central Division with a record of 12-4, the Lightning were no easy match, but Sudbury kept their pace. Besides a strong third quarter by London, the Five kept their competitors within a one-point range up until the final countdown. Read the full game report here.

Wolves take one final bite of the Sarnia Sting

Sudbury Wolves earned their second victory of two season matchups against the Sarnia Sting on Friday at Sudbury Arena, pushing their win streak to three. The Pack came out strong, but it wasn't until Sudbury netminder Christian Purboo took control of the net in the final frame, that Nickel City managed to push ahead to a 5-3 victory. Read the full game report here.

Bright sunny skies promised for Family Day and a high of -6. Wind up to 15 km/h to introduce a wind chill of -25 in the morning, warming to -10 in the afternoon. Increased cloudiness overnight and a low of -9, feeling more like -16 thanks to 15 km/h winds. Snow beginning after midnight accumulating to around 5 cm by Tuesday morning.

Here are eight stories to start your day
Apr 4, 2020 8:00 AM
Comments
We welcome your feedback and encourage you to share your thoughts on this story. We ask that you be respectful of others and their points of view, refrain from personal attacks and stay on topic. To learn about our commenting policies and how we moderate, please read our Community Guidelines.