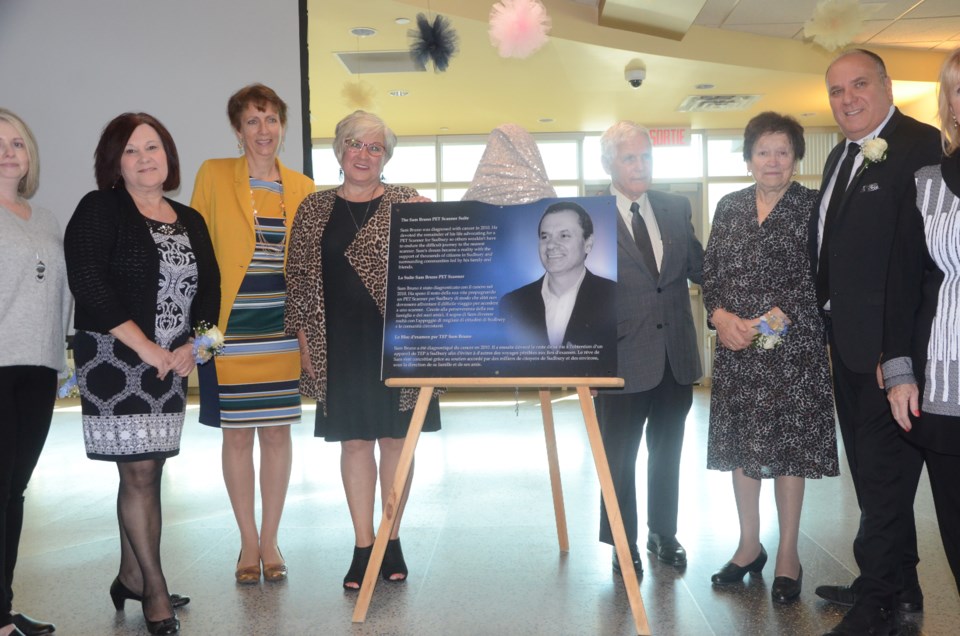 After more than a decade of lobbying and fundraising, the late Sam Bruno's dream of a PET scanner for northeastern Ontario has finally come true.

Sam's dream come true: PET scanner suite named for the man who fought for it:

After more than a decade of lobbying and fundraising, the late Sam Bruno's dream of a PET scanner for northeastern Ontario has finally come true. Now the purpose-built suite overlooking Lily Creek at Health Sciences North's Ramsey Lake Health Centre that houses the piece of diagnostic equipment he and his family fought so hard for has been named in his memory. A ceremony at the hospital Wednesday morning marked the official opening of the new “Sam Bruno PET Scanner Suite.” In celebration, Sam's brother Frank Bruno led those at the event in a toast with glasses of sambuca, an anise-flavoured Italian liqueur. Sam — who was of Italian heritage, hence the sambuca — “lobbied a lot of people over the table with a little drink of sambuca,” said Frank Bruno. More on this story here.

Byelection scandal: For the first time, Thibeault opens up about the scandal that cost him his job:

As we put a bow on this week's reflections on the Sudbury byelection scandal, the man at the centre of it all is still coming to grips with the consequences of his decision to cross party lines. With the Oct. 4 release of 'Let 'Em Howl,' a memoir by former Liberal Party campaign chair Patricia Sorbara, Glenn Thibeault agreed to talk about the lingering effects of the scandal. The 2017 criminal trial ended Sorbara's political career and did lasting damage to the reputation of Sudbury businessman Gerry Lougheed Jr. “I look at it now and think, lots of good people had their reputations tarnished because of this,” Thibeault said on a recent sunny afternoon, as we sat in a downtown coffee shop. “I think about Gerry, I think about Patricia, I think about (Premier Kathleen Wynne). “I'm not worth that – like, I'm definitely not worth the BS that everyone had to go through. I call that survivor's guilt. I had tons of that and I still do, really.” Find the full story here.

Four of the men – and one of the three women – running in the Sudbury riding were lobbed some tough questions Tuesday evening at the debate on women's issues. Held in the Sudbury Theatre Centre lounge, members of the YWCA in Greater Sudbury moderated the event, dubbed 'Up for Debate.' It's a national series of debates presented by the Alliance for Women's Rights and Gender Equality. New Democrat Beth Mairs, PPC candidate Sean Paterson, Conservative Pierre St. Amant, Liberal Paul Lefebvre and Green Bill Crumplin took prepared questions, as well as ones from the 50 or so people crowded into the lounge. Get the full story here.

Gentili: If you aren't a serious candidate, why should voters listen to you?

Sudbury.com managing editor Mark Gentili sent a message to candidates running in the 2019 federal election in his column this week: If the needs of your potential constituents aren't top of mind, perhaps reconsider your candidacy. Gentili says that there are candidates running only to give themselves a platform that forces people to listen to them. A platform or, in some cases, a pulpit. "These candidates don’t care about votes, don’t care about issues — they just don’t care about things serious candidates focus on. Their candidacies are purely selfish. They know an election can provide a captive audience upon which to unload. They distract from the very important issues voters care about," writes Gentili. "They steal time at debates from serious candidates, they tie up limited resources of media outlets who strive to provide as open a platform as possible to those running for office." Read the full column here.

Greater Sudbury Utilities received more than a dozen reports from local businesses on Wednesday, Oct. 9 of attempted fraud, posing as a disconnection warning. In most cases reported, the caller said the electricity to the business would be disconnected if money was not paid within a short timeframe, and the targets were told to meet a representative at a convenience store. They are also given a toll-free number to call to confirm the arrangements or ask questions. The toll-free number is a “spoof” which appears to be Greater Sudbury Utilities. Fortunately, the business owners contacted GSU to find out if the calls were real; they were not. "We urge all customers to be alert for attempted scams,” said Wendy Watson, Director of Communications for Greater Sudbury Utilities. “Do not give your information out over the phone. Call the local number on your bill if you want to speak with someone about your account. Do not call the toll-free phone number they give you. Do not go and meet with anyone." If you have questions about your account, call Greater Sudbury Utilities directly at 705-675-7536. If you are the victim of a fraud or attempted fraud, please contact the Canadian Anti-Fraud Centre 1-888-495-8501.

The Sudbury Wolves had a rocky start to the 2019-20 OHL season, dropping their first two games, but have bounced back to rattle off five straight wins and sit atop the Central Division. A big reason for the team's success is the play of second-year forward Quinton Byfield who has been red hot to start the season. Byfield leads the OHL in points with 16 through seven games - seven goals, nine assists. Byfield was given an 'A' grade by NHL Central Scouting on their October players to watch list, one of just eight players from the league to be given the top grade. A pair of Sudbury Wolves defensemen have also drawn the eye of NHL scouts, with second-year blueliner Jack Thompson earning a 'B' grade and second-year defenseman Isaak Phillips getting a 'C' grade.

The wonderful fall weather will continue Thursday. Sunny skies in the forecast with the high sitting at 19. Clear skies this evening with the low dropping to 3. For current weather conditions, short-term and long-term forecasts visit Sudbury.com's weather page at www.sudbury.com/weather.