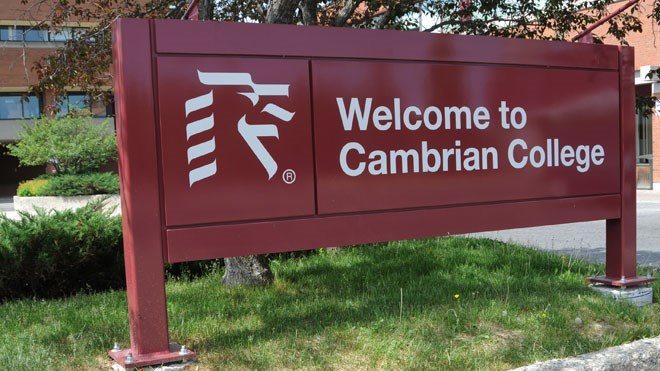 Cambrian College was informed on Monday, Oct. 5 that a member of its school community has tested positive for COVID-19.

Cambrian College was informed on Monday, Oct. 5 that a member of its school community has tested positive for COVID-19. The person was last on campus on Sept. 30 and does not live on campus and is currently self-isolating. "Out of respect for this individual we're not identifying if they were a student or faculty member," said Cambrian spokesperson Dan Lessard. "They were associated with our trades person and that area has been cleaned along with other areas they might have been." The person who tested positive contacted the school today, and a line of communication was then opened with Public Health Sudbury and Districts, who will be doing contact tracing to find out who may have been in contact with the person. Cambrian will not be shutting its doors due to the positive case. "Our classes are going ahead as scheduled," said Lessard.

Le Ledo Inc. (LLI) of Sudbury has developed the concept and business models to transform the city's planned Junction district, and it is centred around transforming one of the more run-down buildings in the city’s downtown core. At $40,000,000, the plan as envisioned will be the largest private investment into the city’s downtown. LLI has been working for a few months with an internationally recognized Canadian architecture firm on the design of what is being named ‘Le Ledo‘,” the group said in a news release today. The 0.6-acre site that is bordered by Van Horne, Elgin and Shaughnessy will reimagine the entire property with a 150,000 sq. ft. commercial development in Sudbury’s south section of the Junction district with a combination of existing uses and others allowable within the C-6 commercial zoning. The project would conform with the city’s Official Plan and the Downtown Master Plan, LLI said Monday. Full story here.

Sudbury businessman Tom Fortin has filed an appeal of a Superior Court decision that rejected his arguments that the city was biased and acted in bad faith in its decision to select the Kingsway as the site for a new area and events centre. Justice Gregory Ellies dismissed Fortin’s challenge in a 36-page decision that was released on Sept. 10. Fortin’s lawyer, Gordon Petch announced during the LPAT hearing into the Kingsways Entertainment District on Sept. 17 that they would be appealing the decision. Petch represented Fortin at the original Superior Court hearing. The appeal was filed on Oct. 2, the deadline date to file. “I am satisfied that the decision as to where the arena/event centre would be located was made after a careful study of the potential effects of locating it there, as part of a robust democratic process in which the members of city council were legally entitled to hold a view on behalf of their constituents,” said Ellies in his decision.

The pandemic is likely causing more stress and anxiety in the workplace than most of us realize and employers, co-workers and family members have to watch out for everyone's stress levels and mental health. That was part of the advice from Irene Caufield-Cook, who runs a family counselling consultancy in Sudbury. She was speaking at a lunch-hour webinar hosted by Workplace Safety North (WSN), a health and safety agency that provides safety training and certification for industry and business. The webinar was focused on managing pandemic fatigue in the workplace and was hosted by WSN community engagement specialist Angele Poitras, who told the participants that many people are suffering from what she termed as "COVID fatigue". She said the one common thread is that the pandemic is causing significant stress for most people whether at home or in the workplace. An informal poll held during the webinar showed that 15 per cent of participants regarded home and family life and having the most impact from the pandemic, while 38 per cent said it was the workplace. Only five per cent selected "other" in the poll. Forty-three per cent selected all-of-the-above. Get the full story here.

Public Health Ontario confirmed another 615 COVID-19 cases in the province Monday. Over the last seven days, the province has reported 4,283 new, lab-confirmed cases. The province has also confirmed five more deaths related to COVID, including two people over the age of 80 and two people between 60 and 79 years old. The age of the fifth person who died has not yet been reported. Of Monday's 615 new cases, 289 were reported by Toronto Public Health, 88 by Peel, and 81 by Ottawa. A little more than half (58 per cent) of the new cases are individuals under the age of 40.  There were 56 new school-related cases reported by the province today, including 31 student cases and eight staff cases. There have been 539 school-related cases (90 are more than 14 days old now) reported since school resumed, and those cases are spread across 335 schools (about seven per cent of the total schools in Ontario). There are currently three schools closed due to COVID.

Protests planned in Sudbury and across Ontario to call for increased staffing in LTC homes:

A province-wide protest is being planned for this Thursday in Sudbury and in communities across Ontario, calling on the province to resolve the staffing crisis in long-term care homes. The event is being organized by the Ontario Health Coalition (OHC), a lobby group with strong union ties dedicated to improving Ontario's public health-care system. OHC noted in a news release that the recent announcement of wage increases for personal support workers (PSWs) by the government is an increase in spending, but not enough to address the issue of getting more employees working full time in nursing homes. "There is no clear recruitment plan and they will not address the longstanding issues with lack of full-time work and poor conditions," said the OHC news release.  OHC said Quebec and British Columbia took action months ago and are doing more than Ontario. More on this story here.

Court date for man accused of murder adjourned to Oct. 15:

Denis Richer, a man who faces a second-degree murder charge stemming from an incident at a Ferndale Avenue home earlier this year, will return to court Oct. 15. Richer is accused of attacking a 45-year-old man on July 1, who died of his injuries 11 days later. Richer had been charged with attempted murder, but it was upgraded to second-degree murder following the victim’s death. At the time of the incident, police called the attack a “very violent assault.”

Sexual assault charges against Frank Marasco back in court Oct. 21:

The sexual assault case against well-known hairstylist Frank Marasco has been adjourned until Oct. 21. Marasco was arrested and charged on Nov. 28, 2019. He was the longtime operator of the salon A Touch of Class on Loach's Road. Marasco has been a stylist since 1967, according to the description the salon supplied to Google.

Mainly clouydy today with showers beginning in the morning and ending in the afternoon. Tuesday's high will get up to 13. There is a 40 per cent chance of some late afternoon showers. Mainly cloudy into the evening with rain expected overnight. Low will be sitting around 7. For current weather conditions, short-term and long-term forecasts visit Sudbury.com's weather page at www.sudbury.com/weather.

Here are six stories to start your day
Nov 25, 2020 6:00 AM
Comments
We welcome your feedback and encourage you to share your thoughts. We ask that you be respectful of others and their points of view, refrain from personal attacks and stay on topic. To learn about our commenting policies and how we moderate, please read our Community Guidelines.