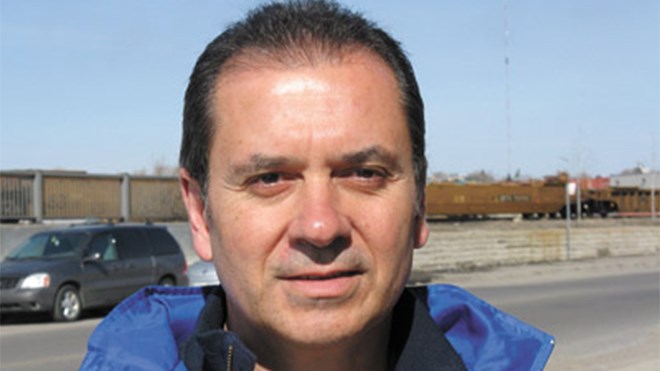 Health Sciences North holds the grand opening of its new PET scanner suite — which it has named the “Sam Bruno PET Scanner Suite” — at the Ramsey Lake Health Centre Wednesday morning. Media have been invited to tour the new suite at 9:15 a.m. This will be immediately followed by a media conference in the hospital's Rock Garden Café (cafeteria) starting at 10 a.m. Award-winning salesman Sam Bruno became the poster child for the need for a PET scanner in the Northeast after he was diagnosed with colorectal cancer. Bruno, who died at 55 in July 2010, had two PET scans during the course of his illness, both in southern Ontario. Bruno first fought for Ontarians to gain wider access to PET scans, which were at the time being used only in limited clinical trials. While travelling to Toronto regularly for cancer treatment at Princess Margaret Hospital, the indomitable Bruno began a movement to collect tens of thousands of names on a petition demanding a scanner for the Northeast. His family and friends, through the Sam Bruno PET Steering Committee formed after his death, launched a campaign that caught fire in the Northeast and went on to raise $4.3 million for the capital cost of the scanner. Sudbury.com will bring you coverage from today's launch so be sure to check back with us.

The Ministry of Natural Resources and Forestry says its conservation officers are investigating an incident of a moose being dragged on Highway 637 (the Killarney highway) last month. A video showing a cow moose kicking as it was being dragged behind a pick-up truck had been circulating widely on Facebook, sparking outrage. The video was removed from Facebook on Monday. However, a YouTube user has now uploaded the video to that platform. “Conservation officers with the Ministry of Natural Resources are aware of the video and are investigating,” said an email sent to Sudbury.com Monday by ministry spokesperson Jolanta Kowalski. “It wouldn’t be appropriate to say more while the investigation continues.” Const. Michelle Coulombe of the Nipissing West OPP confirms the incident happened Sept. 28 on Highway 637. She said the OPP is assisting the MNRF with its investigation. Anyone with information about this or any natural resource violation is asked to phone the ministry TIPS line at 1-877-847-7667 toll-free, or contact your local ministry office.

It didn't have to be this way, Patricia Sorbara says, in her interview with Sudbury.com about her new book, Let 'Em Howl: A Lesson from a Life in Backroom Politics. The Sudbury byelection scandal was a big deal five years ago, but the news cycle has rolled over many times since then. Sorbara, the former Liberal campaign director, and local businessman Gerry Lougheed Jr. were acquitted more than two years ago in a directed verdict, meaning the evidence was so weak, lawyers didn't need to mount a defence before the case was dismissed. The book itself is interesting as a guide to how Ontario politics works, and especially how everything went so badly off the rails for the Liberals after the surprise win in the June 2014 election. Sorbara comes off as someone looking for a leader to believe in, and as a calculated, even ruthless, political heavyweight who made enough enemies within the party that her acquittal in court led to a forced retirement. Get the full story here.

Watch as we team up with Rogers to talk politics over beers with the candidates:

Sudbury.com and Rogers Radio teamed up this month for a new election video series we're calling Pints & Politics. The idea was simple: to get to know the candidates in a new way. Election interviews often come across very stiff and scripted as candidates struggle to portray a certain image. We wanted to meet the candidates in a neutral location, over beer, and hope that the person behind the candidate came to the fore. Sometimes it worked, sometimes it didn't, but we had a lot of fun getting to know them. In a kind of good cop, bad cop routine, Sudbury.com editor Mark Gentili asked more serious, policy-driven questions, while Nick Liard, news director for 92.7 Rock and KiSS 105.3, asked lighter questions aimed at getting at the candidates' personalities. Check out the interviews here.

A Sudburian who now calls the City of Angels home is back in Northern Ontario this week to talk technology at the Charged 2019 event on Oct. 10. As the lead product designer for an app title Headspace, Frank Bach (formerly Frank Chartrand) knows a bit about technology. Headspace is a guided meditation and sleep app that provides courses and tools to help people learn to meditate, practise meditation on many topics like anxiety and stress, and also audio sessions to fall asleep. “Everything offered in the app stems from mindfulness — the idea of focusing on the present moment,” said Bach. The idea of Headspace has been around for more than a decade. It comes from the the minds of co-founders Andy Puddicombe and Rich Pierson, Bach said. Get the full story here.

Sudbury Five and NBL Canada schedule will be released today:

Good news, Sudbury hoops fans, the NBL Canada 2019-20 schedule will be released today. Find out when your hometown Sudbury Five will be taking the court at the Sudbury Arena this season. Opening night for the league is Boxing Day, Dec. 26. Check out NBL Canada on Twitter for the full schedule.

Here's a rude awakening for those enjoying the glorious fall weather — the Greater Sudbury Santa Claus Parade is just a little more than a month away. This year's event takes place starting at 5:30 p.m. Saturday, Nov. 16. The theme of this year's parade is “Superhero Christmas.” If you're interested in entering a float, band or marching group, applications are accepted online at www.sudburysantaclausparade.com or by phoning 705-674-4455, ext. 2453 or 2333. The deadline is Nov. 1.

Another beautiful fall day on tap today with motly sunny skies. Wednesday's high will get up to 17. Clear skies overhead into the evening. Low will dip down to the freezing mark overnight. For current weather conditions, short-term and long-term forecasts visit Sudbury.com's weather page at www.sudbury.com/weather.

Here are seven stories to start your day
Feb 26, 2020 6:00 AM
Comments
We welcome your feedback and encourage you to share your thoughts on this story. We ask that you be respectful of others and their points of view, refrain from personal attacks and stay on topic. To learn about our commenting policies and how we moderate, please read our Community Guidelines.