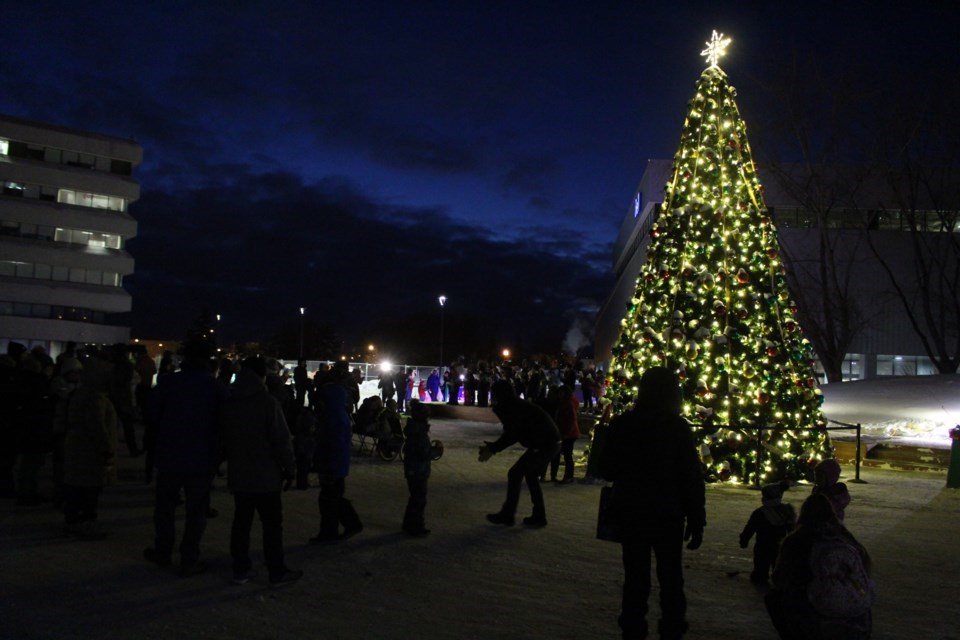 Greater Sudbury Mayor Brian Bigger is inviting residents to help him kick off the holiday season with the second annual Merry and Bright tree lighting ceremony in the Tom Davies Square Courtyard Dec. 6.

Greater Sudbury Mayor Brian Bigger is inviting residents to help him kick off the holiday season with the second annual Merry and Bright tree lighting ceremony in the Tom Davies Square Courtyard Dec. 6. The tree lighting will take place at 5:30 p.m. Friday as part of the Downtown Sudbury Christmas Market festivities. The Downtown Sudbury Christmas Market will take place from 5 to 9 p.m. on Friday, Dec. 6, and from 11 a.m. to 9 p.m. on Saturday, Dec. 7. The festivities take place in the courtyard of Tom Davies Square, but has additional adventures throughout the downtown. Visitors will be surrounded by the sights and sounds of the season, including music, lights, food and drinks for all ages. Bonfires, art crawls, handmade gifts and horse-drawn carriage rides will transform Sudbury’s downtown into a holiday experience for the whole family. The Merry and Bright tree will be on display from Dec. 6 to the week after Orthodox Christmas on Jan. 7.

Council asks police to trim $500K from their budget:

With city councillors staring at a sizable budget increase — 3.55 per cent as it stands now — they voted Wednesday to ask Greater Sudbury Police to lower their spending plans for 2020. Mayor Brian Bigger introduced a motion at the finance and administration meeting to rescind approval of the $62.95-million police budget, which councillors had passed Tuesday. Representing a 4.95-per-cent increase compared to 2019, Bigger wants the police services board to hold off on a $500,000 hike in the amount police are setting aside for a new headquarters. Police and other emergency services are looking at the possibility of sharing a space, with a feasibility study expected to begin by the end of the year. Police set aside $900,000 last year to fund debt repayments for the headquarters, an amount increasing by $500,000 each year until it hits $3.4 million in 2024. The new facility is expected to cost roughly $60 million. Bigger said delaying the $500,000 would lower the tax increase without affecting police in the short term. Full story here.

Hospital overcrowding led to 10 deaths for patients needing a transfer:

The NDP is highlighting an element of Auditor General Bonnie Lysyk's 2019 annual report that found overcrowding in Ontario hospitals over the past three years led to 10 deaths of critically ill patients who were waiting for a transfer. Lysyk's four-volume report, issued Dec. 4, tackled a number of issues related to publically funded services, including 13 value-for-money audits. One of those audits dealt with acute-care hospital patient safety. On Page 107 of that report, Lysyk examined overcrowing and bed availability, finding that from April 2016 and March 2019, 784 patients who needed a transfer from one hospital to another offering the level of care they need were denied because no beds were available. All of these patients were critically ill. Over the three years, 10 of these patients died while waiting for a bed. “Ten people died waiting, because the hospitals they needed didn’t have a bed available,” said NDP Deputy Leader John Vanthof. “No one deserves to die like that. Imagine if that was your life on the line. Imagine if that was someone you love.” The NDP pointed out that some of these patients were denied a transfer more than once.

Canada's economy is still growing, but at a projected 1.5 per cent for next year we aren't “knocking it out of the park.”  According to Trevin Stratton, chief economist and vice-president of policy and advocacy at the Canadian Chamber of Commerce, this number isn't far off from the rest of the world. In his speech at a Dec. 3 Greater Sudbury Chamber of Commerce event, Stratton identified the challenges and opportunities Canada is facing globally and at home.  To address Canada's sluggish growth, Stratton suggested fixing our tax code and regulatory systems, increasing exports, investing in innovation and infrastructure, and training a modern workforce. Get the full story here.

Nickel prices dip below US$6:

After a red-hot run earlier this year that saw nickel prices rise by 80 per cent, prices for the metal dipped below US$6 on Wednesday. Nickel was trading at $5.95 on the London Metals Exchange on Wednesday afternoon, after peaking in September at $8.17 a pound. While the rapid increase was driven by fears of an export ban by Indonesia, the country has since reversed the ban. And according to a story by Reuters, prices hit their most recent low “on concerns that an expanded and longer trade war may dent demand for the key ingredient in stainless steel and electric vehicle batteries. “Stainless steel oversupply in China, the world's top metals consumer, has also pressured nickel prices,” the story said. After announcing tariffs on steel and aluminum from Argentina and Brazil and threatening duties on French goods, the story said U.S. President Donald Trump suggested that a trade deal with China may come only after the November 2020 U.S. election. Nickel is the only base metal with gains this year, the story said, but "current actions over global tariffs have changed the driving force behind this ... price performance," said Natalie Scott-Gray, senior metals analyst at INTL FCStone.

Ask the Money Lady: Help! How do I keep Christmas from breaking the bank?

Everyone feels the financial pinch over the holiday season and most tend to buy on credit and then try to deal with the bills in January. It can be extremely hard to stick to a budget so here are some money saving tips to keep in mind this holiday season! It is best to make a list, determine a budget for each gift and stick to it. If you can’t find a gift for your price point – then opt for gift cards so that they can be used after Christmas in all the retail sales. Get some more tips from the Money Lady here.

Atkins: For Sudbury, the signs are all there:

Northern Ontario Business president Michael Atkins reflects on the 'Sudbury 2001' gathering in this week's column, touching on the culture change that it instilled in the city. "Although there were many outcomes and hundreds of people involved in individual projects associated with Sudbury 2001, the most important outcome was a change in culture. The most tangible big idea was the regreening of Sudbury. It has been an extraordinary success and recognized around the world," writes Atkins. "All levels of government, the university in particular, and all manner of volunteers had their fingerprints on this enormously successful program." Read the full column here.

Another cloudy day on tap with a 40 per cent chance of flurries in the afternoon. Friday's high will be sitting at -5, feeling like -12 with the wind chill. Mainly cloudy with 40 per cent chance of flurries in the evening. Skies will clearing near midnight. The overnight low will be -16, feeling like -22. For current weather conditions, short-term and long-term forecasts visit Sudbury.com's weather page at www.sudbury.com/weather.

Here are six stories to start your weekend
Aug 8, 2020 8:00 AM
Comments
We welcome your feedback and encourage you to share your thoughts. We ask that you be respectful of others and their points of view, refrain from personal attacks and stay on topic. To learn about our commenting policies and how we moderate, please read our Community Guidelines.