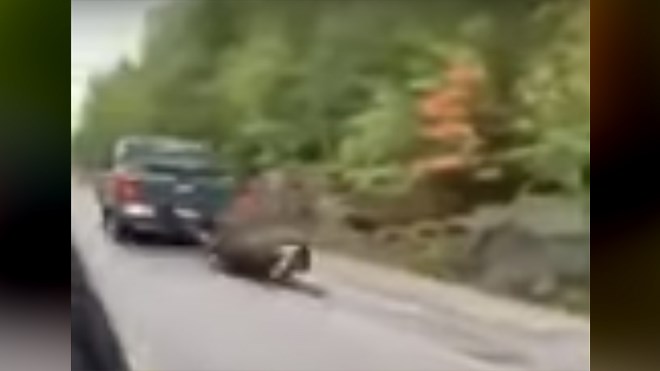 Two men who face charges after a video was posted online showing a moose being dragged behind a pickup truck made their first appearance in court Feb. 26. (File)

Two men who face charges after a video was posted online showing a moose being dragged behind a pickup truck made their first appearance in court Feb. 26. Alphonse Donald Maiangowi, 73, and Gabriel Recollet-Jocko, 18, were arrested Dec. 12 and charged with causing unnecessary suffering to an animal and careless use of a firearm. Both men are from Wikwemikong First Nation. Their matter was remanded until March 25 to allow their counsel to review all of the disclosure in the case. On Sept. 28, members of the Nipissing West detachment of the OPP received a report of a moose being shot and dragged on Highway 637, near Bell Lake Road in Killarney. A joint forces investigation with the North East Region OPP Crime Unit, the Ministry of Natural Resources and Forestry and the Wikwemikong Tribal Police with the assistance of the OPP Forensic Identification Service was conducted. The MNRF has charged both men with using a firearm carelessly to hunt, unlawfully having a loaded firearm in conveyance, unlawfully discharging a firearm in a travelled roadway and using a vehicle to hunt or injure wildlife.

2020 spring forecast: Don't pack away those winter clothes yet:

As Sudbury braces for what could be the last big snowfall of the season, the Weather Network has released its spring forecast as a beacon of hope that warmer weather is on its way. Shoulder seasons like spring and fall can be tough to predict as they are largely transitional seasons that don't see a ton of consistency. This spring is expected to arrive on time, according to Weather Network meteorologist Michael Carter, who said Sudbury should see consistent temperatures above the freezing mark by April. While days will be getting warmer as we move through March, April and May, Carter warns this spring will likely follow the trend seen over the past two months where January was unseasonably warm, followed by a cold and snowy February. "It's looking like spring is going to be pretty back and forth, just like you've seen in Sudbury this week, where it started out pretty mild and now the temperature is dipping and you're expecting a lot of snow," said Carter. "Spring is usually a bit of a bumpy ride, but it may be a little bumpier this year with temperatures bouncing up and down." Full story here.

Strike action planned for Feb. 27 by members of the Association des enseignantes et des enseignants franco-ontariens (AEFO) has been cancelled. The union represents teaching staff, short- and long-term supply teachers in all Conseil scolaire catholique Nouvelon and Conseil scolaire public du Grand Nord de l'Ontario schools, as well as the learning consultants. The districts of Sudbury, Manitoulin and Algoma were among the targeted areas. As a result, all French Catholic and public schools will be open to all elementary and secondary students. However, the Ontario Secondary School Teachers’ Federation (OSSTF), which represents support staff in all Conseil scolaire catholique Nouvelon schools and at the board office, will still conduct a one-day full strike and withdraw all services in the Sudbury and Manitoulin Districts on Friday, Feb. 28.

Get rockin' and help a senior buy warm winter clothes:

Seniors and rocking chairs go hand in hand, and that's why it's fitting, that a group whose goal it is to get seniors out and about is organizing its first 24-hour Rockathon. Since 2014, Keeping Seniors Warm has been bringing dozens of seniors out in October to purchase warm winter clothing. But the event is more than just a shopping trip, said Bev Brisco. It's an opportunity to socialize and to make new friends. Each participant is escorted by a volunteer, who takes the senior shopping. The event has become very popular, said Brisco. There's a waiting list of seniors wanting to join. “We just can't accommodate them all, so we are expanding the program,” she said. “This year, we will have two Keeping Seniors Warm events, which includes a lunch and shopping.” The group has a budget of $7,500 for the event, so doubling it means they will need twice that amount to make it successful. To date, Keeping Seniors Warm has helped over 225 seniors dress warmly during the winter months.

A student theatre group from Laurentian University is keeping the language of Italiese alive with their latest stage production. "Chi trova una nonna trova un tesoro" (Every Grandmother is a Treasure), which will run for three days only beginning this weekend, is a play written in English, Italian and something called "Italiese." Italiese is a hybrid of Italiana and English ("Inglese" in Italian). First created by immigrants who came to Canada after the Second World War, the language incorporates a mix of English words that have an Italian phonology, which basically means making an English word "sound" Italian by alteration the pronunciation and adding a vowel or two. Laurentian University language and literature professor Diana Iuele-Colilli has spent the past 20 years creating an Italiese dictionary. Her goal: to preserve a language that will be lost once her parent's generation has passed away. More on this story and video here.

CKLU pledge week is on! Listen and support community radio:

Support community radio and maybe throw a few sheckles the way of CKLU Radio 96.7 FM during pledge week this week. The annual pledge week kicked off on Monday and continues through to March 1. To support CKLU 96.7 during Pledge Week 2020, go to CKLU.ca and click on the Donate button. Acclaimed opera singer Peter McGillivray has already hosted an hour this week, as has seasoned DJ and CKLU alumni Skip Viitala, who made the trip up from Barrie to the CKLU studios to present a live broadcast of his nationally syndicated programs “Ska Party” and “Radio Hootenanny.” Our very own editor, Mark Gentili, takes over the host chair on Feb. 27 from 1-2 p.m. Gentili solicited musical choices from his wife and kids, which he’ll share throughout his hour. Expect an eclectic mix of tunes. Gentili plans on spending his hour sharing some thoughts on local issues and local news, and he invites listeners to call in with questions, or tweet questions to him on Twitter. You can find him @MarkGentili.

Two big divisional games on tap for Wolves this weekend:

Wolves Hockey action returns to the Sudbury Arena this Friday and Sunday as the Wolves get set to host two divisional opponents. The Wolves are looking to hold their division lead with the playoffs just around the corner as they get set to host the Niagara IceDogs Friday at 7:05 p.m. and Mississauga Steelheads Sunday at 2:05 p.m. Friday, the Wolves host the Niagara IceDogs for the final time this season. The IceDogs continue to fight for the final playoff position with the Kingston Frontenacs. Sunday, the Wolves host the Mississauga Steelheads in the afternoon matinee. The Steelheads currently sit six points behind the Wolves for the Division lead and are led up front by Florida Panthers prospect Cole Schwindt as well as James Hardie who leads the Steelheads offensively with 66 and 60 points respectively.

Helpers: How John Monaghan and his crew keep tradition alive at St. John’s Cemetery in Garson:

John Monaghan believes it is teamwork and a group’s synergy and drive that brings people together to accomplish great things. The beauty and serenity of St. John’s Cemetery in Garson is testament to the dedicated team of volunteers making a positive difference in a community they cherish. Monaghan, who recently turned 74 and has lived his entire life in Garson, has taken care of the local cemetery for the past 40 years. Much of that commitment has been as a volunteer during his retirement from Falconbridge Limited. He and his wife, Normina, have two grown children: Kerri, a principal with the Rainbow District School Board, and Mitchell, an underground miner with Glencore Canada. The entire family has had a hand in helping Monaghan with cemetery work and events for the past 25 years. Full story can be found here.

Snow and more snow expected for Thursday. Local blowing snow this morning with up to 5 cm falling. Winds will be gusting up to 50 km/h. Today's high is only going to get to -12, feeling like -25 with the wind chill. Periods of light snow this evening with around 2 cm expected. Overnight low will drop to -17, feeling like -27 with the wind chill. For current weather conditions, short-term and long-term forecasts visit Sudbury.com's weather page at www.sudbury.com/weather.

Good morning, Greater Sudbury! Here are 9 stories to start your day
Mar 27, 2020 6:00 AM
Comments
We welcome your feedback and encourage you to share your thoughts on this story. We ask that you be respectful of others and their points of view, refrain from personal attacks and stay on topic. To learn about our commenting policies and how we moderate, please read our Community Guidelines.