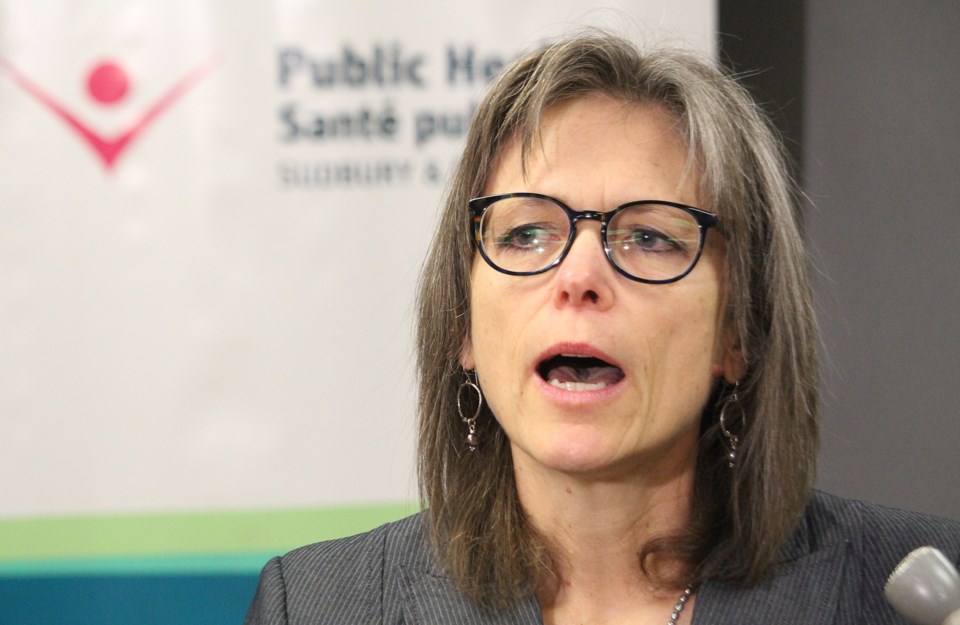 Sutcliffe: Data shows positive signs pandemic could be easing in the region:

The region’s top doc says there are positive signs the pandemic could be easing in the area, but that is not a reason to become complacent on limiting the spread. Dr. Penny Sutcliffe, the chief medical officer of health with Public Health Sudbury & District, said the region hasn’t had a new case of COVID-19 in about a week, but it’s the epidemiological data that illustrates the most positive signs. “By several indicators, things are improving in our area,” she said. For one thing, the number of positive tests among the most recent round of testing showed a rate of only 0.7 per cent positive, which is low. As well, 90 per cent of cases have been resolved. Tragically, this includes the two people who died of the illness. Sutcliffe also pointed to the prevalence of active cases, comparing the northeast rate and the provincial rate to the rate in Public Health Sudbury’s coverage area. The provincial rate of active cases sits at 38.1 per 100,000 people. In the northeast, the rate is five per 100,000. In the Sudbury and Manitoulin districts, the rate of active cases stands at 2.5 per 100,000. More on this story here.

Tractor-trailer and train collide on Highway 144:

Highway 144 was closed near Levack for an extended period of time Friday after a tractor-trailer and train collided. The driver of the tractor-trailer sustained minor injuries. The boxcars on the train were empty, but the collision derailed the train and it blocked a section of the highway. The road was slowly re-opened to a single lane of traffic at around 2 p.m. Friday afternoon.

Pickup truck driver charged with careless after crash with motorcycle on Hwy. 144: OPP:

A 22-year-old from Chelmsford has been charged with careless driving causing bodily harm after allegedly causing a collision between a motorcycle and a pickup truck on Highway 144, south of Chelmsford. Preliminary investigation revealed that around 1:25 p.m., the pickup truck was eastbound on Lavallée Road and proceeded to across Highway 144 into the path of a northbound motorcycle. The motorcycle driver was transported to hospital with serious but non-life threatening injuries. The other driver was not injured. The 22-year-old driver of the pickup truck has been charged.

Greater Sudbury Fire Services responded to a bush fire in Capreol, behind C.R. Judd Public School at around 1:40 p.m. Friday. Crews from Capreol, Hanmer and Val Therese extinguished the fire that measured roughly one hectare. Deputy fire chief Jesse Oshell told Sudbury.com that the fire was potentially started by some youth who were playing in the area. "We are requesting residents to be extremely cautious with any outdoor burning and while out in the bush area," said Oshell. "Conditions are extremely dry and we are in a high-risk fire zone according to the MNRF." Oshell also indicated that have been many careless fires over the past week.

Public Health Ontario has reported 441 new cases of COVID-19 today, which is an increase of 1.8 per cent in the province’s total cases confirmed since the start of the pandemic. The provincial update also reports 28 more deaths attributed to the coronavirus. Those deaths include one person between the ages of 40 and 59, four people between the ages of 60 and 79, and 23 people over the age of 80. The daily epidemiology update also indicates 258 more people are now considered recovered from COVID-19. However, the report states anyone whose symptom onset date occurred 14 days ago and who is not hospitalized is considered recovered for the purposes of the daily update. Those people who are reported as recovered may still be experiencing symptoms with varying severity. There have been a total of 24,628 cases of COVID-19 confirmed in Ontario, with 18,767 of those (76.2 per cent) reported as recovered. Public Health Ontario reports 2,021 people have died as a result of the virus.

There’s a Sudbury connection to the dismantling of a southern gun and drug trafficking ring:

Awesome educators: Lynne Robillard painted 30 rocks for her students, and dropped them off in their driveways:

With the COVID-19 pandemic shuttering schools this spring, educators have been thrown into an unfamiliar role — trying to teach their students at a distance. We wanted to throw a spotlight on Greater Sudbury educators who have gone above and beyond the call of duty for their students in these unusual times, and perhaps shown a bit of creativity as they engage their students. Sudbury.com asked readers for their nominations for local educators who fit this bill, and we received a nomination for Lynne Robillard, who teaches kindergarten at École Alliance St-Joseph in Chelmsford. “Mme. Lynne Robillard at Alliance St-Joseph sends her jk/sk students almost daily dojo messages saying hello, singing happy birthday (when applicable) and still teaching them the lessons pertaining to the work she sent for the week!” said a Facebook comment from parent Caroline Montpellier. “She also sends weekly links to different online games or programs and even participates in the programming of boom cards to help with their math and French skills! “She also painted rocks for every student and dropped them off in their driveways one night for them to find the next morning. Each student had an original rock with positive words. It really made my six-year-old feel special!” Full story here.