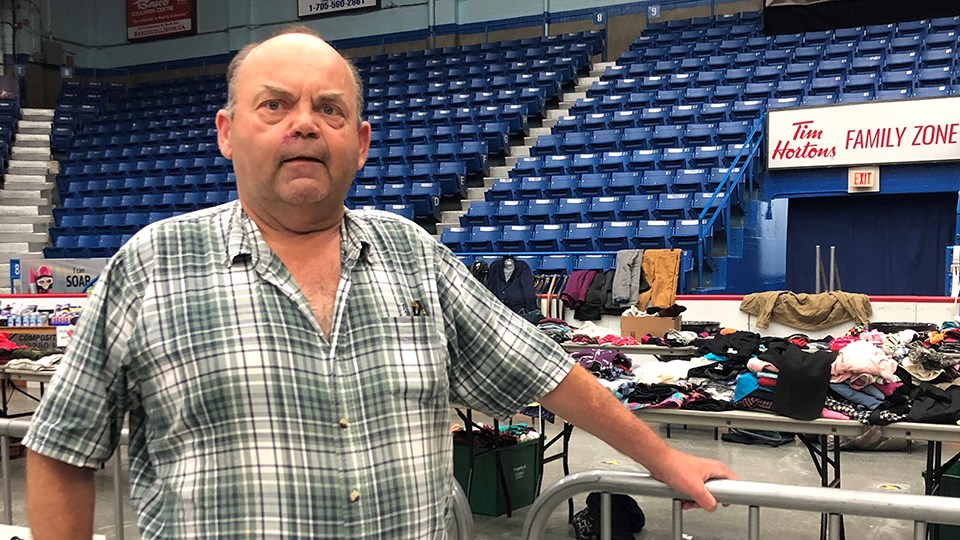 For the second time in as many weeks, Public Health Sudbury and Districts are warning the community about a spike in drug overdoses. "This situation serves as an important reminder to the community that the illicit drug supply continues to be toxic," said a news release from the health unit issued as part of last week’s drug warning. "Every batch of street drugs is different and may be cut or mixed with substances such as fentanyl or carfentanil. Even a very small amount of these substances can cause an overdose." Read the full story here.

Sudbury Arena will be transformed once again Monday morning, for Sudbury’s homeless to access clothing, accessories, personal hygiene products, as well as new shoes sized and provided by BioPed Sudbury. The "store," as it is described by program lead Bob Johnston despite the fact the goods sold are provided free to those who need them, has been named Homeless of Champions and will be serving guests on a first-come-first-serve basis for the month of June. Whether it continues beyond that point, he said, depends on the program’s success and its ongoing sustainability. Read the full story here.

A West Nipissing resident was arrested in Sturgeon Falls Thursday, but police said he didn't make it easy. On May 28 around 6:20 p.m., members of the Ontario Provincial Police West Nipissing detachment responded to report of a suspicious person on Dufferin Street in the Municipality of West Nipissing. Read the full story here.

Ontario is extending its COVID-19 residential electricity rate relief for another five months, but the fixed price will be going up by nearly three cents per kilowatt-hour. The government also said it would boost funds for retirement home residents in cases of emergency. Amendments to the regulations will allow eligible residents to receive from $2,000 to $3,500 towards costs of transportation, alternative housing or temporary care. Read the full story here.

NASA launched the historic SpaceX Demo-2 mission to the International Space Station Saturday. The launch had originally been slated for May 27 but was postponed due to poor weather conditions. The Demo-2 mission is four years in the making and marks the first time NASA astronauts will head to space on a commercial spacecraft. It’s also the first time U.S. astronauts will leave the planet on a U.S.-built vehicle since 2011. Watch the launch here.

Mainly cloudy skies in the forecast for Monday, with increased cloudiness near noon. Daytime temperatures to reach a high of 21 C. UV Index expected to be 8 or very high. Cloudy skies will carry into the night, accompanying periods of rain and a low of 9 C.

Here are seven stories to start your day
Jul 8, 2020 6:00 AM
Comments
We welcome your feedback and encourage you to share your thoughts. We ask that you be respectful of others and their points of view, refrain from personal attacks and stay on topic. To learn about our commenting policies and how we moderate, please read our Community Guidelines.