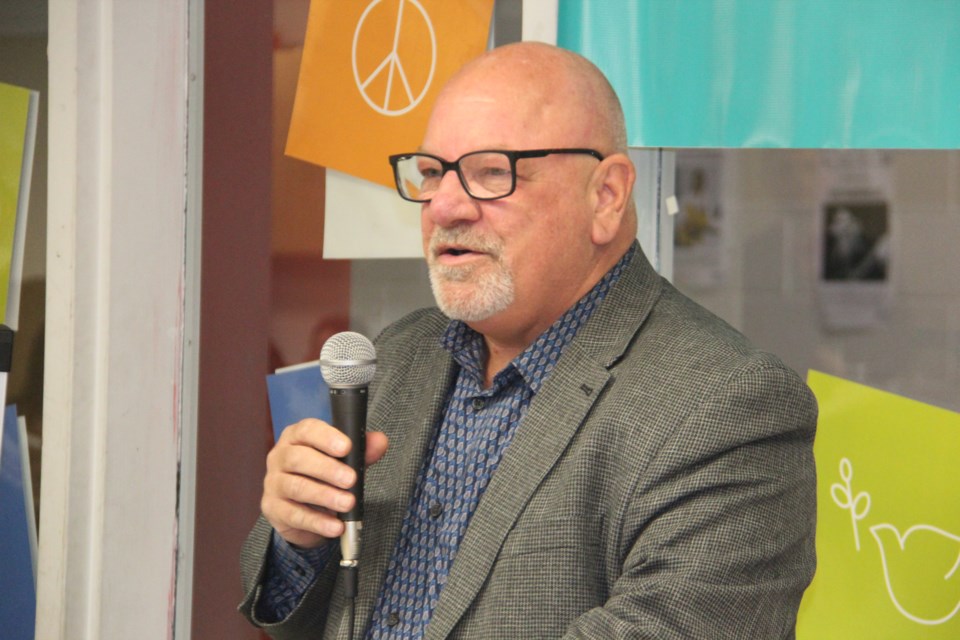 Greater Sudbury mayor Brian Bigger announced that a "task team" will be created to address the issues facing the city's downtown. There have been two violent incidents in the downtown in the past week, including a fatal stabbing on Elm Street on Oct. 14 that resulted in second-degree murder charges being laid against a 32-year-old man. One man was hospitalized on Sunday evening after being stabbed in an incident near the downtown transit terminal. A 38-year-old man was arrested and charged with attempted murder in relation to the incident. The mayor held a meeting Tuesday morning with a number of community leaders, including GSPS Chief Paul Pedersen, Medical Officer of Health Dr. Penny Sutcliffe, city CAO Ed Archer, Bylaw Service Manager Brendan Adair, and Angela Recollet, representing Sudbury's Indigenous Sacred Circle, as well as representatives from the CMHA and the downtown BIA. "We did go through quite an intense, one-hour meeting and it really set the stage for actions, and so we have a number of immediate actions that we're planning on taking," said Bigger during a telephone press conference Tuesday afternoon. "We really are working from the strength of Sudburians to work collaboratively and to find community-led solutions." The mayor didn't mince words during Tuesday's press conference, stating that "this will get worse unless we take significant action." Find the full story here.

Greater Sudbury Police have made a second arrest in relation to an Oct. 18 stabbing on Cedar Street downtown that left a man in critical condition. Just before 8:15 p.m. on Sunday, a man stumbled to the downtown GOVA transit hub profusely bleeding from a severe stab wound. Transit security provided first aid until police and paramedics arrived on scene. The man was transported to hospital in critical condition. No update has been provided on his condition since Sunday. In what GSPS said was an isolated incident, police determined the stabbing resulted from a verbal altercation outside 159 Cedar Street. After stabbing the victim, GSPS said the perpetrator fled the scene on foot. On Oct. 19, members of the GSPS Tactical Unit located the man police believe is responsible for the stabbing. He was found in a wooded area between Brady Street and Raphael Street, police said. The 38-year-old is charged with attempted murder, possession of a weapon for a dangerous purpose, uttering threats, obstructing a peace officer, failing to comply with a release order and failing to comply with a probation order. Sudbury.com has chosen not to name the man. On Tuesday, GSPS said they have also charged a second person in relation to the crime. A 29-year-old woman was arrested Oct. 20 and charged with obstructing a police investigation. Police did not name the woman, but she did appear in bail court on Oct. 20 to answer to the charge.

Public Health Ontario reported 821 new cases of COVID-19, three deaths, and 628 recoveries on Tuesday. The province reported all three deaths were individuals aged 60 to 79 years old. Of today's 821 new cases, 419 are individuals under the age of 40.  Based on a breakdown of cases by health unit, 327 of Tuesday's cases were reported by Toronto Public Health, 136 by Peel, 79 by Ottawa, and 64 by York Region. Those four health unit areas are currently under Stage 2 restrictions. The province has also confirmed 121 school-related cases today, including 75 student cases, 22 staff cases and 24 unidentified. Of the 1,429 school cases reported since the beginning of September, 793 have been reported in the last 14 days. The cases have been spread across 508 schools, and there are four schools currently closed because of COVID cases. There are 21 more cases reported in child care settings in the province today, 14 of which are child cases. There have been 323 cases reported in child care settings to date. Since Monday's report, Public Health Ontario indicated 19 more people have been hospitalized with the coronavirus and another five COVID patients have been admitted to intensive care units.

Sudbury families urged to celebrate Halloween safely if they decide to go door-to-door:

Public Health Sudbury and Districts (PHSD) hasn't taken a firm stand on whether to support or shoot down a traditional Halloween evening other than encouraging families to celebrate safely. “We know that many people are wondering what activities can and cannot happen this year,” said Dr. Penny Sutcliffe, Medical Officer of Health for PHSD, in a statement on Monday. “While we are still navigating our first Halloween in a global pandemic, I think we can all agree that we want everyone to be safe. “Changing celebratory traditions is hard, but we know we can’t let our guard down yet. The best thing we can do is continue to take steps to lower our risks by taking activities outdoors or online; by wearing masks and keeping a distance; and by gathering with your household members.” The health unit added that it will continue to watch the provincial situation in the next week or so to determine if any change is required. Full story here.

A 39-year-old Garson resident has been charged after allegedly sending threatening text messages. The East Algoma Elliot Lake detachment of the OPP were notified of the threats at 3:35 p.m. Oct. 16. The complainant reported receiving threatening text messages from a known person in the Sudbury area. After police investigation, the person was located, arrested and charged. The suspect has been charged with: Uttering threats - cause death or bodily harm, contrary to section 264.1(1)(a) of the Criminal Code (CC). The accused is scheduled to appear before the Ontario Court of Justice in Elliot Lake Dec. 1.

The LaCloche Manitoulin Business Assistance Corp. (LAMBAC) has cancelled its flagship event for 2021. The Manitoulin Trade Fair wasn’t scheduled to take place until next May, but given the ongoing safety concerns related to the COVID-19 pandemic, the economic development group said it decided to make the “tough call” to postpone the event by a year. LAMBAC made the announcement in a late-September social media post. “Every year, we look forward to connecting with our business community in the LaCloche Foothills and Manitoulin Island area at the Manitoulin Trade Fair, and sharing all of the exciting products and services that are available locally,” the post said. “But given the growing concerns around COVID-19, we’ve made the difficult decision to cancel Manitoulin Trade Fair 2021.” Held every second year at the recreation centre in Little Current – and in Espanola in alternating years – the three-day event is one of Northern Ontario's largest tradeshows. Vendors from across Manitoulin and the LaCloche Foothills, a region along the North Shore of Lake Huron, come to showcase their wares, network, and promote their services, often making sales right on the tradeshow floor. Over the three days, the event regularly attracts upwards of 8,000 visitors.

Periods of rain expected this morning ending in the afternoon, then mainly cloudy. Daytime high will be sitting at around 10 today. Partly cloudy in the evening with a 40 per cent chance of showers. Overnight low will get down to -1. For current weather conditions, short-term and long-term forecasts visit Sudbury.com's weather page at www.sudbury.com/weather.