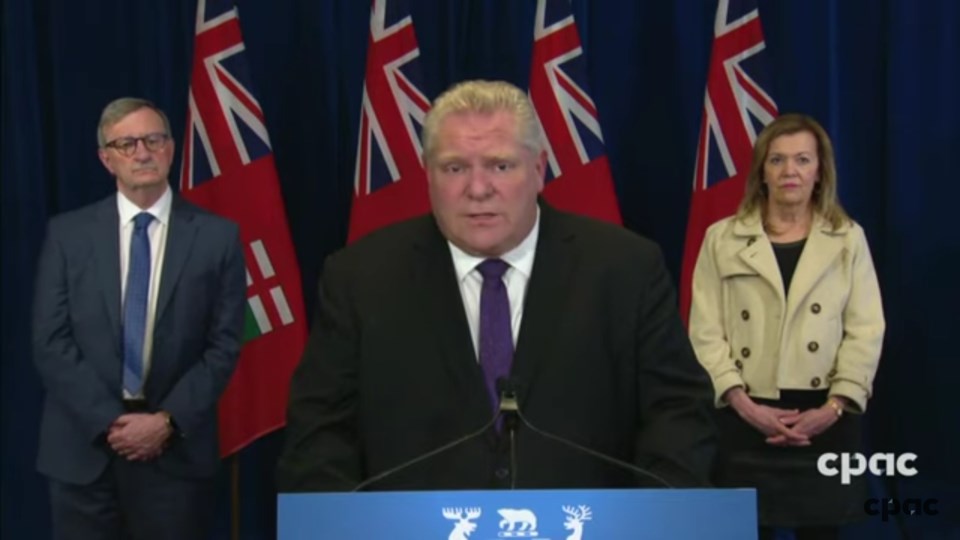 Toronto and Peel regions will be moved into lockdown on Nov. 23:

Ontario Premier Doug Ford announced Friday that Toronto and Peel regions will be moved into lockdown on Monday, Nov. 23 at 12:01 a.m. In consultation with the Chief Medical Officer of Health, local medical officers of health, and other health experts, the province is moving certain public health unit regions to new levels in the Keeping Ontario Safe and Open Framework, which includes moving Toronto and Peel into lockdown. These measures are being taken to limit community transmission of COVID-19 in order to keep schools open, safeguard health system capacity, and protect the province's most vulnerable populations. "With the numbers rising rapidly in certain regions, we have to make the tough, but necessary decisions now to protect our hospitals, long-term care and retirement homes, and every person in this province," said Ford. "We cannot afford a province-wide lockdown, so we are taking preventative action today by moving Toronto and Peel into Lockdown level restrictions and other regions into higher levels of restrictions. We need to take decisive action to stop the spread of this deadly virus." You can watch Friday's press conference here.

The province’s Special Investigations Unit has provided an update on the circumstances that led to the deaths of an OPP officer and a 60-year-old man on Manitoulin Island Thursday. The SIU said that preliminary information indicates that on Nov. 19, two OPP officers visited a property on Hindman Trail in Gore Bay after the property owner reported the presence of an unwanted man. Soon after arriving, officers located the man — who was inside a trailer — and there was "an interaction." At around 11 a.m., there was an exchange of gunfire between Const. Marc Hovingh and the man, resulting in both men being shot. They were transported to hospital where both succumbed to their injuries. Three investigators and two forensic investigators have been assigned to the case, said the SIU. Post-mortems are scheduled for tomorrow morning in Toronto. The other officer on scene did not sustain any injuries. The SIU is urging anyone who may have information about this investigation to contact the lead investigator at 1-800-787-8529. The unit is also urging anyone who may have any video evidence related to this incident to upload that video through the SIU website.

Groups who work with the downtown homeless wonder why they have been excluded from the mayor’s task team:

The executive director of the Elizabeth Fry Society of Northeastern Ontario can’t understand why organizations that actually work with the city’s marginalized downtown population would be excluded from the downtown task team set up to address the issue facing Sudbury’s core, since so many of those issues have to do with homelessness. On Oct. 20, Cory Roslyn, executive director of the Elizabeth Fry Society of Northeastern Ontario (EFSNEO) and a key member of the city’s Homelessness Network, found out that Mayor Bigger had formed and held a meeting for a task team to help in the downtown, a place where the EFSNEO and the Homelessness Network does a great deal of their outreach work and have for many years. She found out about it from a Sudbury.com article, the day after the meeting. That didn’t sit right with Roslyn, she said in an interview. Why would organizations that actually work with the downtown population not know about such a meeting, she wondered. So, she wrote a detailed letter and emailed it to Mayor Brian Bigger’s office. “Our intentions were to secure a seat at the table in hopes that the mayor would reconsider the approach of the task team from that of enforcement and criminalization, to an approach that considers real solutions to the social issues contributing to the problems downtown,” Roslyn said. She received no reply. More on this story here.

Public Health Sudbury and Districts reported three new cases of COVID-19 on Nov. 20. There are now 22 active cases, and there have been 214 confirmed cases in total since the pandemic began. All three cases are from Greater Sudbury with one case being reported as close contact with a confirmed case, and two others have exposure information pending or missing. Health Sciences North reported Friday that there are three patients at the hospital who are under investigation for COVID-19. None are in the ICU.

Edgar Burton Food Drive ‘is as important as ever’ amid COVID-19 impacts:

The Edgar Burton Christmas Food Drive in support of the Sudbury Food Bank is officially underway, and runs through until Dec. 14. This year’s organizers turned their minds to how to safely run the beloved Sudbury holiday giving campaign amidst COVID-19. Local businesses and organizations are encouraged to participate, either by collecting food donations or online financial donations. A press release said that while organizers appreciate that contactless donations may be preferable and are certainly appreciated during this unprecedented year, they continue to graciously accept food donations from local businesses and organizations who have been such an important driver behind the food drive’s longstanding success. COVID-19 protocols have been put in place to ensure that volunteers and participant safety remains the top priority throughout the campaign. Get the full story here.

The city's finance and administration committee has approved business cases to support 12 community improvement projects, including more than $5 million for the proposed Ledo Hotel renovation. Meeting on Tuesday, the Finance and Administration Committee passed a number of resolutions related to Community Improvement Plans (CIP), with business cases to be brought forward as part of 2021 budget deliberations. The total amount of grant funds requested for the 12 projects is $5,969,509, with $5.3 million for the Ledo. The approval means these projects will now be evaluated by city staff to determine their feasibility and eligibility for funding.  "What Community Improvement Plans are, are plans developed in the municipality to enhance the physical and social environment through the redevelopment, the development and preservation and rehabilitation of certain areas," Kris Longston, manager of community and strategic planning, told the committee. "They're also intended to increase employment and economic activity, and investment in the city." Full story here.

At 17, Emma Mantler is a proud Royal Canadian Sea Cadet who has been dedicated to the civilian military since the age of nine, when she first joined the Navy League of Canada as a Junior Cadet. The Cadet program inspired Emma’s path of personal development and introduced her to community service: both play an important role in her young life. Born in St. Catharines and raised in Greater Sudbury, Emma and her brother, Nolan, live with their father, Stephen, who is employed in the IT Department at Cambrian College, and their stepmother, Celina, a corporate training co-ordinator at the college. Sylvie, Emma’s mother, works at a school daycare centre; however, during the pandemic, she has remained home to care for and help school daughter, Payton, who is Emma’s half-sister. Emma first discovered Cadets eight years ago. “My mom had a friend whose daughter joined,” she said. “Molly and I are both around the same age, so we attended Junior Cadets together.” Emma’s passion for the Cadet program has only grown over the years, and she is happy that Nolan and many of the friends she made in Junior Cadets have advanced alongside her. Get the full story here.

Here are eight stories to start your day
Nov 20, 2020 6:00 AM
Comments
We welcome your feedback and encourage you to share your thoughts. We ask that you be respectful of others and their points of view, refrain from personal attacks and stay on topic. To learn about our commenting policies and how we moderate, please read our Community Guidelines.