Here's what's happening around Greater Sudbury today
May 8, 2021 8:00 AM By: Sudbury.com Staff 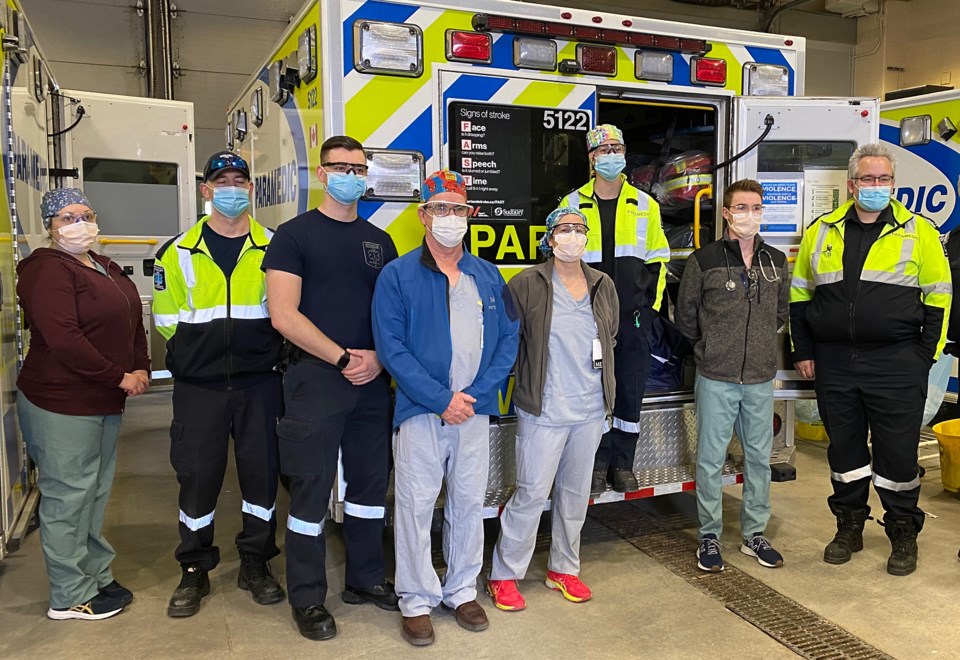 With demand increasing in Ontario for critical care beds, more Southern Ontario patients have been transferred to the Intensive Care Unit at Sudbury's Health Sciences North hospital. "COVID-19 admissions to Intensive Care Units (ICU) remain high as hospitals throughout much of Southern Ontario are bursting at the seams," said a news release from HSN.  Mark Hartman, the Senior Vice President of Patient Experience at HSN and chair of the COVID-19 Incident Command Team said the hospital is stepping up to be part of the provincial critical care effort during the pandemic,  which includes transporting patients from the south who need critical care. “So, as of May 5,  HSN and City of Greater Sudbury Paramedic Services have transported a total of six COVID-19 patients from hospitals in Southern Ontario to HSN and more transfers are expected in the coming weeks,” said Hartman. More on this story here.

Laurentian University could face consequences from the Ontario Ombudsman under the French Language Services Act for its recent massive cuts to its programs, which included more than two dozen French-language programs. French language services are constitutionally protected, said Canada Research Chair on Francophone rights and linguistic issues François Larocque. Larocque, who is also a full professor at University of Ottawa, said those services aren’t just protected for those who speak French as a first language — around 600,000 people in Ontario — but anyone fluent in the language who wishes to access services in French.  She said that new consideration takes that number to 1.2 million, according to figures from the Ministry of Francophone affairs. Full story can be found here.

‘The biggest heart’: Online donors step up for family of young Sudburian who’s at the end of life:

Online donors have stepped up to help a local family after 21-year-old Sudbury native Jonathan Cole had a sudden cardiac arrest while living in British Columbia. The young man, who is on life support as he becomes an organ donor, is in the final hours of his life. While nothing can be done to save Cole’s life, a GoFundMe online fundraiser has been set up on the family’s behalf to cover their expenses at this difficult time. His mother and stepfather, Stacy and Brent Wright, hope to bring Cole home so he can be laid to rest in his own community. Nearly $30,000 has been raised so far. Donations have come in from across the world. Find the full story here.

Public Health Sudbury and Districts (PHSD) reports three new cases of COVID-19 for today, Friday May 7 as the total number of local cases now approaches the 2,000 case milestone.  PHSD also said there are now 88 active cases being monitored by public health officials. Also, since the PHSD began tracking COVID-19 cases just over 14 months ago, there have been 1,998 total COVID-19 cases confirmed locally. PHSD also said 1,910 of those cases have now been resolved.   With respect to where the newest COVID-19 cases might have occurred, the PHSD daily update page reported that one case was found in the Greater Sudbury area, and two cases were linked to the wider Sudbury district.   In terms of possible causes of the new and recent cases, PHSD reported two cases linked to close contact of a confirmed case and one case that is under investigation. On the provincial COVID-19 register Friday, the Ontario government daily website reported 3,166 new confirmed COVID-19 cases across the province.

Sudbury’s unemployment rate up slightly in April to 8.8%

Greater Sudbury’s unemployment rate edged upward in April, to 8.8 per cent. That’s up from 8.4 per cent in March, according to Statistics Canada’s monthly Labour Force Survey. In comparison, Sudbury’s unemployment rate a year ago was at 7.0 per cent. Employment across the country fell by 207,000 (-1.1 per cent) in April and the unemployment rate rose 0.6 percentage points to 8.1 per cent, according to the LFS. With the exception of up-ticks in December, January and April, the unemployment rate has trended downward from its peak of 13.7 per cent in May 2020. Employment declined in both full-time (-129,000; -0.8 per cent) and part-time (-78,000; -2.3 per cent) work. The number of employed people working less than half their usual hours increased by 288,000 (+27.2 per cent). Following gains over the previous two months, employment in Ontario fell 153,000 (-2.1 per cent) in April.

The Samaritan Centre will be able to keep its drop-in centre operational for a full year thanks to a pair of grants from the United Way and the city. The centre has received funding from the United Way North East Ontario in the amount of $40,000 and a grant of $25,000 from the City of Greater Sudbury. The drop-in centre, open afternoons Monday to Friday, focuses on providing individuals access to communication services through computers, internet, printing and telephones. The drop-in centre has staff and volunteers on hand to assist individuals with services as well as referrals to other agencies and supports that the individual could benefit from.  “COVID has informed how we communicate and our drop-in centre exists to support our clients so that they have access to information that they need whether that is focused on housing, medical, or employment as well as connecting with loved ones and their community here at The Samaritan Centre," said executive director Lisa Long. "Communication, connection and community is at the heart of what we provide through our drop-in centre.”  The drop-in centre also serves as a hub by hosting other agencies working with the vulnerable population who offer services such as medical, harm reduction, housing intake, mental health and addictions.