Tick numbers up in city

Blacklegged ticks can carry and spread bacteria that causes Lyme disease
May 25, 2016 7:00 PM By: Jonathan Migneault 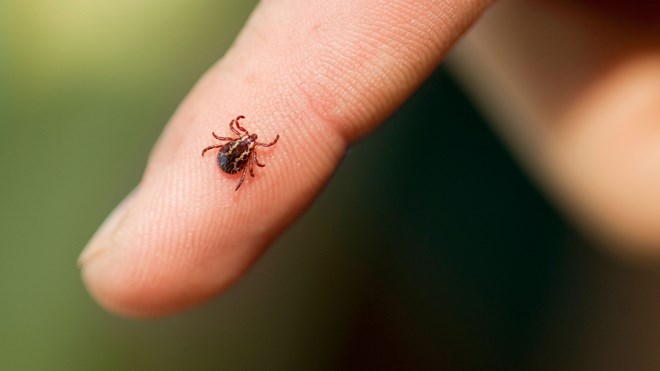 While Lyme disease is not common in Sudbury and the surrounding area, the blacklegged ticks that carry and spread the disease are becoming more common, says the Sudbury and District Health Unit. File photo.

While Lyme disease is not common in Sudbury and the surrounding area, the blacklegged ticks that carry and spread the disease are becoming more common, says the Sudbury and District Health Unit.

“We do know there is a possibility of acquiring Lyme disease in the area, but it's not something that we would say is common to the area,” said Ashley Derocchis, an environmental support officer with the health unit. “But we do see the number of ticks is increasing.”

There has only been one laboratory-confirmed human case in Sudbury, and it was detected in 2008.

But last year Derocchis said the health unit was informed about two probable Lyme disease cases – where those affected had the bullseye rash that is common within the first 30 days of infection.

Last summer the Sudbury and District Health Units submitted 29 ticks for identification and testing, to find out if they carried Lyme disease.

Eleven of the ticks were identified as blacklegged, or deer ticks that can carry the Borrelia burgdorferi bacteria that causes the Lyme disease infection.

Canada's chief public health officer, Dr. Gregory Taylor, made national headlines last week when he said he was concerned by the higher number of Lyme disease cases reported across Canada in 2015, compared to previous years.

Last year more than 700 cases of Lyme disease were reported to the Public Health Agency of Canada. In comparison, there were only 128 reported cases in 2009.

Early Lyme disease symptoms may include a rash, sometimes shaped like a bullseye, flu-like symptoms, aches and neck stiffness.

If left untreated with antibiotics Lyme disease can lead to severe and chronic symptoms that can affect many parts of the body, including the brain, nerves, eyes, joints, and heart.

If a tick is found embedded in the skin, you should use tweezers to remove it as soon as possible. Hold the tick gently with the tweezers, as close to its head as possible, and pull it out slowly. Afterwards, clean the skin area and apply a bandage if necessary. Place the tick in a container and give it to your health care provider or local health unit. They can send it to be tested for Lyme disease.

Ticks are most likely to transmit Lyme disease after being attached to the skin for more than 24 hours of feeding. One of the characteristic signs of the disease is a rash that looks like a bull’s eye: the bite area is surrounded by a round, red rash. Other symptoms of Lyme disease can include fever, headache, and muscle and joint pain. If left untreated, Lyme disease can cause serious problems to the heart, joints, and nervous system.

The health unit recommends people avoid walking in tall grass, use bug repellent with DEET when outside in wooded areas, and make sure yards are kept clear of debris and overgrown vegetation, grass, bushes, and trees to avoid getting bitten by a tick.

Protect yourself against mosquitoes and West Nile virus
Jul 9, 2020 6:00 PM
Comments
We welcome your feedback and encourage you to share your thoughts. We ask that you be respectful of others and their points of view, refrain from personal attacks and stay on topic. To learn about our commenting policies and how we moderate, please read our Community Guidelines.