Volunteer for something you love to do, and don’t feel pressured to move on from a position you truly enjoy, she says
Sep 16, 2020 12:00 PM By: Marlene Holkko Moore 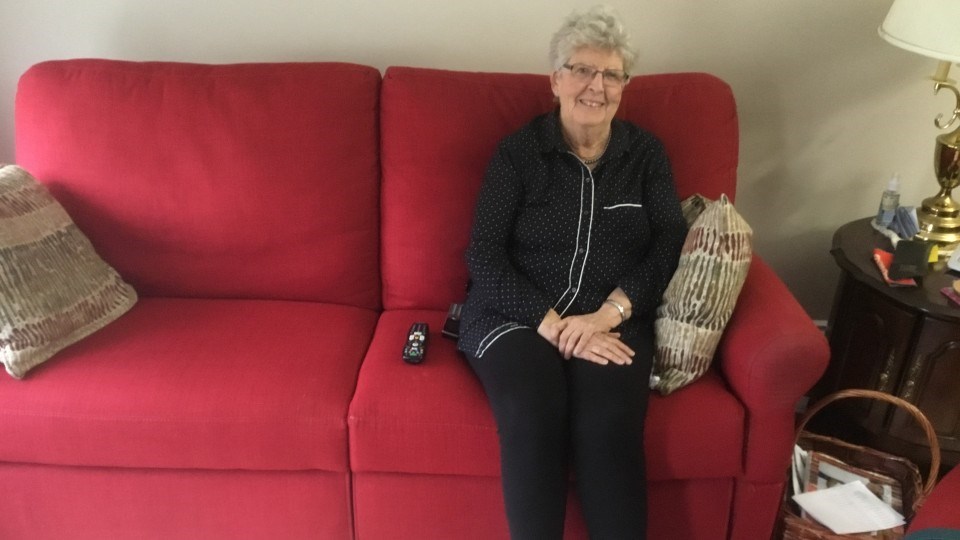 Ellen Blasutti is a longstanding, dedicated volunteer with the Northeast Cancer Centre of Health Sciences North, and says it is especially rewarding to give back to a cause or organization that you have a personal connection to. Photo supplied.

Many not-for-profit organizations have multiple volunteer roles to choose from. According to long-time cancer centre volunteer, Ellen Blasutti, when you find one that suits you perfectly, don’t feel obligated to try other roles.

“The important thing is to enjoy the position you’re in and the people you are helping,” she says.

Blasutti was born in 1932 to Arvi and Irene Koskela (nee Suomu). The eldest of four girls, she was 17 when the family relocated from Garson to Creighton. “My father, who had emigrated from Finland in his late teens, worked at Inco’s Garson Mine. We moved when he earned a promotion to rock house foreman at Creighton Mine.”

“My mother was born and raised in Garson. She was a stay-at-home mom to me and my three sisters: Arlene and Gloria have both passed away and Sandra now lives in Ottawa.”

Blasutti met her husband, Bruno, when they were both teenagers. “We dated for about six years before we married,” she said.

The Blasuttis have four children: Don, their eldest, lives in Brampton. He retired from a lengthy career as head accountant with Sears Canada. He has two sons and a granddaughter. Donna-Lynn, who retired two years ago from the City of Greater Sudbury’s CAO office, and her husband, Kevin, a Metro employee, have two daughters. Susan and her husband, Alan, live in Collingwood where they own and operate a business. Their two daughters each have two children.

Darren, the youngest Blasutti, lives in Toronto. He is CEO and president of America Silver and Gold. His wife, Angele, operates a home-based business. They have one son.

Blasutti launched her administrative career in the provincial government, where she worked for 15 years as a secretary for the Department of Highways. When she and Bruno started a family, Ellen put her career on hold for several years, then returned to the workforce as secretary in the executive offices at Sears in the New Sudbury Centre, a position she held for over 30 years until retirement in 1991.

Her husband was originally employed by Falconbridge Limited as a mine carpenter foreman. He left the company in 1965 to pursue his teaching certificate and launched his career at Chelmsford Valley District Composite School. In 1988, Bruno retired from Confederation Secondary School as technical director.

Being parents to four very active kids, the Blasuttis were busy driving their sons and daughters to sports practices and music lessons.

It was in retirement that Blasutti made the heartfelt decision to dedicate her free time to the Northeast Cancer Centre (NECC) of Health Sciences North. Over the years, the disease has directly impacted her immediate family.

Sadly, Don’s wife died of pancreatic cancer in 2015. “We were devastated. Bonnie was only in her mid-fifties.”

Blasutti was determined to help make a difference in the lives of those undergoing cancer treatment. That was 17 years ago, and she has held the same position with NECC ever since, first at the centre’s front desk and then at the patient information desk.

“From the very start, I was comfortable and confident in the role they gave me,” she said. “It was a perfect fit. I believe if you’re happy and inspired by doing what you’re doing, it’s not necessary to ‘branch out’ – trying new things isn’t for everyone.”

Every Tuesday from 8:00 a.m. to 4:00 p.m. (pre-pandemic), you find Blasutti assisting patients after they have completed their initial registration.

“I’m part of a team of volunteers that guides people, so they know what to expect,” she said. “They may have questions or are experiencing challenges operating the computer. We record their weight and deliver all paperwork to their oncologist, and then escort them to their appointments.”

Quite understandably, new patients visiting the centre for the first time have a fear of the unknown. They can be nervous, even anxious, especially if they are there on their own. “If I see someone sitting alone and it’s a quiet time at the desk, I take a few minutes to sit with them and pass the time with light conversation. They really do appreciate this simple gesture. It’s so rewarding to know you’re helping to alleviate some anxiety.”

Volunteer for something you love to do, and don’t feel pressured to move on from a position you truly enjoy. Bottom line, it’s a good feeling to know you have the privilege of helping people who need the support.

It’s very satisfying to know you’re making a difference in your community, and especially rewarding if you are volunteering with an organization you can personally relate to. For me, that’s when giving back brings the greatest joy and comfort.

Being a volunteer isn’t just rewarding, it’s inspiring
Sep 2, 2020 12:00 PM
Comments
We welcome your feedback and encourage you to share your thoughts. We ask that you be respectful of others and their points of view, refrain from personal attacks and stay on topic. To learn about our commenting policies and how we moderate, please read our Community Guidelines.