Woman turned her passion for animals into a service that brings joy to hundreds of Sudburians every year
Jul 22, 2020 12:00 PM By: Marlene Holkko Moore 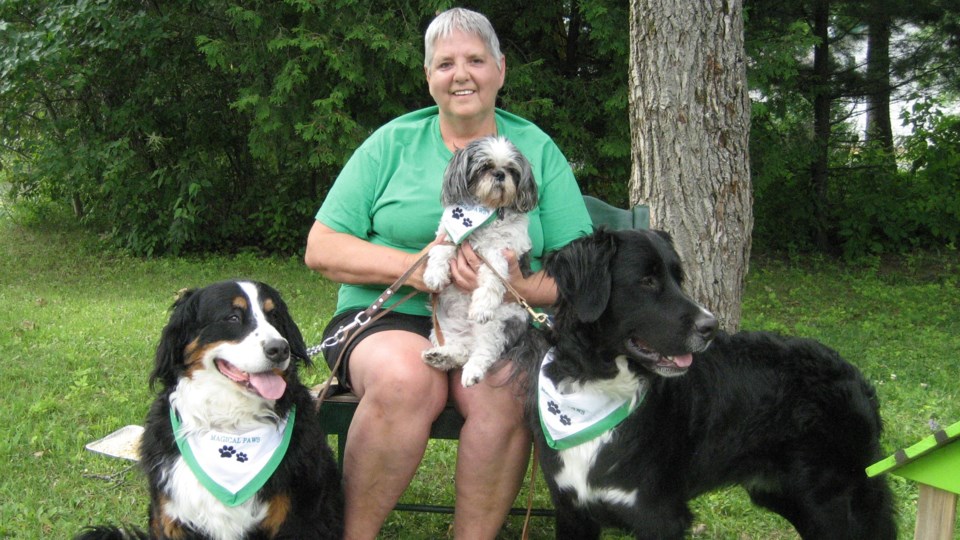 Annette Lumbis and her daughter have both been dedicated to the wellbeing of animals for many, many years. In fact, it was her daughter, Hope, and their pet, Rex, who inspired Lumbis to become a pet therapy volunteer.

Married at 21, Lumbis and her ex-husband moved to Sioux Lookout in northwestern Ontario.

“Because Charles was a geologist,” said Lumbis, “we relocated eight times before settling permanently in Garson 28 years ago.”

Hope, now 35, has been a huge influence on her mother’s commitment to pet therapy.

“Ever since she was seven years old, my daughter was interested in helping animals. In fact, at that young age, she was already mapping out how to become a veterinarian …. as well as a cashier and a teacher.”

Then, a tragic accident changed everything for the Lumbis family.

A car crash took the life of their precious dog, Sasha, and left Lumbis and her daughter injured. Despite such a serious accident, her daughter not only reached her goal to work in animal health care, she taught a course in the vet tech program at Collège Boréal.

Hope’s career path and passion inspired Lumbis to follow in her footsteps working with animals.

“After the accident, we adopted a dog. Rex became a source of emotional support. I was amazed at how much good he did for my daughter and me.”

It inspired Hope to pursue volunteering with the SPCA and, subsequently, become involved in pet therapy with Rex at St. John Ambulance.

Lumbis’ daughter became a pet therapy evaluator with the organization at a young age.

“When Hope moved away from home to attend Seneca College, I promised to continue working with Rex. That’s when I discovered just how effective pet therapy was for my own physical challenges. When I was volunteering, my chronic pain literally dropped from level six to three.

“For me, it was a lightbulb moment. Pet therapy was not only helping those we visited, but it impacted my own wellbeing, too. That inspired me to get involved full-time and, in 2011, I launched Magical Paws Pet Therapy.”

At last count (pre-pandemic), Magical Paws had 64 dogs and three cats in its program. The organization evaluates around 45 dogs each year.

The evaluation process helps the assessor determine how social the pet is and how they interact with humans, as well as with other dogs. Temperament and behaviour are observed.

“The process covers several possible scenarios that the owner and pet could encounter during a visit. It is intended to ensure the team works well together.

“For cats, it’s important that they travel well. No matter how calm and friendly they are on their own turf, a cat that becomes physically or emotionally stressed by vehicle motion will either be frightened or too upset to visit someone in an unfamiliar environment.”

Lumbis has been “living and breathing dog therapy” since 2003.

“I’m so blessed to be living with my daughter and two-year-old grandson, Mayson. Hope’s passion for animals is my passion. Over the years, we have bonded with so many wonderful dogs and cats and their pet parents.”

Of course, the COVID-19 pandemic put a stop to virtually everything. It has certainly impacted the pet therapy program, in that the dogs cannot make their weekly trips to nursing homes.

“Many of the residents are frustrated and missing our visits,”” Lumbis said. “What people may not realize is just how much the dogs also miss these weekly visits. Some members have told me their pets bring their Magical Paws bandanas to them, or cry at the door at the time they would typically make a trip to the nursing home.”

To generate hope and maintain some semblance of normalcy, Lumbis produced two six-minute videos for nursing home residents to enjoy.

“It helps lift their spirits, reuniting with their furry friends in this way, and knowing that they are doing okay.”

A Magical Paws member produced a thousand origami paper flowers and 300 paper airplanes to help celebrate Easter, Mother’s Day and Father’s Day, but local residences were unable to accept anything from outside up until June. For Canada Day, however, 250 of the flowers, along with an additional 300 note cards containing photos of the therapy dogs and messages of hope for the future were ready for delivery.

“We all look forward to the day we can resume our visits with dear friends in the nursing homes.”

Don’t be afraid to step into a volunteer activity you would never think of trying. You may find personal healing and where you truly belong. Despite my love for animals and nature, I wouldn’t have considered pet therapy, but it has become my life’s passion. After an accident that turned our lives upside down, that first step as a pet therapy volunteer literally changed life for the better in many ways.

Marlene Holkko Moore is a local communications professional and a regular contributor to Sudbury.com.

Tim Whalen has devoted 15 years to helping cancer survivors like his dad and brother
Jul 15, 2020 12:00 PM
Comments
We welcome your feedback and encourage you to share your thoughts. We ask that you be respectful of others and their points of view, refrain from personal attacks and stay on topic. To learn about our commenting policies and how we moderate, please read our Community Guidelines.