The long-time runner is involved with several causes, but still describes himself as an ‘accidental volunteer’
Jul 8, 2020 12:10 PM By: Marlene Holkko Moore 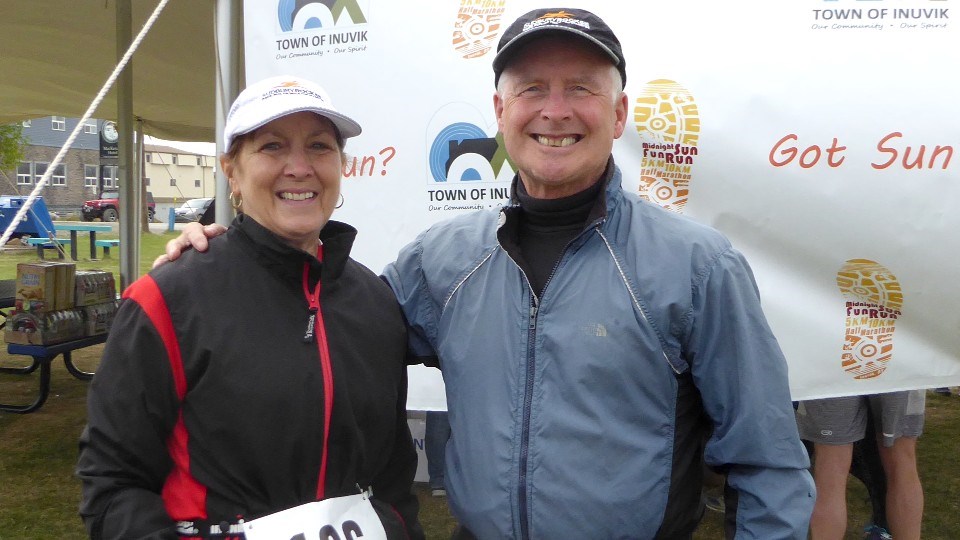 Vince Perdue and his wife, Lise, enjoy running marathons together. In 2018, they were privileged to run the annual midnight half-marathon in Unuvik, NWT. (Photo supplied)

“I’m a bit of an accidental volunteer,” says Vince Perdue when describing how he drifted into volunteering and became indelibly involved in community work.

Perdue grew up in Lindsay, a farming community in central Ontario’s Kawartha Lakes region. His family owned and operated a beef farm.

“My dad was a forward thinker,” said Perdue. “Not only did he invest in state-of-the-art farming equipment, he also provided neighbouring farmers with customized harvesting services.”

For Perdue’s Irish ancestors, farming was a way of life. His grandfather established the family farm on Pigeon Lake in 1917, where the next generations of family raised cattle.

“By the late 1960s, however, we were no longer farming and had moved to ranching. And, by the mid ’70s, our property transitioned into a Norway Spruce tree farm. The family who purchased the land from my parents still maintains and cherishes it as natural forest.”

Born in 1950, Perdue is the third eldest of 12 children. As young adults, he and two brothers settled in Greater Sudbury, having found jobs with Inco Limited (now Vale). His other three brothers and six sisters remained relatively close to the original family homestead.

A restless spirit since childhood, Perdue held many jobs from an early age, including a stint as an apprentice mechanic in Peterborough and doing construction work in B.C.

“That plus a strong work drive from my father gave my life the structure I needed to establish a stable career and set roots in Sudbury, a community that has been very good to me.”

Role models on the job for the young Perdue were more like mentors and coaches than supervisors.

“Being in our early twenties, they were like fathers to my colleagues and me. And, even though we were a generation apart, they treated us as equals. That mutual respect fostered a firm work ethic and gave us young guys the confidence to try unfamiliar tasks and pursue opportunities with the mine.”

With three decades’ service, Perdue took early retirement from the company in 2000. He had held various progressively responsible roles, retiring as safety foreman for the surface plants and office and technical areas.

“Each position I had was an important learning experience in effective communication and teamwork. Although I didn’t realize it at the time, those skills became just as important in my volunteer work.

“Early on in my career, I never really gave volunteering much thought. I was too busy working hard and saving for the future.”

However, Perdue was always physically active. He took running seriously around 1979. His good friend was a long-distance runner who clocked five miles a day six days a week.

“I thought Russ had the secret to living a long and healthy life and I wanted that, too,” Perdue said.

“My first foray into volunteering occurred by accident that year when legendary runner Norm Patenaude invited me to assist in brushing trails on the original 25-km Ramsey Tour course. That led to lots of assisting behind the scenes at many events.”

The year 1995 marked Perdue’s first official act of volunteering, when he was catapulted into a leadership role.

At Cambrian Fitness Centre, where he worked out regularly, he started a runners’ lunchtime club. Perdue put together a couple of teams to take part in a local running relay being held in Espanola.

“I would never have guessed that this would become the predecessor of Sudbury Rocks!!! Running Club. But, the numbers grew quickly from 25 to 200 and we were on our way. Many people who came on board have stayed on all these years, assisting in community sports and mentoring other runners.”

“Steve said we need to dream big and bring something big to our city—a Boston Marathon qualifier, no less, and one that makes a positive impact on our community.”

“Running for a cause not only benefits the recipient charities, it’s exciting to see new runners experience a sense of personal accomplishment that can unwittingly change their lives for the better.”

Perdue has also been involved with other events, like the July 1 Firecracker 5-km, the Salvation Army Santa Shuffle, Sudbury Fitness Challenge events and, since 1998, the CIBC Run for the Cure.

“When it comes to volunteering, I felt it was a good idea to start small and grow from there. As I learned and became comfortable, I took on more roles. Each task was a good fit, which only inspired me to do more.”

Perdue and his wife, Lise, have had the pleasure of taking part in marathons together in many parts of the world. “We’ve been to Italy, New York City, the east and west coasts and all the Territories of Canada. Meeting runners from all walks of life has been a real privilege. Fellow runners are like family, and these events are naturally inclusive.”

Mentor others to volunteer. They’ll experience personal satisfaction from giving back. Your wisdom and advice just might stick and help others get more involved in enhancing our community. Running is a really effective de-stresser because you concentrate only on the task at hand. And, when you become part of a community of runners, there is so much opportunity to learn from them and build long-lasting friendships. My dad always said it is better to give than to take. Always be the first to offer ... simple but powerful rules to live by.

Marlene Holkko Moore is a local communications professional and contributor to Sudbury.com.