New to Sudbury, volunteering helped her feel part of her adopted home 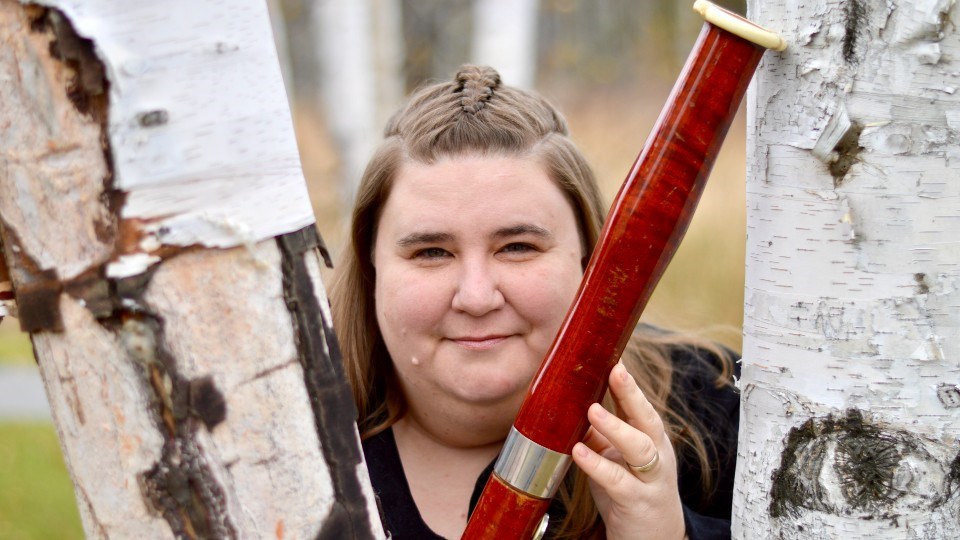 For Eleanor Sonley, volunteering right from the start as a new resident of Greater Sudbury was a way to orient herself to her new home, connect with fellow musicians, build new friendships, and continue her personal commitment to giving back to her community.

Sonley grew up in Nepean, just west of Ottawa. Her late mother, Linda, was a high school librarian, while her father, Jay (now an entrepreneur), retired from the National Film Board of Canada. Her younger sister and only sibling, Janet, resides in the Ottawa area.

“My high school geography teacher recognized a spark of talent in me and encouraged me to consider pursuing a career in geology” she said. “I enjoyed his style of teaching. It developed my interest in the incredible forces of nature. Mr. Trudel was such an inspiration to many of his students, and I was particularly proud when he attended the public lecture I gave upon completion of my doctoral thesis.”

In Boston, Mass., Sonley met her husband, Tom, who holds a doctorate in particle physics from MIT. At that time, she was conducting earthquake research at Boston University.

“Tom was a graduate student at MIT, and we met while participating in the Harvard University Summer Band.”

When they married in 2008, Tom took his wife’s surname. Upon completion of his doctoral degree, the two scientists became the Doctors Sonley.

The couple’s move from their home in Kingston to Lively took place in 2012.

Tom, who was employed as a member of a Snolab research collaboration at Queen’s University, was set to travel frequently to Sudbury to further the research goals. They decided that relocating north was a preferable family situation to requiring weeks apart while he worked in the underground science laboratory headquartered at Vale’s Creighton Mine.

Recently, Sonley established a rewarding new career outside of research. She enjoys her role with Tutor Doctor, tutoring math and science one-on-one to high school, college and university students working to strengthen their academic standing.

Having been exposed to volunteerism early in life, she began volunteering in Guides around the age of 10.

“Reflecting on my own experiences as a Brownie, Girl Guide and Pathfinder with Girl Guides of Canada, I’ve come to realize how effectively that organization and their volunteers teach important life skills and help prepare youth for adulthood. Helping the younger girls was very rewarding.”

As a graduate student, Sonley continued her volunteer work with the program Let’s Talk Science, which introduces students to a side of science not necessarily available in the classroom.

“I visited elementary schools and gave demonstrations that allowed the kids to experience science hands-on,” Sonley said. “Although the subject is part of the core curriculum, teachers rarely possess an in-depth education in the field of science – through no fault of their own. I was happy to help generate some interest in their students. I found that reaching students at a young age increased the likelihood they could develop a lifelong passion for science.”

When Sonley first moved to Greater Sudbury, she wasn’t employed, so she had time to fill.

“I heard a PSA on the radio, promoting the Canadian Cancer Society’s (CCS) need for drivers, so I signed up. After a couple of training sessions, I was able to establish a routine around my other commitments. Volunteers really do appreciate the care and consideration taken to accommodate their personal and work schedules.”

Although the Wheels of Hope (WOH) program is currently suspended because of COVID-19, Sonley remains on the roster to drive.

“My mom was a two-time cancer survivor. It’s tough to imagine how difficult it would be without family to drive her to medical appointments and support her during treatments. Driving for WOH, I’m heartened by so many stories of courage and hope.”

In the six years since beginning to volunteer with the CCS, Sonley has also assisted with receptionist and computer-related tasks. In 2015, she became involved with Relay For Life. Initially starting out at the registration desk, within a couple of years she expanded her role as a member of the event organizing committee.

“I’ve thoroughly enjoyed being the ‘point person’ for events and finding solutions to challenges in the moment.”

Sonley’s commitment to the Cancer Society led to a rather drastic move on her part. In 2019, she was publicly shaved bald as part of an effort to fundraise $1,500. Her long locks were subsequently donated to Wigs for Kids .

“It was wonderfully freeing to be without hair!”

For Sonley, volunteering is also an opportunity to nurture her love for music and the arts, and to cultivate that passion in others.

As a board member with the No Strings Attached Community Band,  Sonley, a bassoonist, and her husband, a trombonist, have been performing with this woodwind ensemble for the last nine seasons.

“We’re basically a marching band that doesn’t march,” she said.

The group is always looking for new members to experience the camaraderie and joy of performing.

“I was so inspired by one particular member who came on board after not playing her French horn for more than four decades. She took the leap and has a fabulous sound that I think surprises even herself! If you’re a musician who still plays (or not), do a little research and you’ll find many local groups that will welcome you.”

Another of her diverse interests is dog agility training. As a volunteer with the Sudbury District Kennel Club, Sonley encourages young and old to become involved in the sport.

“We’ve had high school students come out and volunteer as pole setters on the day of agility trials. It’s a great introduction to the world of dogs and their incredible range of skills.”

Life is a complicated balance of time and commitment, but volunteer opportunities help us live a happier, more productive life.

“It’s a lot of fun to get involved in the community and to do so by connecting with a variety of organizations. You might just recover a talent or find new life-long friends.”

We all know our time is valuable. Giving some of that time as a volunteer pays you treble. You see your community through a new lens, you help those who need the funds or wish to see the event, but most importantly — you will almost certainly meet kindred spirits. Find a path to give your time. It is more than worth it!

Tim Whalen has devoted 15 years to helping cancer survivors like his dad and brother
Jul 15, 2020 12:00 PM
Comments
We welcome your feedback and encourage you to share your thoughts. We ask that you be respectful of others and their points of view, refrain from personal attacks and stay on topic. To learn about our commenting policies and how we moderate, please read our Community Guidelines.